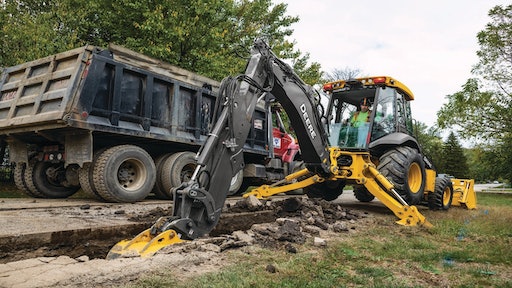 Ranging across the L-Series Backhoe lineup, the updates, which include engine upgrades, new pressure-compensated load-sensing (PCLS) hydraulics on the 310SL model and machine control improvements, enhance operation and machine performance.

One of the most notable updates, the 310L, 310SL, 315SL, 310SL HL and 410L models are now equipped with a 4.5L John Deere PowerTech EWL engine, increasing power, improving torque, and providing greater reliability. This Final Tier 4 engine results in a boost in horsepower across the models, while the removal of the exhaust gas recirculation system and components improves reliability.

Additionally, the 310SL is now available with PCLS hydraulics. Already offered on the 310SL HL, 410L and 710L, the PCLS system results in increased productivity and improved backhoe controllability at any engine speed. In addition, trenching operation can be conducted at lower engine rpm, reducing fuel consumption, and lowering job site noise.

“We are committed to continuously improving our equipment to offer our customers more value out of their machines,” said Brian Hennings, product manager, John Deere Construction & Forestry. “With these upgrades, we are directly addressing our customers’ needs. These upgrades build upon the best features found on the L-Series machines, resulting in a lineup designed to power through the toughest jobs.”

The 310SL is now equipped with lift mode. When enabled, it automatically sets the engine speed to 1,400 rpm and increases max hydraulic pressure to 4,000 psi, for up to a 10 to 15% increase in backhoe lift capacity. Additionally, buttons for the horn, selective flow, auxiliary proportional roller, and extendable dipper stick have been integrated into the backhoe pilot controls, improving ease of use.

Now available as a base offering on the 310SL, 315SL, 310SL HL, 410L and 710L models, AutoShift technology automatically adjusts the transmission to the most appropriate gear for an enhanced operator experience. Also, the five models now feature Auto Ride Control as the only ride control option, eliminating the need to manually turn on and off during load and carry applications. Auto Ride Control enhances ease of use, improves ride quality, and reduces front bucket material spillage.

Other key features include an LED boom light kit for increased visibility to the bottom of the trench and a redesigned loader lever linkage that reduces resistance and improves its throw and feel.