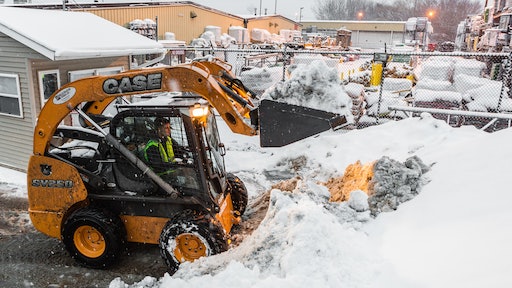 Nate’s Landscape Company is a landscaping and snow removal company located in Belgium, Wisconsin. With more than 16 years of experience, the company has been serving eastern Wisconsin since 2000.

“In Wisconsin, it's not a question of if snow is going to fall, but when,” explains Nathan Kohn, owner of Nate's Landscape Company. “We've been plowing snow commercially since 2000. Most recently, we've gone exclusive with snow and ice removal in the winter, focusing primarily on retail, commercial, and industrial snow and ice control.”

In the winter season, Kohn manages nearly 80 employees, and a fleet of 24 CASE skid-steer loaders used exclusively for snow and ice removal. “Nate's Landscape has recently transitioned into using more and more skid loaders for doing our snow removal.”

With the transition from plow trucks to skid-steer loaders, Kohn has seen a remarkable difference in both fuel and labor costs.

According to Kohn, “The reason that we've gone to skid loaders is mainly to control our costs. It’s helped us tremendously with controlling our fixed expenses, as well as our operational expenses. We no longer have to pay drivers to sit on the road in a snowstorm trying to get on site. They can report right to the site because we store the key skid loaders on the premises. The fuel and the labor is really the biggest part of the savings.”

In addition to the fuel and labor cost savings, Kohn has noticed several other benefits and operational efficiencies.

“With the advancements of box plows in the snow and ice industry, we have found that we are able to replace five plow trucks with three skid loaders. [It’s] almost twice as efficient as the old way of doing it,” Kohn explains. “Skid loaders are also a lot more maneuverable, especially in tight spaces and busy parking lots. And the visibility in a skid loader is unmatched. No plow truck has the visibility that a skid loader offers.

“There are many benefits and advantages to using skid loaders when managing snow and ice. When you're plowing with a skid loader, you can run off-road diesel fuel and not pay road tax on your diesel. Also you don't have to license a skid loader like you do a truck.”

Selecting the Right Skid Steer for the Job

As with any important equipment-buying decision, there were a large variety of criteria that needed to be met when Kohn was making his equipment investment.

“When it comes to plowing snow with a skid loader, some of the options that we like to include are the strobe light package on the roof and the radios for the guys. I believe its standard on all skid loaders that you get a heated cab, which works fantastic.”

But really, Kohn admits, “For us, number one was the quality of the machine. Is it going to hold up to what we need to do? Is it going to look good? Is the resale going to be there for us to turn these machines around down the road? Also, a big factor was our dealer.”

Working with the right dealer can make all the difference when it comes to making a smart equipment investment. Kohn has chosen to work with Miller-Bradford & Risberg Inc., an equipment dealer that has been in business since 1944, and operates seven branches throughout Wisconsin, Michigan and Illinois.

“The dealer that we use locally here does a terrific job with service calls and keeping up on warranties. The relationship we have with our CASE dealer is very good. It is very responsive to our requests for breakdowns and service. It’s also fair when it comes to trade-ins and purchasing costs. The company understands what we're trying to achieve with our fleet.”

Kohn points out that there was a deliberate decision to stick with machines below 74 HP in order to take advantage of CASE’s maintenance-free Tier 4 solutions.

Commercial snow and ice contractors often work in tight, low-light conditions where visibility is crucial. Kohn outfits all of his skid-steer loaders with roof strobes and a heavy-duty light package from the factory.

“We choose the option of the factory strobe lights and [the standard] heavy-duty light package primarily because, when we're plowing snow, it's the middle of the night, it's pitch black, it's snowing. We need as much light as we can get. We've noticed that with the extra lights on the back of the machine and the front, we have no visibility issues when we're plowing,” continues Kohn.

“When we're out at night plowing snow, it's important that our guys can see what they're doing all around them, not just in front of them. It's also important that the people in the immediate area can see them. Going with the strobe light option on the roof, these machines are visible even in heavy snows at night.”

In addition to lighting, it’s also important for operators to have a clear line of sight in all directions for their own safety, as well as those around them. CASE skid-steer loaders offer a cab-forward design with a curved rear window and sloped rear hood, as well as thin side-screens for 360-degree visibility.

“The visibility off the sides and the rear played a huge role in us choosing to switch over to plowing snow exclusively with skid loaders. When plowing snow with trucks, there are a lot of blind spots, people walk behind you and you can't see if they're there or not.”

“Rear visibility with a CASE skid loader is second to none. There's nothing there to obstruct your view from behind you. You can easily turn around, look over your shoulder and see what's behind you. The visibility in the front of the machine, especially the lower part of the windshield is nice. We can see right down, we can actually see the pavement behind the box plow as we’re plowing, so that's helped a lot with snow removal.”

CASE skid-steer loaders also provide a wide cabs and low entry threshold, making it easy for operators to get in and out of the cab, and to stay comfortable for long hours.

“It's a lot easier to get in and out of a CASE skid loader because of the lower door entry. We have a lot of different drivers that drive for us. Not all of them are Olympic athletes. We like to use guys that are retired: They're just looking for extra work and we can put them to work in a CASE. They don't have to be a gymnast to get in and out of the cab.”

Long hours behind the controls of a skid steer can lead to operator fatigue, which can have a negative effect on an operator’s focus and productivity. Kohn chose to outfit all of his skid-steer loaders with CASE’s EZ-EH electro-hydraulic controls—an advanced control system that provides a setup menu with nine adjustable speed and control sensitivity settings.

“All of our skid loaders we ordered with the EZ-EH controls. The operator fatigue is greatly reduced with just the joystick operation. We've gotten away from using any foot pedal or forward hand-to-hand, side-to-side operating machines. Our operators found that they can run many, many hours in a skid loader with these EZ-EH controls and not have the fatigue of an old machine.”

Nathan Tiegs has worked for Nate’s Landscape as an operator for nearly five years and is currently managing a snow removal crew of 15 operators across 25 commercial accounts.

“Nate’s Landscape is a great company to work for,” Tiegs says. “I’m currently in college studying to be a fireman and the company works around my college schedule, so I really appreciate that. This is the first year I’ve been working as a manager—I’ve got about 25 accounts. I just really like being outside, working as a team, going out there and getting it done.”

With the recent transition to a full CASE fleet, Tiegs has noticed several benefits and advantages, such as standardization of training.

“The owner, Nathan Kohn, had several CASE wheel loaders and I know he really liked them. Finally, he just got all CASE machines, standardized everything. Now when we have training and orientation, you can go to any jobsite and the skid loader is going to be the same. It’s really nice that you can put anybody anywhere, because we have accounts from Mequon all the way up to Manitowoc and Plymouth, Wisconsin.“

“We have 24 CASE skid steer loaders that we keep at all of our big job sites. The joysticks are phenomenal—you can get into really tight spaces, where with other skid-steer loaders, you really can’t,” explains Kohn. “That’s really what our business is about—having the lot as cleared as possible at the end of the day to make the customer happy.”

“I started off with foot pedals, and if you’re in a snowstorm, working foot pedals would drive you insane because it’s constantly up and down—your feet can get really tired. In the beginning, I thought getting used to [the joysticks] was going to be a lot harder because I was used to foot pedals, but after about a half-hour of learning the joysticks, it’s by far better than the foot pedals. With the joysticks, you can actually get closer to things, precisely back-drag and maneuver around cars—I could never go back to foot pedals.”

“Other skid loaders are more touchy—you move a little and the whole thing sways, but with CASE, the machines are really precise. You can easily come into something and back-drag, and it’s really simple without a bunch of jumping around.”

“The visibility is phenomenal—left, right, back, forward—you can see everything. The front is most important, when we put our pushers on, we’ve got to be able to see our drop hits. You’ve got great visibility in the front to make sure that you can see down so you know you’re in the right spot.”

Running and developing Nate’s Landscape Company over the last 16 years, Kohn has learned that the best way to ensure profitability is through effective management of his overall operating costs.

“Over the last several years of running my business, just like any business, we've been through highs and lows, good times and bad times. We've learned to do a better job of controlling our costs, both our fixed expenses and our operational expenses. We're just finishing off a winter season with below average snowfall. We've been able to control our costs by running the CASE skid loaders. It has been a big part of our business plan.”