Did the polar vortex and its freezing temperatures wipe out the Emerald Ash Borer? 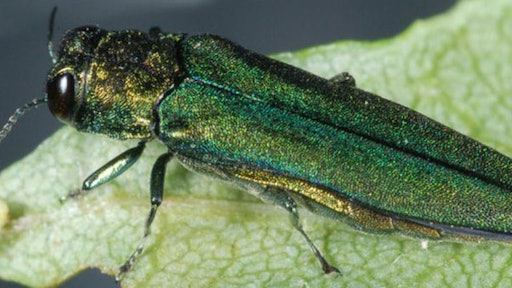 The Emerald Ash Borer, pictured, is one of the most destructive invasive species ever encountered by arborists.
USDA Forest Service Photo by Dr. James Zablotny

With some news stories suggesting that a majority of invasive species across the United States have been greatly reduced in numbers because of rare frigid temperature this winter it is understandable that some folks might think the battle of the invasive is close to being won. That assumption would be incorrect, mainly because the survivability of certain invasive bugs like the tenaciously destructive Emerald Ash Borer, or EAB.

First discovered in North America in the Detroit area in 2002, the bright green, tree-chomping- EAB-mini-beast is believed to have arrived in the states via shipping crates from China, where the bug originated.

EAB larvae kill ash trees by tunneling under the bark and feeding on the part of the tree that moves water and sugars up and down the trunk. And it’s really good at the job. In fact, millions of ash trees both in Canada and the United States have been completely decimated. Entire neighborhoods once flush with ash trees have been left barren in an almost desert-like landscape because all these trees for miles around are gone.

But you can fight back. One advantage we have is the advancement of tree science, which was in its nascent phase when near entire species, like the American chestnut, were felled by an Asian fungus in the early 20th century. Now scientists can more effectively and efficiently assess how to quarantine and treat affected trees. I know this because I did it.

I had three older-growth ash trees that were infected with EAB. They were stunning backdrops in my backyard, and I didn’t want to lose them. So, I called an arborist to see what could be done. Since the trees were already infected, there was a 50/50 chance that treatment would be successful. It wasn’t cheap, but at $1000, it would be more cost-effective to work to save the trees than to pay three times that – or more – to have them removed.

I rolled the dice… and the treatment worked. Hopefully, I won’t have to retreat the trees, but I’m keeping a close eye for signs of reinfection – the most obvious being woodpeckers. These iconic birds like to dine on EAB, and they are one of the best indicators of an infected tree.

Unlike my situation you can get ahead of EABs even before you see signs of infection. Arborists recommend you have trees treated to immunize them– not unlike getting a flu shot. There are several different chemicals that are used so check with an arborist to see what they’ll be using and how effective it is as an EAB deterrent.

You can also do your part to limit EAB’s spread by immediately removing, by either burning or chipping, any infested wood material, especially ash firewood, logs, and pruning debris that died due to EAB.

So, has the polar vortex come to the rescue as some might hope? The answer is yes and no. Research conducted by the USDA Forest Service after the last frigid temperatures of a visiting polar vortex showed that nearly 70 percent of EABs were killed off. But even if that is the case this year, that still leaves 30 percent or so still very active and very destructively alive – so look for those woodpeckers!