The better you understand the advantages of late-fall fertilization, the better you can implement your own program, and market it to both potential and existing customers. 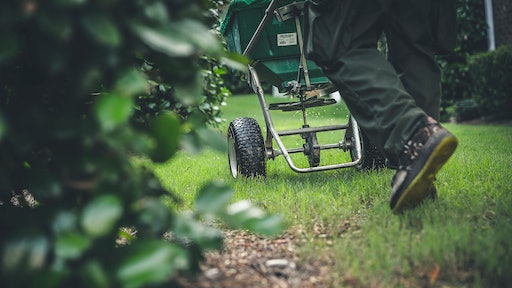 Late-fall fertilization has been a best practice in the industry for decades. Most understand that cool-season turf fertilized in September, and again during October, November or December generally produces better fall and winter color than a turf that was not fertilized at that time.

What’s not as well-known is why this fertility practice is integral to a healthy lawn, how to optimize the limited application window and all of the other benefits. The better you understand late-fall fertilization and its advantages, the better you can implement your own program, and market it to your customers and potential customers.

The most obvious benefit—and most enjoyed by customers—is that spring green-up may occur up to two to six weeks earlier than turf not fertilized during the previous fall. Most importantly, this rate of spring greening occurs without stimulating the excessive shoot growth that accompanies the early spring nitrogen applications called for in most turf fertility programs.

The difference in color between late-fall fertilized turf and turf that does not receive a late-fall application is the duration of consistent green color from fall through spring. The winter color of turf grass fertilized only during the spring and summer is typically inferior to that of turf grass that received an application or applications the previous fall. The slower rate of spring green-up for non-fall-fertilized turf means acceptable color is usually attained only after nitrogen is applied during the early-spring March or April timeframe. Although turf color eventually catches up to that of late-fall fertilized turf, the excessive shoot growth that accompanies spring fertilization is often undesirable.

Root growth levels generally increase from late summer through fall and again in the early spring, while plant carbohydrate (energy) growth patterns typically reach their peak in the fall before declining. This decline can be significant when the turf receives a nitrogen application in March or April compared to turf grass that was not fertilized since the previous fall.

The rapid decline occurs because carbohydrates, the plant’s energy source, are needed to support the increased shoot growth resulting from nitrogen applications made early in the season. The more slowly growing late-fall fertilized turf may possess a larger carbohydrate reserve during the spring period and has a greater energy pool to fuel growing turf grass.

Turf grass that was fertilized in late fall accumulates carbohydrates during the fall and winter months, with levels reaching a peak during the September to December period. This turf’s ability to store energy during the spring is a result of the earlier greening realized through late-season nitrogen fertilization. Photosynthesis still occurs in the slowly growing turf plant, allowing it to accumulate carbohydrates.

The higher carbohydrate reserves found in turf that received late-fall fertilization may offer advantages into the summer months. The higher levels of carbohydrates are desirable during the hottest times of the year since they provide the turf grass with greater stress tolerance and increased ability to recover from stress-induced damage.

Another advantage of a late-fall fertilization application is the potential cost savings that may be realized by using less product (nitrogen) in the spring. Because turf fertilized in the late fall typically comes out of winter at a higher quality and with increased carbohydrate reserves, it usually requires less nitrogen in the spring. Depending on the agronomic condition of the turf, you may be able to put down less than the standard pound of nitrogen per 1,000 square feet of turf. This translates to healthier turf grass for your customers and cost savings for your business.

Late-fall fertilization is different than dormant and/or winter fertilization. The latter method implies fertilizer is applied after the turf has lost most or all of its green color, and has gone dormant. This is distinct from the late-season application, which requires nitrogen to be applied before the turf loses its green color. Therefore, it is essential that the turf be green when the late (October or November) nitrogen application is made. This means that approximately 0.75 to 1.0 pound of quickly available nitrogen should be applied during the latter half of August through mid-September. This ensures that the turf grass remains green late into the season when the late fall application is made.

It is also important that excessive shoot growth not be encouraged by over-application of nitrogen during the late-fall application. The production of lush, succulent growth may increase the chance of snow mold diseases during the winter and following spring.

Implementation of cultural practices should also factor into your timing. Complete any aeration, seeding and dethatching before putting down your fertilization application. These practices provide year-round wide-ranging benefits, such as allowing the nutrients found in fertilizer to permeate turf, and are especially important in the late fall to promote healthy turf going into dormancy.

Although PCSCU and PCU are referred to as controlled-release nitrogen sources, the rate of nitrogen release from these sources is primarily dependent upon soil temperature or other factors, and not on soil microbial activity. Nitrogen-release mechanisms based upon soil microbes (i.e., methylene urea or MU, urea formaldehyde or UF, and organic sources) for late-season nitrogen applications may not cause the desired fall or winter color response because they do not provide enough available nitrogen for plant use when temperatures are low.

A cost-effective way to implement this program is to randomly test samples from the same area. For example, if you have 500 customers in a 20-mile radius, taking soil tests out of 20 lawns should give you a good indication of which nutrients are needed for customers in that radius. You can then buy fertilizers that meet the turf’s needs without laying down any unneeded nutrients. Soil testing provides innumerable benefits and customers can be assured that your services are customized to their lawns’ needs.

Put It into Practice

With proper timing and nutrient formulation, your customers’ turf can be greatly enhanced by late-fall fertilization. Understanding all of its benefits can help you market to customers and effectively put it into practice, winning more business when your lawns are the first to green up in the spring.

As the agronomics category manager for SiteOne Landscape Supply, Jeff Fesko is responsible for managing the fertilizer, ice melt, and pH and soil testing product lines. He has over 18 years of experience in the green industry and lives in Monclova, Ohio.

Five Landscaping Services to Offer Your Customers This Fall

The changes make regulations for organic fertilizer products consistent with those for synthetic products.
September 23, 2018
Follow Us