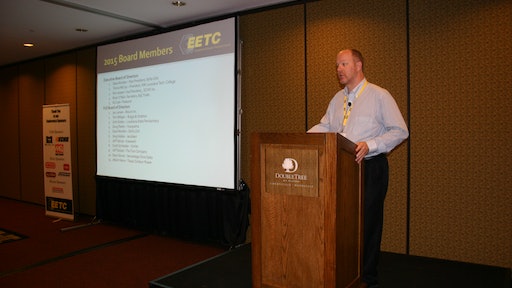 The Equipment & Engine Training Council (EETC) just wrapped up its 19th annual conference in Mundelein, IL. The event, hosted by area manufacturers Echo Inc. and Subaru Industrial Power Products, was attended by roughly 100 of the industry's brightest minds in small engine and power equipment repair—from students and educators to manufacturers, distributors and service technicians themselves.

The EETC is a non-profit association whose goal is to address the shortage of qualified equipment service technicians in the outdoor power equipment industry.

According to the EETC's Erik Sides, this year's conference saw a 25% jump in attendance compared to 2014. "Growth" has been the operative word since Sides took over as executive director in 2013. "We've seen membership growth in just about every segment of our association," Sides points out. For instance, when comparing 2015 to 2014:

Both manufacturer and distributor memberships are also up modestly. Additionally, the EETC has seen a better than 40% increase in certification testing (2014 vs. 2013). These are all signs that the association is headed in the right direction and that interest in small engine repair is not waning—which is a good thing for all key stakeholders in this industry, including manufacturers, dealers, and equipment users such as landscape contractors.

That said, Sides and the EETC Executive Board want to do more. They discussed several new programs and initiatives to further increase awareness of the association, gain new members, and certify and recertify more technicians.

New education and testing materials. Numerous test books have been updated for 2015. These include, among others, two-stroke engines, four-stroke engines, electrical, drivelines and compact diesel.

Additionally, EETC is now helping distribute a host of other educational materials related to small engine and power equipment repair. These include vocational education resources from Briggs & Stratton, American Technical Publishers (ATP) and Goodheart-Willcox. Also, brand new textbooks in electrical and two-stroke engines are under development.

Online education. Through a partnership with a provider of online cloud-based technical education, EETC is ramping up its online education and testing capability. "This is a great alternative to the more traditional textbook format," Sides says.

EETC actually began offering online testing in 2013. Its popularity has steadily grown. Roughly 24% of tests taken in 2014 were online. This partnership will only accelerate growth in this area. George Klein, an instructor at Walla Walla Community College in Walla Walla, WA, says he's quite excited about that—because the ability to access education and testing online has become vital. "My students absolutely love it," he exclaims. "They are all doing their testing online now."

Growing technicians state by state. The EETC Board approved an initiative to appoint "state directors". These would be EETC member volunteers who would serve as liaisons to colleges and high schools, and FFA and SkillsUSA organizations within each state. This kind of grassroots outreach, state by state, is designed to help keep the EETC—and small engine repair in general—in front of both educators and students, while also providing invaluable assistance to educators looking to build up their small engine-related programs.

Scholarship winners announced. Six recipients of the 2015 Paul H. Scholten Memorial Scholarship Program were announced. The program is designed to award individuals pursuing a certificate or degree in power equipment technology at an EETC-accredited school. Winners were:

2016 Conference. Next year's conference will be hosted by Kohler Engines in Kohler, WI, at The American Club Resort. An amazing room rate has been secured, so make plans now to attend. "This will be our 20th annual conference, and we want it to be big," Sides points out.

Tapping the Best in Your Techs