How To Get Your Landscape Crews Out Faster

Six tricks turn the morning circus into a work of art. 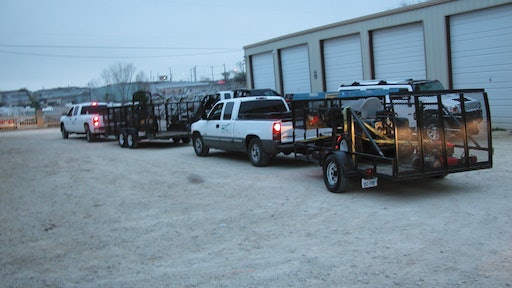 Consider what happens in the morning when all of your employees arrive. People are walking around looking for tools, each other, etc. Nature Works Landscape Design in Walpole, MA, has found that a greeter’s table helps bring some order to the frenzy.

Foremen are seated at the greeter’s table. Cell phones are also distributed there. Employees know that when they report to work in the morning, they head right to the greeter’s table to get their marching orders for the day and hook up with the rest of their crew. It’s a blessing for foremen as well, because they don’t have to wander around the yard looking for their guys.

Pull your managers and crew leaders together to discuss your options before you implement something like a greeter’s table. There is no single way to do it, and you have to do what works best for you and your operation.

Melissa Crayford of Greener Grass Systems in Eau Claire, WI, says, “We do a hybrid greeter’s table. We have our division managers at their desks, which is fine in our case because we have a very open office format. Then, while we don’t have a physical greeter’s table in place, each of our foremen are instructed to greet their crewmembers when they arrive in the morning. They punch in, gather what they need for the day, and head out to their trucks.”

The key is creating awareness and Standard Work so employees know exactly what to do when they report to the shop in the morning, and everything flows logically from there.

For one large Phoenix company employing more than 300 people, having maintenance and installation crews “hand over their keys” to a designated 10-man yard crew every evening has helped boost efficiency. The yard crew inspects trucks and equipment; loads and unloads equipment, tools, materials and waste; performs basic maintenance such as changing oil and sharpening blades, etc. This approach helps crews get on the road faster in the morning because everything is in its place and ready to go when they arrive.

It doesn’t have to be a big yard crew, either, so this approach can also work for much smaller companies. “We’re doing it at Greener Grass Systems, and it works,” Crayford exclaims. “We’ve tried it a couple of different ways. For awhile we had a full-time mechanic who worked at night. That worked great, but we were missing out on some of his other abilities. Now he splits his time as a mechanic and route supervisor. We’ve then brought in a college student to help out with basic equipment maintenance.”

Gas-em-up breakfasts will also disappear when you establish a yard crew. “Guys need to come to work prepared now,” Crayford says. “We put in a 500-gallon bulk fuel tank in our yard, and figure it is saving us $350 a week in lost production time (due to the gas-em-up breakfasts).” The yard crew now fuels trucks and equipment in the evening.

Having crews start at different times can help you get them on the road quicker. This is especially true for companies that are pressed for space and deal with bottlenecks.

One drawback is not having your entire workforce there at the same time, potentially resulting in a loss of camaraderie. “We make an effort to bring the entire company together in other ways so this divide doesn’t happen,” Crayford points out. “For instance, we have a safety breakfast once a month, and a gathering when we recognize our employee of the month.”

Communication is also critical. Convey in writing to division managers and crew leaders when their crews are to report to work in the morning and/or when they are to end the day. It is then their responsibility to communicate this to their crewmembers.

D. Foley Landscape in South Walpole, MA, lights a fire under its crews by posting 2’ x 3’ digital clocks: one in the scheduling area, one in the loading area, and one right by the gate. It’s helped create awareness and establish accountability, since goals are set for departure times.

“Our crews are actually asking for something like this,” Crayford relates. “Now I just have to go out and find some clocks to buy.”

On potential drawback, Crayford points out, is the possibility of creating this sense of being rushed, which can ultimately lead to crews being sloppy or careless. “There’s a big difference between being efficient and being hasty,” she adds. “Part of making this work means crews get out the gate quickly, but also have everything they need to complete their work orders.”

Creating a campaign around the concept of getting crews out by a certain time can be effective. For instance, a battle cry such as “Out the gate by 6:58” creates awareness and gives crews something to rally around.

Incentives for accomplishing the goal bring it all home. For example, “If we’re ‘Out the gate by 7:08’ for 30 days straight, everybody gets $30.” Jim Paluch of JP Horizons says an Ohio company rewarded its employees by taking them to a Cleveland Indians baseball game when it met its goals. The options are endless, so see what resonates with your employees.

“It has to be a total group effort to make something like this work,” Crayford reminds. You always deal with the issue of “is it fair” when a certain crew’s shortcomings can negatively affect another crew(s). “I think you have to keep it fun, and the goal has to be achievable so everyone feels like they really have something to strive for.”

More than a third of landscape contractors say they utilize this tactic—and it is effective. For instance, Crew A doesn’t want to be outdone by Crew B. Posting stats helps make everyone aware of what everyone else is accomplishing.

“You have to be very consistent when reporting stats,” Crayford says. “If you’re doing it weekly, you have to do it weekly, for example. When you’re measuring ‘out the gate’ times, you also want to make sure you’re comparing back to the old data when you first started—so crews can see the progress being made and stay motivated.”