4 Hidden Inefficiencies in a Landscape Company

Getting crews out faster, trailer setup, fueling up, tracking labor. 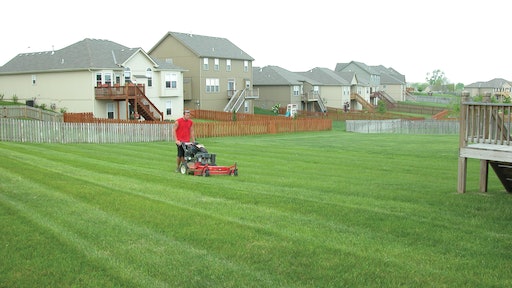 Here's another "hidden inefficiency" in a landscape company: using the wrong mower for the application at hand. Wouldn't a faster, more comfortable zero-turn rider with a larger deck be better-suited here?

The potential for inefficiencies exists in every landscape company. But the bigger you get, the more those inefficiencies compound. Next thing you know it, you're losing thousands and thousands of dollars a year.

Growing landscape companies must become systems-oriented and learn how to work smarter. To get started, you can focus on these four areas where severe profit leaks can often emerge.

1. Getting crews out on time

Consider this: If you have a three-man crew that takes an extra 15 minutes every morning to get out into the field, the crew is wasting 225 minutes a week (3 employees x 15 minutes x 5 days). That's 3.75 hours of wasted, non-billable time every week! Add that up over the course of a season and you're looking at probably $4,000 (if not much more) wasted every year.

Smart landscape companies have found ways to get crews out faster. Consider the following, which is a biggie: Move as much of your morning routine as possible to the previous evening. Sharpening blades, refueling equipment, emptying garbage, loading tools, etc. Your employees want to go home at night, so they'll jump on these tedious tasks with real fervor.

On the topic of getting crews out faster, some contractors have found efficiencies through enclosed trailers. That way they don't have to spend time moving equipment in and out of storage every night.

Cab-over trucks with an enclosed landscape bed in the back, pull-behind enclosed trailers, and the Super Lawn Truck are three widely used approaches by contractors.

An entire crew stopping by the convenience store every morning can be a huge profit drain. Three or four guys running in to get coffee, use the bathroom, buzz through some magazines, etc. can blow 20 minutes in a blink.

Many contractors have invested in on-site fuel tanks so fueling up takes place at the shop. The Super Lawn Truck has an on-board fueling system (see photo). Other alternatives include having crews fuel up in the afternoon on the way back to the shop, or even assigning fueling responsibilities to a single foreman; that way multi-man crews aren't all sitting around at gas stations for the first half hour of every morning.

In landscape contracting, your biggest expense is going to be labor. Controlling labor expense happens on several fronts.

Second, make sure employees are keenly aware that they're being watched. Many contractors have invested in GPS devices for their trucks. That way you can see where the crews have been, when, and for how long.

Third, every so often, get out in the field to observe your crews. Don't spy on them. Rather, let them know you're doing it because you want to help them become more efficient. Efficiency is something everybody in the company should be striving for—from the owners all the way down to the guys running line trimmers.