Kirk’s Lawn Care has grown nearly 600% over the past three years, leveraging technology to drive operational efficiency and improve the customer experience 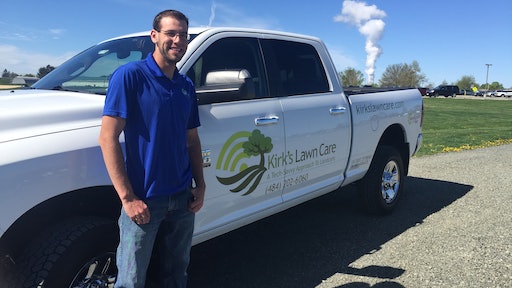 Kirk’s Lawn Care in Limerick, PA, was first featured in Green Industry Pros in the fall of 2013 (greenindustrypros.com/11109112). Even though he was just 22 years old at that time, Kirk Brown was already a veteran lawn service provider, having started his lawnmowing business at age 12. He went full-time in 2010 after finishing high school. In 2013 when the company was featured, Brown was still a solo operation—although he could sense that his company was on the verge of breaking out.

Now nearly four years later, Kirk’s Lawn Care has indeed broke out. After hiring his first employee in 2014, Brown is employing four this season. Sales have grown nearly 600% over the past three years.

As the company has grown dramatically since first being featured, it has also evolved. In many ways, though, it is much the same. For instance, Kirk’s Lawn Care continues to target younger, more tech-savvy, first-time homeowners. However, Brown has broadened his scope a little bit.

“The customer demographic I target is younger to middle-aged property owners,” Brown says. “I find that they are attracted to our brand because many of them would consider themselves as tech-savvy. This demographic makes up the majority of our accounts, although I do have a handful of senior citizen customers and also commercial accounts. I don’t really spend any resources marketing to those customer groups, though.”

Speaking of tech-savvy, Brown has always considered himself and his company to be just that. Back in 2013, he’d even developed a mobile app for his customers to use as an educational resource and to communicate with him. “We have actually ditched the app for simply a mobile-friendly website,” Brown points out.

Technology remains at the core of the company—now in a much more overt way.

“In 2014, I started to notice that many of our customers expressed that they liked some of the technology we were using,” Brown says. “Examples are credit card payment processing, e-mail newsletters and online estimate forms. I even had new customers who chose us because we offered those types of features.

“So heading into 2015, I’d come to realize that it would be best to sell our services on differences other than price,” Brown continues. “This is where I thought technology could come into play. My company had been around for a while and had good name recognition, so I didn’t want to change it. I did, however, decided to change our logo and add the tagline, ‘A tech-savvy approach to landcare’. This remains the best decision I’ve ever made.”

Brown says that when people see the logo and read the tagline, they are intrigued. “I’ve been standing in line at a store and have had people ask me what it means when they read it on my shirt,” Brown relates. “They ask if I have robotic mowers or something. I chuckle and explain that what it really means is that we use technology to be more efficient and provide better customer service.”

Brown says there are a few ways the use of technology benefits his customers. The biggest is convenience, especially when it comes to payment. “We offer credit card and bank transfer payments, as well as an auto-charge option,” Brown points out. “All of our service agreement signing is now done online with electronic signatures. Our online estimate form helps us turn quotes around faster. Our web-based phone system allows us to answer calls and retrieve voicemails anywhere. This all contributes to customer service. Finally, feedback surveys help us gauge what we are good at and what might need a little work.”

Brown has also transformed all of his trucks into mobile offices. His personal truck has a laptop, printer and WiFi. His crews’ trucks have a mounted tablet and mobile hotspot.

“The mount that holds a laptop or tablet is made by a company called Ram Mounts,” Brown explains. “These are the same mounts used in police cars. The mounting base is custom to your vehicle. We use our trucks’ existing passenger seat bolts. No drilling was required and installation was pretty easy.”

The crew trucks use Delphi Connect devices from Verizon that turn the trucks into mobile hotspots. “We use the tablets and computers primarily for clocking in and out, daily job routes and GPS navigation,” Brown says. The employees really seem to like them, too.”

Employees also seem to like two websites Brown has created for internal use. One houses the DOT forms drivers must fill out daily. Another houses things like the employee handbook, a team directory, and materials calculators.

“All of our systems are pretty easy to use,” Brown says. “I have employees who really aren’t great with computers, but get the hang of things pretty quickly after a little bit of training. I actually think our tech-savvy branding excites applicants. Most of our applicants are under the age of 30, so they are used to it and aren’t turned off by our use of technology.”

What does limit Kirk’s Lawn Care’s ability to draw applicants is the fact that the company requires drug testing and background screening for all new hires. That’s OK, though, because Brown wants to maintain a very high standard.

More than just a buzz in the community

Speaking of standards, Brown is quick to point out that he doesn’t think for a second that he knows everything, and is always on the lookout for new ideas and inspiration—often from his peers/competitors.

“I love to meet and network with other local landscape business owners,” Brown says. “This is how I became good friends with Anthony from TDL Landscaping in Spring City, PA, Mark from Todd Quality Landscape Services in Spring City, and Fred from Terra Lawn Care in Collegeville. I reached out to Fred after seeing him in a magazine. Anthony messaged me on Facebook after seeing my trucks around his area. Mark emailed me when he was looking for other landscapers to network with.

“If I want to reach out to someone, I usually ask if they want to grab lunch or a drink,” Brown continues. “I want to get to know them and their company in an informal way. Some offer services that I don’t, and vice versa. So we often refer each other.

“It’s also great to have connections when it comes time to hire employees. I recently had an applicant who worked for another company in the past. It was nice to be able to call that contractor up and ask if I should hire the applicant. We also refer applicants if one of us isn’t hiring but another is.”

Brown adds that he has run into situations where other contractors were not interested in this type of local networking. “Some are really competitive and don’t want you in their area,” Brown points out. “Others just don’t see the value in it.”

Brown does see value in it. He also sees value in remaining highly engaged in the community his company serves. For example, he’d played a pivotal role in helping to construct a local arboretum and environmental education center.

Another thing Kirk’s Lawn Care does is sponsor an annual award at Brown’s alma mater, Owen J. Roberts High School. “We call it the Owen J. Roberts Excellence in Horticulture Award,” Brown says. “The horticulture class there involves formal lessons and education as well as hand-on work. We had a shop where we built things such as Adirondack chairs. There is a floral area for students to create floral arrangements for school functions and weddings. They have a greenhouse and propagation room to allow students to grow all the flowers that will be planted on the school grounds. We also mulched and maintained most of the school grounds.

“As a way of giving back to this amazing program, I started this award last year after getting the school administration’s permission,” Brown continues. “The award is designated for a student who has participated in the horticulture program and has displayed an exemplary attitude and extraordinary skill development. The recipient is chosen by the horticulture class teacher, and receives a $200 check, a personal wall plaque, and his or her name added to the perpetual plaque kept at the school.

“The recipient does not necessarily have to move onto higher education,” Brown adds. “With the award, the recipient receives a letter with me offering my mentorship along with my phone number should they ever have any industry-related questions. I personally present the award each June at the high school’s senior awards ceremony.”