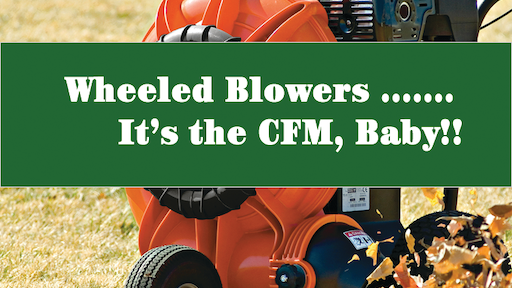 There are four things just about every lawn maintenance contractor can't live without: a mower, trimmer, backpack blower, and tolerance for performing repetitive tasks. Come fall, though, there's one more thing he might wish he had at his disposal: a wheeled blower.

Even though many of today's commercial-grade backpack blowers are extremely powerful, they still don't perform as efficiently as a wheeled blower in more intensive applications; at least that's what manufacturers of wheeled blowers are going to tell you. They might be onto something.

A lot of people become enamored by miles per hour. After all, that tells you how hard the blower is blowing. And if people judge the ferocity of a tornado or hurricane by how hard the storm's winds blow, this must be the logical way to judge the performance of a leaf blower.

To that end, some consumers become easily confused. In reviewing three popular brands of wheeled blowers—Little Wonder, Billy Goat and MacKissic—you can see that the mph ratings vary from around 150 to 200. Now look at a few popular commercial-grade backpack blowers on the market today:

As you can see, these backpack blowers also boast 200-mph wind speeds. But you'll also notice that the cfm ratings (cubic feet per minute) range from around 500 to 900. With a good commercial-grade wheeled blower, the cfm will be more in the range of 1,400 to 2,500 or better.

The cfm measures the amount/volume of air being produced by the blower, as opposed to the speed of that air. Volume is important when you're trying to move large volumes of debris, such as heavy, often wet piles of leaves in the fall.

That's not to say that speed (mph) isn't also important. Pierre Pereira of Billy Goat says a blower's performance is actually a combination of volume (cfm) and velocity (mph) and pressure (psi). When all three of those specs are up to snuff, you have a blower that will likely pack the power to get the job done for you.

Other things that affect performance

Billy Goat actually doesn't publish cfm ratings. Pereira says that's because there isn't an OPEI or ANSI standard for measuring cfm on a wheeled blower. Thus, manufacturers can pretty much measure how they want and say what they want. Billy Goat would rather not engage in this type of tit-for-tat marketing slugfest. Rather, Pereira says they prefer to ask their dealers to conduct side-by-side product comparisons to show contractors how the Billy Goats perform.

As you're shopping for a wheeled leaf blower, that's a smart thing for you to do as well. Look at the key specs of cfm, mph and psi, but also ask your dealer to show you how the blower performs. And ask the dealer what other features the blower incorporates that can increase power and performance.

For instance, what about impeller design? Many blowers have a 17-inch-diameter impeller, which often features six or seven blades. Billy Goat's impeller features 16 blades for increased productivity.

Airflow control is also something to look at. Billy Goat units feature a fingertip-controlled Aim N Shoot feature. Little Wonder blowers feature a patented deflector that splits the air stream. The fastest-moving air is deflected to the base of a leaf pile to get it moving. The upper-level air speed is thus reduced, which helps keep the pile together as you move it.

Another thing you could look at is the discharge chute. Most blowers feature openings in the 3.5- to 6-inch range. Chute positioning is also important. Little Wonder says the chutes on its blowers are just 2 inches from the ground—right where those heavy piles of leaves are that you have to move. That feature helps to further increase productivity of Little Wonder blowers.

For more in wheeled blowers, visit our Product Guide.

Know Before You Blow

Lightest and most user-friendly precision-cutting hand pruner in the ECHO line-up.
ECHO Inc.
May 5, 2020

Mean Green Releases the Stalker (SK-48), the Next Generation of Commercial Mowers

Features such as Eco Idle, the smart feed system and the bottom feed bar sensitivity switch are just some of the features on the control panel making the Vermeer brush chipper easy to operate.
Vermeer Corporation
February 11, 2020

The carbon frame of the blower makes it lightweight, lessening fatigue for the user
Shindaiwa Inc.
December 4, 2019

The WORX WG512 features a patented motor that rotates from a blower to a vacuum with mulching capabilities with the turn of a knob.
Positec USA - Worx
November 26, 2019

The company continues to manufacture products to make work easier for those who work hard
Ryan Whisner
November 26, 2019

The GTA 26 was designed for pruning small trees and shrubs, as well as precise woodworking projects.
STIHL Inc.
November 15, 2019

The BGA 200 is the most powerful handheld blower in the STIHL range.
STIHL Inc.
November 15, 2019