Is the fuel injection a diesel engine's most sensitive system? 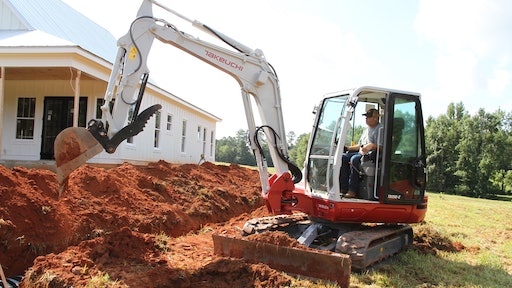 High-pressure common rail fuel (HPCR) systems are standard on nearly every diesel engine today, from heavy equipment to over-the-road trucks, light-duty trucks, large generators and more. HPCR fuel systems have many advantages, but they have also caused confusion among operators. It's all too common for operators to put contaminated fuel into their machines, which has the potential to destroy the fuel system.

To ensure the engine keeps humming for hours to come, it’s important to understand the fuel systems themselves, the advantages and disadvantages, the sensitivities of the systems, the impact contaminated fuel has and warning signs to look for.

Takeuchi equips its machines with one to two fuel filters and a water separator to help remove contaminants and water that can damage sensitive HPCR systems.Because of the design, HPCR systems also deliver better atomization of the fuel upon injection, delivering a cleaner, more powerful and more complete combustion. Engines equipped with HPCR provide cleaner exhaust, deliver more horsepower and fuel efficiency per displacement than previous models.

Some would say the main drawback of HPCR systems is the complexity of the electrical components. There are numerous sensors, wiring harnesses and electrical components that need to be added to ensure the engine performs as it should. Another perceived negative is how sensitive these system can be to contaminated fuel.

Before Tier 4 emissions requirements, non-road diesel engines utilized a mechanical injection system. These systems were not as sensitive to contamination. Because of this, many operators are under the misconception that HPCR fuel systems are also not overly sensitive. In reality, this could not be further from the truth. Dirty or incorrect fuel, water in the fuel and air in the system can all cause damage to newer diesel engines.

The systems are highly susceptible to damage if proper care is not followed. This is because the higher the injection pressure, the tighter the tolerances must be between mating parts in fuel-handling components such as pumps, valves and injectors. Tighter tolerances make these precision surfaces extremely vulnerable to being damaged by almost anything that's not fuel. So, while a certain amount of contamination or water will not cause harm to older-design mechanical injectors, the same fuel will wreak havoc on a common rail fuel system.

For more on the impact of contaminated fuel visit ForConstructionPros.com.