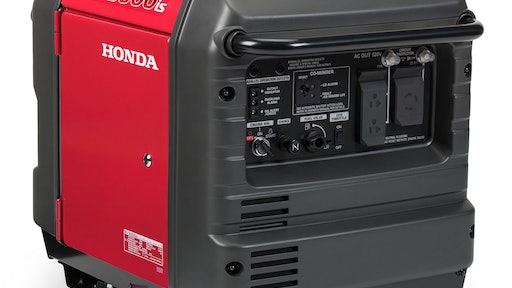 Honda Power Equipment, a business unit of American Honda Motor Co., Inc., is taking a bold step in generator safety by equipping all models in its portable generator lineup with CO-MINDER, a new advanced carbon monoxide (CO) detection system designed to help protect users from injury or death from accidental carbon monoxide poisoning. The Honda CO-MINDER system continuously measures carbon monoxide levels in the air near the generator and automatically shuts down the unit before detected CO reaches a dangerous level. Honda Power Equipment is first in the industry to commit to installing CO detection systems on its full line of generator models.

Millions of customers depend on Honda generators for work, home, and play — tailgating, camping, on-the-job — and for emergency home backup during power outages. Generators must be used outdoors and away from windows and doors to prevent the buildup of carbon monoxide, a colorless, odorless, tasteless, and deadly gas. Even outdoors, if there is no wind, it is possible for CO to accumulate to life-threatening levels in certain locations, such as under the tongue of a fifth wheel recreational vehicle.

Honda Power Equipment will roll out the CO-MINDER technology on existing generator models throughout 2020, starting in July with four models:

By the end of this year, all Honda portable generator models will feature the CO-MINDER carbon monoxide detection system.

Honda designed the CO-MINDER system to be fast-acting, reducing nuisance shutdowns from false positives. Slower CO sensing systems must respond to dangers at a lower CO concentration in order to react in time to shut down the generator. Lower, temporary concentrations of CO can occur in certain conditions, such as when a gust of wind blows exhaust back toward the sensor, creating a false positive, a shutdown, and an inconvenience to the user. Honda CO-MINDER is an improvement over those systems.

The Honda CO-MINDER carbon monoxide detection system is built with a comprehensive range of safety features. The system is not intended to be overridden or tampered with, and the sensors are designed to work even if they are accidentally blocked. The sensors, with the widest temperature operating range of any existing CO monitors for generators, match the design running temperatures of Honda generators, allowing for use anywhere in the U.S. Both moisture and dust resistant, the sensors are designed for years of use. Further, the generator sensor system automatically tests itself and is equipped with a built-in warning, alerting the user to replace the sensors prior to end of life. Finally, the sensors conform to the American National Standards Institute (ANSI) PGMA G300-2018 quality standard established for carbon monoxide monitors for generators.

“At Honda, 'Safety for Everyone' is our commitment to incorporate industry-leading safety features into all of our product lines, whether outdoor power equipment, cars, motorcycles, or jets,” says Will Walton, vice president of Honda Power Equipment. “Our CO-MINDER carbon monoxide detection system is designed to help ensure that everyone who operates a Honda generator can do so with increased confidence, providing users, friends, and families with reliable, portable power and peace-of-mind protection.”

Labels on the Honda generator models equipped with the CO-MINDER carbon monoxide detection system contain additional safety information, such as an exhaust directional safety warning decal, an anti-tamper message, and information on restarting the generator after an automatic CO-related shutdown.

In addition, a portable generator should never be plugged into a standard outlet. A safe connection starts with a transfer switch installed by a licensed electrician. The switch cuts off the utility power while the generator operates, and powers only selected circuits. When utility power is restored, the user disconnects the generator from the transfer switch so that power is not fed back to the utility power source (thereby preventing injury to a utility worker). The Honda generator line offers a range of wattages and other innovative features, including inverter technology that provides clean, stable power, protecting against damaging power surges, large fuel tanks, full frame protection, and electric starters.

“As a leader in the portable generator industry, Honda Power Equipment has been highly supportive in the safety standards adopted by ANSI/PGMA G300-2018. In 2020, we are proud to be the industry’s first manufacturer to commit to installing CO detection devices on 100 percent of our portable generators,” added Walton. “CO-MINDER technology exemplifies Honda’s corporate commitment to providing industry-leading products and safety features for all.”

The Honda EU1000i is the perfect solution for scenarios where basic power and ultra-light weight are required. Weighing in at 28.7 pounds, the EU1000i can easily be  carried and conveniently stored (but not operated) in small recreational vehicle compartments. The unit also features a two-tiered noise dampening system that reduces noise to 50 dB(A)—quieter than normal speech, which is approximately 60 dB(A)—at rated load and can run 3.0 to 6.8 hours on a single tank of fuel, depending on the load.

The Honda EU3000iS model is one of the smallest, quietest generators capable of starting and running most modern 13,500 BTU rooftop recreational vehicle (RV) air conditioners and other RV appliances. Equipped with a large 3.4-gallon fuel tank and electric-start capability, this model also doubles as a home backup unit to power a furnace, refrigerator, microwave, TV, hair dryer, or several lights. The unit can run from 6.9 to 19.6 hours on a single tank, depending on the load, making it the ideal choice for overnight power at a remote location.

The EG4000, powered by the Honda GX270 engine, boasts a 6.3-gallon fuel tank, a long run time up to 14.8 hours at 50 percent load, and a sound level of 67 dB(A). The model also incorporates GFCI-protected 120-volt 20 ampere duplex receptacles that meet National Electric Code (NEC) home connection guidelines, features additional outlets for convenient use, and is designed with a tough, one-piece welded frame. Like all Honda generators, the EG4000 is equipped with circuit protectors for the operator and equipment and USDA-qualified spark arrestor/mufflers for fire prevention.

The Honda EG4000 incorporates a number of advanced design features, including Digital Automatic Voltage Regulator (DAVR) technology for consistent stable power. The DAVR holds the voltage stable within one percent over time during standard operation and has a built-in self-diagnosis function to prevent engine speed from exceeding 4,140 rpm for longer than three seconds in varying load conditions. In addition, the DAVR adjustments are driven off the main winding, as compared to a sensor winding in conventional AVR systems.

The EB10000 is the most powerful Honda generator and the company’s flagship model. With a maximum output of 10,000 watts, the rugged Honda Industrial Series EB10000 generator is portable and features a narrow-shaped design, a centralized exhaust mechanism, a newly developed alternator, and the best fuel efficiency and lowest noise in its class. The model is well suited for commercial applications, including construction-related job site work, as well as the rental market, where users demand the most reliable power for a variety of applications. The EB10000 is powered by the Honda GX630 V-Twin Engine, one that offers customers more power, adaptability, greater fuel economy and reduced emissions in a more compact package.

These four Honda generator models, equipped with the CO-MINDER carbon monoxide detection system, are available in July 2020. Honda Power Equipment will roll out the CO-MINDER™ technology on the balance of its product line throughout the remainder of 2020.