Dixie Chopper Marches Back into GIE+EXPO

The company has continued to increase business and announced exciting branding partnerships. 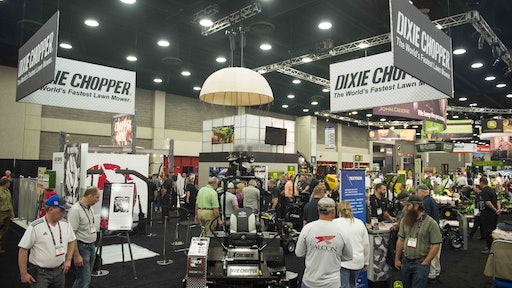 At a GIE+EXPO 2015 press conference, Dixie Chopper announced their lineup of new mowers and re-branding efforts. The Dixie Chopper booth spotlighted the return of the company’s military themed campaign, “Chopper Army”. Both the indoor and outdoor spaces were military themed, including a real World War II tank, and armored vehicle, a mower parachuting from the ceiling and a rescued bald eagle—Aquila.

“We introduced Chopper Army last year at the GIE+EXPO with much fanfare and an overwhelmingly positive response from attendees,” said Chris Vernon, vice president and general manager of Dixie Chopper. “But Chopper Army is about much more than just tanks and camo. Dixie Chopper has expanded its product portfolio, hired additional staff and increased our coverage in the market. As a result, we’ve seen significant increases in sales, segment share, brand awareness and dealer confidence.”

Vernon says that he’s amazed to see how the brand has continued to grow. While Vernon says they may have been unsure where the brand was headed last year, but now he says they’ve seen considerable growth. According to Vernon, Dixie Chopper has improved their products, added additional mowers to the warranty list and worked to strengthen dealer relations.

At the show, Dixie Chopper introduced its new 2016 product line-up. The company says that it added several new models to its “tried and true” Silver Eagle zero-turn series. The new 72-inch Elite X deck with X-blade technology is now available on the Silver Eagle. With Kawasaki FX and fuel-efficient Kohler EFI engine options, the Silver Eagle can cut up to 6.4 acres per hour to power through the toughest jobs with ease.

There were also cosmetic changes added to the existing zero-turn, walk-behind and stand-on mower models. The mower decks are now created from stainless steel and the color of the mowing deck went from grey to black.

Dixie Chopper also played center stage for the GIE+EXPO nightlife, sponsoring rock legends Grand Funk Railroad on Wednesday night. Dixie Chopper brand ambassadors were on hand during the concert to blast out t-shirts and interact with attendees next to another full-size World War II tank.

In time to mark the one-year anniversary of the re-branding effort, Dixie Chopper also announced its exclusive sponsorship with celebrity Willie Robertson of Duck Commander. Vernon says that they delivered custom-made duck commander models for Robertson to use. According to Dixie Chopper, Robertson was already a Dixie Chopper enthusiast, so teaming up with Duck Commander was the perfect fit to target the outdoor enthusiast.

Vernon says that Dixie Chopper has progressive plans as a company to continue their growth. One aspect of that plan is to add more dealers for the brand to fill in gaps in the market.

“Dixie Chopper had another successful and exciting year at the GIE+EXPO with the Chopper Army theme, the reveal of our 2016 product line-up, and our new sponsorship with Willie Robertson and Duck Commander,” Vernon said. “The booth traffic and customer engagement exceeded our expectations and we cannot wait to see what 2016 will hold for Dixie Chopper.”

Getting its Chops Back

Connecting users to their Husqvarna power equipment and providing immediate access to information about their tools
Husqvarna
June 29, 2020
Follow Us