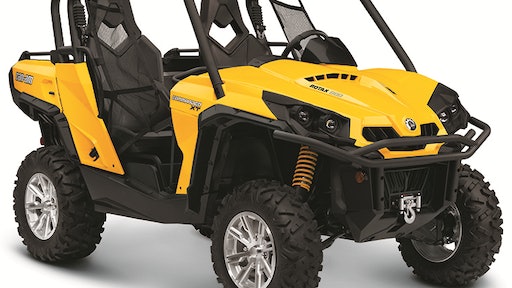 A couple of years ago, when the utility vehicle industry really started to rev up, OPEI president and CEO Kris Kiser warned that the Consumer Products Safety Commission (CPSC) would be looking to establish enhanced safety criteria. Then, earlier this year, Kiser told Green Industry Pros, ”Some UTVs are looking really muscular, almost like trucks. At some point they are going to get a hard look from regulators. The CPSC is already saying today's UTVs are faster and represent a rapidly growing product segment. That will naturally lead to enhanced regulatory visibility."

Perhaps coincidence, perhaps not, the months of April and May brought a flurry of utility vehicle recalls by the CPSC.

KUBOTA – Recall affects roughly 23,400 model year 2013, 2014 and 2015 Kubota RTV400 and RTV500 series gas-powered utility vehicles. The steering shaft can break and cause the operator to lose control of the vehicle, posing an injury hazard due to risk of collision. Kubota has received nine reports of shafts breaking, including one in which a consumer lost control of the vehicle and collided with a barbed wire fence, resulting in a cut on the arm. The units were manufactured in the U.S. and sold by authorized Kubota dealers nationwide from 2010 to 2015 for between $21,000 and $22,000. Consumers should immediately stop using the recalled utility vehicles and contact an authorized Kubota dealer for a free inspection and free repair.

HONDA – Recall affects roughly 3,300 model year 2016 Honda Pioneer 1000 side-by-side recreational off-highway vehicles. The front door can open unexpectedly while the vehicle is in use, posing a risk of injury to occupants. Honda has received one report of an unexpected door-release incident during a dealer set-up of the vehicle. No injuries have been reported. The units were manufactured in the U.S. and sold by authorized Honda Powersports dealers nationwide from February 2016 through April 2016 for between $14,000 and $17,200. Consumers should immediately stop using the recalled vehicles and contact their local authorized Honda dealer to schedule an appointment to have the original front door striker plates removed and replaced, free of charge.

CUB CADET – Recall affects roughly 1,300 model year 2015 Cub Cadet Challenger CX500 and Challenger CX700 four-wheel drive off-road utility vehicles. The parking brake cable can fail, posing a crash hazard. Cub Cadet has received 22 reports of incidents of the brake cable failing. There have been no reports of injuries or property damage. The units were sold by Cub Cadet dealers nationwide from April 2015 through October 2015 for between $8,500 to $9,500. Consumers should immediately stop using the recalled vehicles and contact a Cub Cadet dealer to schedule an appointment for a free repair. Cub Cadet is contacting owners of the recalled utility vehicles directly.

BRP (pictured) – Recall affects roughly 10,600 model year 2013 Can-Am Commander side-by-side vehicles equipped with Dynamic Power Steering (DPS). The steering coupling can strip on the rack and pinion assembly and result in a loss of steering control and crash hazard. The firm has received 29 incident reports, including two reports of minor injuries. The units were manufactured in Mexico and sold at Can-Am dealers nationwide from April 2012 through April 2016 for between $12,600 and $20,100.

Consumers should immediately stop using the recalled vehicles and contact BRP Can-Am side-by-side dealer to schedule an appointment for a vehicle inspection and free repair. The free repair will be available on June 30, 2016. In the meantime, consumers who must use their vehicles can contact BRP Can-Am side-by-side dealer and make an appointment to have their vehicles verified. This free verification is a temporary action to allow limited use of the vehicles until the availability of the free repair. BRP is notifying registered consumers directly about this recall.

POLARIS – Recall affects roughly 133,000 Polaris Model Year 2013-2016 RZR 900 and RZR 1000 recreational off-highway vehicles (ROVs). CPSC and Polaris warn consumers to stop using these recreational vehicles immediately and contact their Polaris dealer for a free repair. Polaris has agreed to voluntarily suspend sale of all recalled vehicles until they are repaired.

Polaris has received more than 160 reports of fires with the recalled RZR ROVs, resulting in one death of a 15 year old passenger from a rollover that resulted in a fire and 19 reports of injuries, including first, second and third degree burns. The recalled ROVs can catch fire while consumers are driving, posing fire and burn hazards to drivers and passengers.

The ROVs were sold at Polaris dealers nationwide from July 2012 through April 2016 for between $16,000 and $26,000. The ROVs were manufactured in the United States and Mexico and imported and distributed by Polaris.

YAMAHA – Recall affects roughly 7,000 model year 2016 YXZ1000R and YXZ1000R SE Side-by-Side utility vehicles sold in four colors: orange and black, blue and white, silver and red, and yellow and white. Water can get into the throttle cable and if it freezes during cold weather, the ice can prevent the throttle from returning to idle. This can cause the rider to lose control, posing crash and injury hazards. No incidents have been reported. The units were manufactured in the U.S. and sold at Yamaha side-by-side dealers nationwide from September 2015 to February 2016 for between $19,800 and $21,600. Consumers should immediately stop using the recalled utility vehicles and contact their local Yamaha dealer to schedule a free repair. Yamaha is contacting all registered owners directly.