There are a number of factors that can help future-focused snow removal contractors lengthen blade life—from blade choice to preventive maintenance to operator training. 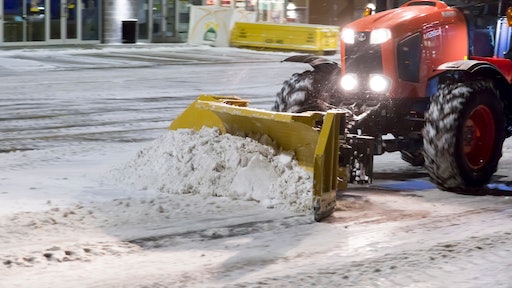 Be sure to use the appropriate down pressure and speed. Excessive down pressure can quickly wear out cutting edges and, when paired with faster speeds, can cause significant blade damage when hitting an obstacle hidden under the snow.

It’s not that hard to walk into a dealership, take a look around and pick out one of the least expensive snow blades. It’s new. It’s made to move snow. And the price seems reasonable.

It’s harder to know if that shiny good deal is going to pay off in the long run. Sure, it may get a new contractor into the snow removal business or add to a contractor’s existing fleet—and it’d likely do a good job to begin with. But how long is it going to last before another bargain blade needs to be purchased? And how much downtime might there be if its components aren’t made for the rigors of the elements?

While there’s no easy answer, there are a number of factors that can help future-focused snow removal contractors lengthen blade life. From blade choice to preventive maintenance to operator training, it all helps extend a blade’s lifespan and, as a result, provide a better return on investment.

It all begins with matching the plow to the carrier. While it may be tempting for contractors who just bought a new carrier to save money by using a blade already in their fleet, they could be putting efficiency and longevity at risk. Using a bigger carrier than recommended for a blade can cause stress fractures and cracks in the blade, significantly shortening its life. Meanwhile, using a carrier that’s not big enough for the blade doesn’t maximize the blade’s potential.

Beyond finding the right match, some blade features and components are simply better engineered and built to withstand harsh day-to-day conditions, and last longer than others. Choosing a new or even used blade with such features can lead to years of use with little downtime.

Carbide edges are a prime example. While they cost about four times more than steel edges, they can last as much as seven times longer, which means fewer replacements and, in turn, less downtime. A contractor can go through two sets of steel edges in a season, whereas a carbide edge can last more than three seasons. That’s a half-dozen fewer stints of downtime to replace the edges, coupled with 43 percent savings over those seasons in product cost.

That savings multiplies when compared to rubber or polyurethane edges. These softer materials may fare OK on smaller, lighter-duty blades and are even required for some applications, such as airport runway jobs, but for clearing large parking lots or roadways, they are impractical. Rubber and polyurethane wear faster than steel and much faster than carbide, even when lubricated in wet conditions. In cold, dry areas, rubber gets brittle and wears down even faster over dry pavement.

When it comes to cutting edges, carbide isn’t the only feature that contributes to longer wear life. Reversible edges that can easily be flipped and replaced double edges’ useful life as well.

The material type matters beyond the cutting edges, too. The thicker the blade’s steel, the heavier duty it is, but there’s a caveat: More steel means more weight, and thus more strain on the carrier or the need for a larger carrier. Some manufacturers combat this by using steel that offers the right balance between steel gauge, weight and abrasion resistance. Choose blades with cutting edges that are made with steel that has abrasion-resistant properties of AR400 or better. This ensures a long wear life without a significant weight increase. Blades that incorporate steel tube frames also better resist flexing, helping the blade last even longer.

Threats to a blade’s wear life also lurk beneath the snow, as it’s inevitable the blade is going to hit something hidden below. While best known for improving productivity, segmented blades that trip over obstacles lessen damage. To get the longest life from these trip edges, look for a model that connects the panels with parallel steel linkages rather than polyurethane block systems. Parallel systems keep the moldboard properly aligned during use, eliminating the risk of damage when piling and stacking snow.

Hydraulic systems also can make or break—literally—a good return on investment. The simpler the hydraulic system, the less it should cost to maintain, and the longer it should last since there are fewer cylinders and pins to wear or break, and need replacement over the life of the blade.

Maintaining for the Future

Besides hydraulic system simplicity, regular visual inspections of the system go a long way in getting the best life out of a snow blade. Check the hydraulic lines and linkages daily, looking for wear, cracks and loose connections. Sure, it’s probably not feasible or even the first thing on an operator’s mind when heading out at 2 a.m., but it should at least be done at the end of a shift.

If a hydraulic line does come loose, it can get caught in the carrier, or pinched or cut by the blade. What could have been a minute spent checking and tightening the line becomes a more time-intensive process to repair or replace the line. Not only is that downtime unnecessary and undesirable, but Murphy’s law predicts it’s going to happen in the middle of a big snowstorm. Even less dramatic damage, such as cracks in hydraulic hoses, can lead to significant downtime if left unchecked since hose chafing causes leaks and leaks cause component failure.

Maintaining a regular schedule of greasing a blade’s moving parts also adds to the product’s life. Check the owner’s manual for recommended grease points and set a schedule so it’s not forgotten. Be sure to choose grease with an adequate cold rating, as well as strong moisture-repellent qualities. It’s common knowledge that snow melts and, if that water gets into areas lacking lubrication, it can seize a blade’s moving parts. If components lock up, maintenance time increases exponentially.

While it’s important to keep moving parts moving, it’s just as essential to keep stationary parts stationary. Regularly check a blade’s parts and fasteners, ensuring they’re tight and in place. Pay special attention to bolts along a blade’s cutting edge. Blade operation causes vibration and stress, which can loosen bolts. If a loose bolt isn’t spotted and tightened, it may shear off when going over a manhole cover or other obstacle, requiring the operator to stop and make repairs.

For the best blade life, annual maintenance checks—whether at the beginning or end of the season—should be done. Before storing a blade for the summer or taking it out in the fall, thoroughly clean the equipment. Once cleaned, it is easier to spot issues, from loose parts to cracks. Tighten parts when feasible and replace others when needed. Whether completely worn or not, some parts benefit from annual replacements and changing them can ensure greater uptime during the peak snow removal season. Swap out skid shoes annually, for example, and replace the cutting edge if needed. Using original equipment manufacturer (OEM) parts and keeping backups handy not only increases uptime, but also lessens the risk of using a less-than-optimal replacement in a time pinch and ending up with damage.

When inspecting the cleaned blade, look for areas where the paint is scratched or worn. Use custom-matched spray paint from a manufacturer or dealer to cover any damage. While this goes a long way in terms of resale value, it also helps prevent rust, prolonging blade life.

The Drive toward Longevity

Getting the most use from a blade isn’t just in the selection and upkeep. Correct operation also has an impact.

Intuitively, the faster something goes, the quicker the task is going to be accomplished. That’s not the case with snow removal, though. Rather than finishing the job faster, excessive speed often results in blade damage. Similarly, strong down pressure may seem to be the best way to scrape a road right to the surface, but that, too, can backfire. Excess pressure causes premature wear, especially on cutting edges. Plus, the combination of too much down pressure and speed can cause damage since something is inevitably going to be hidden under the snow and, when hit with extra speed and pressure, be more likely to damage the blade.

Operators also should avoid angling the snow blade forward. While doing this can occasionally clean the surface better, long-term use can be detrimental. Manufacturers design blades to be used perpendicularly to the ground, so tipping the top forward can wear cutting edges and blade wings faster than if used properly.

When longevity is needed, customer support is key. Plus, the more experience a manufacturer brings to the design and engineering process, the more likely its products are going to withstand long-term use.

Additionally, a manufacturer that backs its products with a favorable warranty is more confident in how they’re going to hold up. Look for a product that is going to be supported at least through its first couple of years. That way, if something goes wrong, there’s no stress in getting a fast replacement. More often than not, though, the longer the warranty, the less worry there is going to be of a breakdown.

When it comes to making a snow blade last, there’s more to consider than purchase price. From the buying process to day-to-day use, the right choices and actions add up to a blade ready to go the distance season after season.

Ryan Frey is the general manager of Horst Welding. Horst Welding has been manufacturing equipment solutions for the snow removal and agricultural markets for more than 20 years. Its HLA brand of snow removal equipment is one of the most extensive on the market. For more information, please visit www.greenindustrypros.com/10155831.