Owner Patrick McKennon of Turf Care Landscapes in Nashville, TN, made the decision to expand his landscaping company by adding Mosquito Squad. 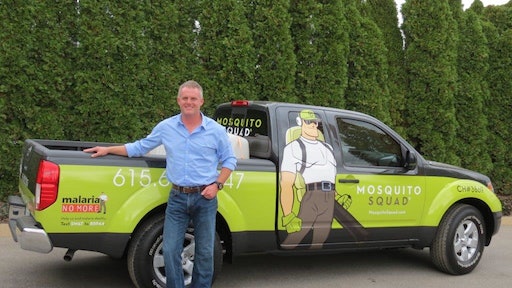 A longtime landscaper, Patrick McKennon who owns Turf Care Landscapes in Nashville, TN has been working on lawns since a very early age.

“I was 12 years old and my dad bought a push mower and a weed eater and made me pay him back and I started mowing the yard. He paid me 50% of what he was paying the previous provider. I always joke and say it was like painting the Golden Gate Bridge; I would start in the front yard and work my way to the side and the back, and by the time I came back around the other side I would have to start over again. So it never ended. However being in 7th or 8th grade it was handy to have $60 or $100 in your pocket. So that’s how I started.”

Out of college he started his company and has been the owner and operator for 32 years. In 2004 he started looking to expand his service offerings, by providing mosquito misting systems. He founded the company Nosquito, but when the market crashed in 2008 McKennon was faced with a decision, there weren’t many customers that were interested in installing the luxury misting systems. The systems were around $2,000 to $4,000 to install and then customers needed to refill their system yearly so he found that only one out of every four quotes actually closed. He began looking into franchising and made the decision to add Mosquito Squad to his company.

“I did my research and found out that they were very reputable, and I felt like it was a golden opportunity. I had to give up my name as Nosquito and succumb to the franchise organization, which was a totally new adventure for me. I feel like it’s helped my landscape and lawn care business because there’s systems in place and there are systems to follow,” says McKennon. “So it was a great addition, I’m able to cross market and it’s just a great add-on to what I’m doing. I’m already outside and I’m already planting tree and shrubs, and people are spending $20,000 to $100,000 on landscapes, but they’re not able to go out there and enjoy it because they’re imprisoned by mosquitoes, chiggers and ticks. So us having misting systems as well as barrier sprays, we’ve been able to allow people to go back outside and enjoy it.”

The Mosquito Squad franchise offers a wider variety of services, which means that McKennon has been able to reach a larger customer base. He added “three dimensions” which include lower-priced barrier sprays, the more luxury misting systems and special event sprays that they do at weddings and other outdoor events.

Mosquito Squad also offers a dependable support system for their franchise owners. They provide any sort of marketing items including door hangers, business cards and advertisements. Mosquito Squad is also constantly in contact to answer questions or provide support. McKennon is on the board as well, so on top of the yearly system meetings, he takes part in four to six phone meetings a year where they go over what challenges the brand is facing and what opportunities they have to expand.

This week, June 21 – 27, is Mosquito Control Awareness Week, launched by the American Mosquito Control Association. The goal of the week is to educate the public on the significance of mosquitoes and the importance of mosquito control service workers. McKennon and his company work to empower their customers and provide further information on the importance of natural factors that may increase the amount of mosquitoes in their yards. They want customers to understand the additional social responsibility of steps to keep their yard mosquito free.

“As much as we can come out and spray there’s also a responsibility that everyone can do themselves. It’s as simple as keeping the grass cut, keeping leaves out of beds, making sure there’s no ponding of water in yards – whether it’s irrigation or whether it’s corrugated pipes connected to your downspouts – water needs to be taken away.”

Seven Tips to Protect Lawns from Pests and Plant Diseases