The competition honors the best in brick design across North America. More than 150 projects were entered into the competition and reviewed by an independent panel of judges. The projects in which Pine Hall Brick Company products were chosen were diverse both in location and in subject matter. The awards came for installations that are in Indiana, Virginia, Kentucky and New Jersey. The projects included a fire station, city plaza, park and a street.

“Each of these projects benefits, in its own way, from a product that is environmentally sound,” said Walt Steele, paver business manager for Pine Hall Brick Company. “Clay bricks and pavers are made of readily available materials—clay and water. They last virtually forever and they have an aesthetic quality that is unmatched.”

The BIA said that the Best In Class winners will receive a plaque commemorating the 2014 Brick in Architecture Awards. They will also be featured in the December 2014 issue of Brick in Architecture, which will be included as an insert in a forthcoming issue of Architect Magazine. Gold, Silver, and Bronze winners will be listed there as well and will receive a certificate of achievement for their accomplishments. 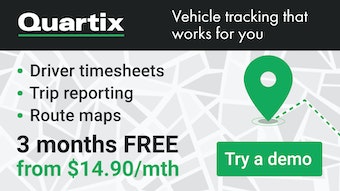 Sort your vehicle tracking with Quartix. || Save on fuel and maintenance, increase productivity, and protect your team. || Speak to our team to find out more.
October 1, 2020
Latest

Sort your vehicle tracking with Quartix. || Save on fuel and maintenance, increase productivity, and protect your team. || Speak to our team to find out more.
October 1, 2020

Michigan Landscaper Urges Others to Stay At Home

Our social campaign, #StrengthofIndustries aims to highlight efforts to support the landscaping industry regarding COVID-19
April 7, 2020

Toro launches a new easy-to-use attachment that is available for over 5 Dingo models.
The Toro Company
February 18, 2020
Follow Us