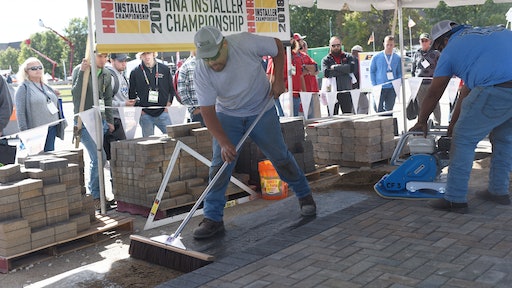 The first of seven regional championships leading up to the final 2019 Hardscape North America Installer Championship have begun, and competitions will continue through August.

The regional championships were launched in 2016 and have been so successful that they have expanded to include seven locations around the country. Regional winners will have the opportunity to compete for the title of HNA Champion later this year.

The Installer Championship finals will take place at Hardscape North America (HNA), October 16-18 in Louisville, KY. Hardscape North America will provide the seven winning teams (of two people each and an alternate or coach) from the regional championships roundtrip transportation to Louisville, KY, individual accommodations at a downtown Louisville hotel (Wednesday-Friday), complimentary trade show admission to HNA and complimentary registration for the HNA Installer Championship. The total prize package is valued at up to $3,500 per team.

The Hardscape North America Installer Championships are intended to test and recognize the skill, dedication and passion of hardscape contractors from Canada, the United States and Mexico.

Teams may participate in the Hardscape North America Installer Championship in Louisville, KY without competing in a regional championship, if space is available. Registration opens in May and the fee is $150 per team before the early bird date of September 6, 2019, or $200 after.  After the conclusion of the trade show, each team who competes will be refunded $150 of their registration fee.

For further information about registering for a regional championship, please contact Robert Bowers at rbowers@icpi.org or visit www.hardscapena.com/attendee/features/installer-champ.

This 17 class machine extends CES’s battery/electric line, joining the popular 9VXB which is already on the market.
KATO - CES
April 24, 2020
Follow Us