Networking and new lighting and irrigation technologies have helped Ken Hennebert quickly establish his third landscape company in as many states. 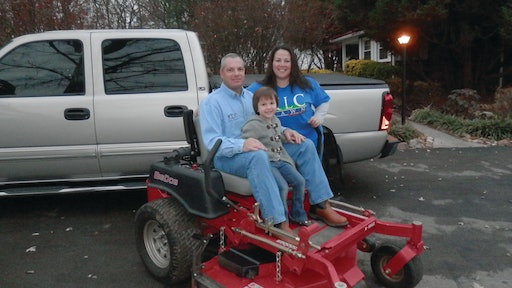 Ken Hennebert has run three different landscape companies in three different states over the course of his 18-year Green Industry career. He’s employed as many as nine and as few as zero. Whether flying solo or fielding a few crews, Hennebert says there is no substitute for networking if you want to grow sales.

Today Hennebert is primarily flying solo, though he does hire a part-timer during peak season. His company, KLC Lawn & Landscape in Maryville, TN, was started just a couple of years ago. “It was very scary and intimidating because the economy was really in the tank,” Hennebert says. “Fortunately, I got a lot of help from friends in the Green Industry. And I must say, no small business is ever successful without the support of family.”

Working with your peers

While 40% of Hennebert’s revenue comes from lawn maintenance, he says his specialties are irrigation upgrades and LED lighting. “Many of my colleagues are 100% maintenance,” Hennebert adds. “We all decided that it made sense to work together to build up our network of customers.”

Hennebert and his five "partners" have also collaborated on direct marketing campaigns. “Most recently we did a high-quality mailer through Vistaprint,” Hennebert relates. “We produced around 2,500 cards.” The cards were not mailed, though. “We did a lot of internet research to identify households with higher median incomes. We also identified certain neighborhoods which we knew were in our target market. From there we hand delivered the cards like newspaper boys. It was time-consuming, but really paid off.”

Leads come in, but then what?

This direct mail campaign generated nearly a 10% response, Hennebert says. Many marketing experts say 2-3% is the norm. Needless to say, the campaign was a success. The challenge now was following up on the leads—not always an easy task when you’re a one-man show.

The mailers gave homeowners two options: 1) a phone number to call, 2) a website to visit to fill out a form. Just about everybody used the phone number, which happened to be Hennebert’s cell phone. “If it rang and I wasn’t operating equipment, I answered it,” Hennebert relates. “Few people are of the nature that they’ll keep calling me. After a couple of tries they will call a different contractor. If I can’t answer and they leave me a message, I call them back that same day.”

Now that Hennebert has built up a solid base of business, he’s looking to establish a more formal process of generating testimonials and referrals to help keep the stream of new leads flowing. “We’ve always just taken them as we got them,” he tells. “Now we want to be more proactive about it. I’m thinking about offering discounts to customers who provide us with a testimonial or referral.”

That all remains a work in progress, Hennebert cautions. So does the process of building relationships with clients, which he says will always remain his focal point. “I ask for the client’s input and what they envision,” Hennebert says. “Then I add my own ideas to get to the finished project. I think it’s so important for any type of contractor to understand that they must build a unique relationship with each customer. For example, many of your residential customers might be older and can’t get around as easily. Doing simple things, like getting the mail and bringing in the trash can from the road, can go a long way. Sincerity matters, too.”

As pointed out earlier, 40% of Hennebert’s revenue comes from lawn maintenance. But his specialties are irrigation upgrades and LED lighting. He says he’s carving out a niche for himself by utilizing the latest in product technology.

With respect to irrigation, Hennebert is talking about things like rain sensors and smart controllers. “We also perform system surveys in the spring and implement things like improved rotors and nozzles,” he adds. “It’s also simple things like the correct placement of heads.”

Many of the new products themselves are pretty easy to use, according to Hennebert. “You have to hand it to the manufacturers like Hunter and Irritrol,” he says. “They’re very helpful, and tech support is great. But regardless, most of these new irrigation products are pretty simple to use.”

Selling the new technologies gets a little more complex, Hennebert relates. Many of his homeowner clients pump their water out of a nearby lake. So they are not as receptive to the concept of upgrading their irrigation system to conserve water. However, those clients tied into city water are growing more receptive all the time. “I try to be proactive with these accounts,” Hennebert says. “If I see a problem on a property, I give them a list of options. If it looks like it will be a larger investment, I calculate a return-on-investment for them so they see the longer-term benefit and payback.”

Most of Hennebert’s incoming calls are for irrigation system repairs—which ultimately lead to upgrades in many instances. He is also receiving more calls for LED landscape lighting.

“Typically it’s a homeowner that doesn’t have any outdoor lighting, but wants it and knows LED is the future,” Hennebert says. “Additionally, we’ve had customers who switched over from halogen lighting and got their money back in a year or two (from energy savings).”

Unlike some of the new irrigation technologies, Hennebert says LED lighting is a little tougher to grasp. But thanks to educational outreach by suppliers like Vista Outdoor Lighting, he’s well on his way. “I won’t install anything but LED lighting anymore,” he relates. “It’s energy-efficient and virtually maintenance-free—if installed properly.” Fortunately, LED lighting—in addition to irrigation system upgrades—happen to be Hennebert’s specialty.

Owner/operator of KLC Lawn & Landscape in Maryville, TN. Company was founded in Barnesville, OH, in 1994. In 2006 Ken moved to Savannah, GA, where he went to work for the airport as a landscape technician while also starting another lawn maintenance company. Then, in 2010, Ken moved to Tennessee to be closer to his aging parents. There he’s quickly established his third landscape company.

Matching furniture sets, rustic farmhouse fall out of favor this summer, according to new Zillow research
May 28, 2019

The High-End Look You Want with the Durability You Need

Changing landscaping trends can be hard to keep up with. Here are a few to look out for this year.
May 2, 2018

Registration is open for the 2018 GIE+EXPO, on track to be bigger then last year's record-breaking event.
April 23, 2018

Landscaping Projects Make Backyards the Life of the Party

The Biggest Outdoor Design Trends of 2018—So Far

Whether it be for meditating, entertaining or living, a homeowner's yard aligns with their interests.
Jamie Birdwell-Branson
April 4, 2018

The Husker Lawn and Leisure Show is celebrating 16 years of production for landscaping and design professionals.
Klair Acton
March 21, 2018

Experiential and Eco-Friendly: The Top Five Landscape Trends of 2018

The National Association of Landscape Professionals announced its official list of the top landscape trends of 2018.
January 25, 2018

By donating 50 percent of all profits from Labor Day weekend, DEKOR hopes to lend a helping hand to Houston.
September 5, 2017

Thousands of Pinpoints of Light Outdoors

The BlissBulb from BlissLights works like a regular light bulb to create thousands of pinpoints of light outdoors.
BlissLights, Inc.
August 17, 2017

This national burial ground is the final resting spot for over 400,000 military service men and women, and their spouses.
July 20, 2017
Follow Us