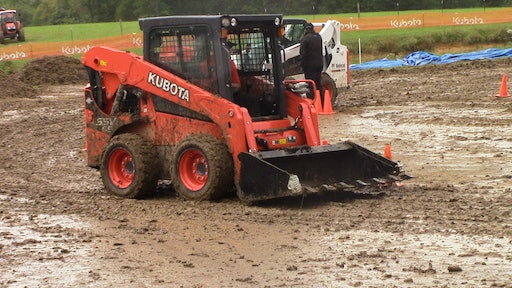 Kubota has introduced its first-ever skid-steer loaders this year.

Landscape contractors use skid-steer loaders for a lot of different tasks—from hauling and loading to powering all kinds of attachments. That's why leading manufacturers have been striving to introduce new machines that offer a blend of power and speed, comfort and agility.

“The (skid steer) industry continues to trend towards machines with higher rated operating capacities, but not all customers need the super high-end operating ranges,” says Warren Anderson, brand marketing manager at Case Construction Equipment. “We took two of our most popular size classes and lift styles, made them Tier 4 Final, and through improvements in lift cylinders, hydraulics and machine design, were able to substantially increase operating capacities.”

EMISSIONS COMPLIANCE. "Tier 4 Final" has been a hot topic of conversation in recent years. Makers of skid-steer loaders and other diesel-powered equipment have had to place considerable emphasis on emissions regulations known as Tier 4, which have been gradually phased in over the past several years. It's all coming to a head in 2015, so you'll be hearing more and more about machines that are "Tier 4 Final" and ready to go.

One way to achieve Tier 4 compliance is to incorporate a DPF, diesel particulate filter. But doing so can add service complexity to a machine. Some manufacturers, including Case and Bobcat, have come up with ways to get around the reliance on a DPF on some of their new skid steer models; which models is largely driven by machine size and design, engine horsepower, and customer needs. So, when shopping for a new Tier 4-compliant skid steer, be sure to thoroughly discuss this with the dealer.

COMFORT IN THE CAB. Many of the new models hitting dealerships this year boast improved cab designs to enhance visibility, safety and operator comfort. For example, Takeuchi says its new TS Series models offer a more spacious operator station, along with standard foot throttle that allows the operator to change the engine speed without taking their hands off of the controls.

NEW, FAMILIAR NAME NOW IN THE GAME. A big newsmaker this year when it comes to skid-steer loaders is Kubota. The company's first-ever skid steer models, the SSV65 and SSV75, are scheduled to hit dealerships in June. These machines come standard with two-speed travel for faster grounds speeds, whereas many other models on the market offer two-speed as an option.

POWER AND PERFORMANCE. As is the case when shopping for any piece of machinery, contractors do need to pay attention to key performance specs. These include measures such as engine horsepower, hydraulic pressure, rated operating capacity and bucket breakout force.

In looking at some of the leading manufacturers' new models for this year, rated operating capacities could range from 1,500 pounds all the way up to 3,700 or better. As for bucket breakout force, this could range from less than 5,000 pounds to nearly 9,000. As you shop and compare, make sure you're explaining to your dealer what you are looking to do with the skid steer—so he can help match the right machine and performance to your needs.

Check out the latest skid-steer loaders in our online Product Guide.

How to Choose the Right Skid Steer for Your Landscaping Operation