Web-based tools can help speed up the estimating and proposal-building process for landscape contractors, resulting in less cost, happier customers and more time to focus on other areas of the business. 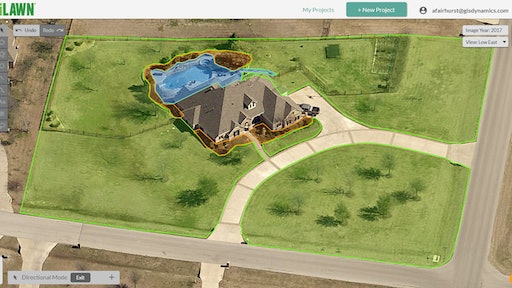 Landscape contractors should always look for ways to save time on laborious, unbillable tasks that not only add cost, but also fail to add value for the customer. The estimating and proposal-building process is a chief example. That’s not to say it isn’t important. In fact, competitive prices and a healthy bottom line depend on meticulous attention to detail. But when you look at the traditional ways many contractors estimate and bid, there is often a tremendous amount of redundancy, inefficiency and wasted time.

Property measuring is one of the first things that comes to mind. Mike Rorie, CEO of GIS Dynamics, knows this well. He was a successful landscape company owner before joining GIS Dynamics in 2010. GIS Dynamics is the creator of Go iLawn, a web-based tool that allows users to measure properties remotely.

“If a prospective new client called from 20 miles away asking for a price, the first thing you’d probably want to do is drive there to take some measurements with a measuring wheel,” Rorie says. “When you’re using Go iLawn, on the other hand, you can look at photos of the property right when you’re having that first phone conversation with the client. You can have the property measured in less time than it would take to drive out to the property.”

Through the use of high-resolution aerial photography, Go iLawn allows users to view properties online. Users can then capture accurate measurements and make notations using Go iLawn’s built-in tools. “Anything you see in an image can be measured and counted,” Rorie points out.

Back in 2009, when Go iLawn was first introduced, devices like smartphones and iPads were a novelty. Thus, Go iLawn was initially developed as a web-based tool for computers. Now an updated version is available that is designed to work on mobile devices.

“The new Go iLawn still has all of the same features as the original, such as the high-resolution aerial photography, and measuring, labeling and color-coding tools,” Rorie says. “Only now, everything is cloud-based.”

An Australian company offers a similar type of online measuring tool. Nearmap, which has had a U.S. presence in Utah for the past five years, caters to roofing, real estate and utility industries. But Mike St. Louis, Nearmap’s director of marketing and demand generation, says landscaping is another important market for the growing company.

“We did our first Green Industry & Equipment Expo (GIE+EXPO) in October,” St. Louis says. “It was great. We generated a lot of really solid leads.” Many of the leads were from smaller, family-oriented landscape firms in which the owners wear several hats. St. Louis says that, on more than one occasion, a wife would say, “You’re in the field doing the work all day, but I’m back in the office doing all of the bidding and prospecting. I need this tool.”

The prospecting component is important to mention. Online measuring tools can help contractors scope out properties they’d like to pursue as new clients. Having insights on a property when first reaching out to a prospective new client can give the contractor a nice head start. This is especially the case when high-quality aerial images are in hand. The client sees a level of preparedness and professionalism that is rather unique.

Some landscape contractors assume that free services, such as Google Earth, can provide the images and image quality they need. According to St. Louis, nothing could be further from the truth.

Nearmap contracts with pilots who fly the country to capture aerial photos. The small fixed-wing planes are equipped with proprietary high-definition camera systems. “These cameras capture images that are four times the clarity of satellite images,” St. Louis points out. “The pilots fly two or three times per year so images are always up to date. They capture approximately 430 metropolitan areas, which is roughly 72 percent of the U.S. population.”

Nearmap images are offered in three views—vertical (top-down), panorama and oblique—providing users with a kind of 3D look at a property. Similarly, Go iLawn imagery is provided in five views: top-down, North, South, East and West.

“Go iLawn purchases its imagery from a company called Pictometry,” which also shoots high-resolution photography from low-flying planes, according to Rorie. “The five views we get are far superior to satellite imagery, which only provides a top-down view,” he continues.

Making Use of Online Measurements

With online property-measuring tools, contractors still need to have a good handle on their production numbers. For instance, Go iLawn or Nearmap can help measure the different elements of a property, but in order to accurately estimate the job, the contractor needs to understand how long it takes to complete different tasks relative to the measurements.

An online measuring tool makes a lot of sense for landscape maintenance and lawn care contractors. Holiday lighting companies can benefit since they are in need of measurements, such as tree and shrub quantities and heights, roof dimensions and gutter lengths, as well. Snow removal contractors can also benefit since they are primarily interested in parking lot dimensions, driveway and sidewalk lengths, etc. Annotation tools allow contractors to specify, for instance, where snow should be piled on an image.

Likewise, irrigation contractors can note where lines are running and sprinkler heads are located, complete with dimensions. “You can export a property image with those objects on top,” St. Louis explains. Those images can then serve as site maps to help crew leaders better manage projects. Additionally, images from Nearmap can be brought into certain design software to serve as the base layer of a landscape design.

Landscape design can be another time-consuming, laborious task. Shayna Orr knows this as well as anybody. After earning a master’s degree in landscape architecture from the University of Oklahoma, Orr moved to San Diego and began working for a large landscape architecture firm. She didn’t like the fact that she was spending most of her time behind a desk, so she eventually took a different job as a designer and sales representative for a smaller paver company.

In search of a more efficient way to handle the design and proposal process, Orr began building an app for personal use. Once she started showing it to others, she realized that many landscaping professionals shared the same pain points with the process she was experiencing: sketch a design on paper, meet with clients to look at catalogs, fine-tune the design and produce a proposal, meet with the client again to discuss the proposal, often revise the proposal based on budgetary needs, redraw the sketch and recalculate the proposal, and repeat as many times as necessary.

This process is not only time-consuming, but it can also become drawn out over a long period of time, which is rarely good for the client or the pro.

Orr calls her solution BIDNANO, as in “bids in a nanosecond” or “really fast bids.” Using the BIDNANO app, users can draw designs on a tablet or even a smartphone, so any future revisions can be made electronically—and easily.

One interesting feature is that users can select materials from a pre-populated catalog broken down by category, i.e., hardscapes, lighting, turf, pebbles, fencing, plants, trees, mulch, etc. Once the different materials are selected, the user can begin sketching the design and pulling in different elements. Different types of materials can also be color-coded so they are easily identified on the sketch.

The per-unit pricing associated with each type of material is automatically populated in the client proposal tool. Measurements and quantities are also automatically calculated because the sketch is to scale. BIDNANO then calculates the total price of each line item while also tallying a total proposal price as the design is built.

Like with online measuring tools, a landscape company does have some back-end work to do. In the case of BIDNANO, materials and pricing need to be entered into the app. Orr says her company can assist with that for a fee. However, she says it is not a very complicated process. Material vendors should also be eager to assist by providing electronic price files, which can be easily uploaded into BIDNANO.

“The other thing is that we’re already assembling a large database of common landscape products,” Orr points out. “So then a user would just have to customize pricing for different items.”

Saving Time Is a Good Investment

Orr is investing her own money to develop the BIDNANO prototype. She is also talking with investors, but is striving to refrain from going down that path.

To make BIDNANO commercially available in 2019, Orr is instead conferring with dozens of landscape companies about pre-ordering. She’s hoping for roughly 75 customers to pre-order. As of early November, she was feeling confident about getting there, although she wasn’t really surprised. After all, she personally experienced the time savings of BIDNANO. She could see from the beginning what a good investment it could be for landscape contractors.

Rorie and St. Louis can say the same about online property-measuring tools. For a relatively modest monthly investment, the savings and overall benefits really add up—regardless of company size.

For smaller companies, the owner could delegate the task of taking calls, qualifying properties and capturing measurements. “The point is that the busy owner/operator doesn’t have to spend so much time bird-dogging all of these go-sees,” Rorie suggests.

For larger companies that are more systems-driven, a web-based measuring tool creates speed and consistency. “Large companies often order up the addresses they want measured and have the images sent directly to their estimator,” Rorie says. “Then the estimator does the measuring before sending it on to the salesperson to do the final pricing and negotiating.”

Landscaping is still a people business, though. Online measuring tools and design/build apps aren’t going to completely replace site visits and face-to-face interaction. But they can help landscaping professionals save time and fuel, improve the customer experience, and get ahead of the game—not to mention the competition.

By following these tips, contractors can keep their trenchers running year-round and prevent the cold season from putting a freeze on their business.
Ditch Witch
Nov 23rd, 2020

Each year a different national forest is selected to provide a tree to appear on the West Lawn of the U.S. Capitol building for the holiday season.
STIHL Inc.
Nov 25th, 2020

By following these tips, contractors can keep their trenchers running year-round and prevent the cold season from putting a freeze on their business.
Ditch Witch
Nov 23rd, 2020

Sytsma has worked as an OEM sales manager at Kawasaki for the past four years before being promoted.
Kawasaki Motors Corp.
Nov 23rd, 2020

John Deere has obtained 5G licenses in five counties in Iowa and Illinois as part of a FCC auction for the CBRS 3.5 GHz spectrum.
John Deere
Nov 19th, 2020

This synthetic turf cooling system is also being used at four other sports facilities across the nation that will host domestic soccer.
Nov 17th, 2020

If you're applying any kind of a knockdown be it Cheetah Pro or Roundup or anything like that, always include a pre-emergent herbicide
Ryan Whisner
Nov 16th, 2020