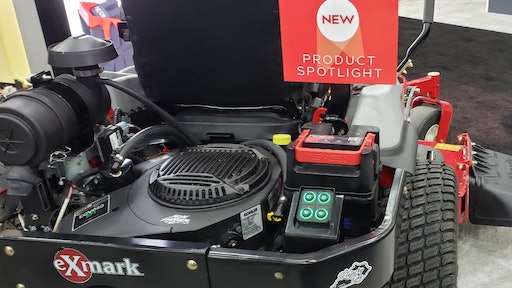 Nexcel’s new product is a sealed oil cell, like a cartridge, that is installed into the machine in one step. Instead of draining the oil, the entire Nexcel cartridge is replaced each time.
Nexcel

Nexcel, the innovation division of BP, is gearing up to roll out a new active oil management system that the company says will dramatically decrease the time needed for oil changes, creating new efficiencies while also boosting recycling and energy sustainability.

“What normally takes about two or three hours will take about 90 seconds,” Steve Goodier, founder and CEO of Nexcel, said in an interview. He said that only about 20% of oil is reused after changes. “The rest of it is lost. … We want to change that.”

For use in the commercial small-engine market, Nexcel’s new product is a sealed oil cell, like a cartridge, that is installed into the machine in one step. It includes all oil needed for an engine. Instead of draining the oil, the entire Nexcel cartridge is replaced each time.

Including the filter, the process takes only about 90 seconds. The precise oil management system also minimizes the risk of oil spillages. The simplicity makes it ideal for the lawn and landscaping industry, where engines work at maximum output for prolonged periods, Goodier said.

“And we can do it anywhere,” he said, noting a visit to a maintenance shop is not required. Such improvements can have notable impacts on large fleet efficiencies.

Goodier said the aim is to price the Nexcel cartridge at roughly the cost of taking a vehicle in for an oil change at a dealer: $55 to $60.

Sustainability and efficiency are key

Quality of supply is the biggest hurdle for efficient re-refinement of used oils, Nexcel notes. Lack of segregation can lead to the supply of heavily contaminated, poor quality oils that require significant cleaning and filtering.

Nexcel’s new offering provides that segregation and can promote the re-refinement of extremely high-quality base oils with increased yield, reducing the reliance on natural resources.

“The recyclability is what really drives us,” Goodier said

The Nexcel product is designed to be tailorable to individual small commercial chassis manufacturers’ specifications. It can be used across a myriad of engine brands.

It will become available in June 2020. In the meantime, Goodier said Nexcel is amassing trial users in the field to help it with six months of intensive testing before the official launch. The idea is to reinforce lab results with demonstrable in-field testing, he said.

The market is ready for plug-and-play

The results of a Nexcel commissioned survey showed a favorable response to its active oil management system.

Of more than 1,700 respondents to the survey conducted of Lawnsite.com subscribers, 82% were interested in having Nexcel technology installed on their next machines. Based upon survey data that showed 91% of maintenance is carried out in-house, if every respondent used Nexcel on all their machines, a total of 12,000 working days could be saved annually, the company said.

The survey results, released in conjunction with the 2019 GIE+EXPO in Louisville, KY, in October, affirmed what Goodier said he found in-person at the convention. He described it as “amazing interest” and added: “I’ve lost my voice talking to so many people.”

Keeping Up with Evolving Engine Maintenance