A wasp has been discovered that acts as early warning device for Emerald Ash Borer infestations. 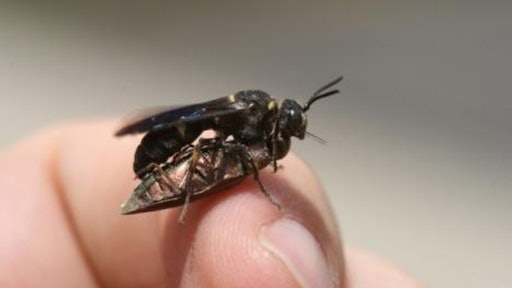 Researchers confirmed that Cerceris fumipennis (Cerceris), a native wasp that preys on Emerald Ash Borers (EAB), was found at Emerson Park in suburban Skokie, IL. The discovery was a result of a partnership between The Morton Arboretum and the Illinois Parks and Recreation Association.

Now, researchers hope that the wasp will serve as a sort of “canary in the coal mine”, or an early warning system for EAB infestation, in areas where EAB has not yet been found, according to Dr. Frederic Miller, Research Associate at The Morton Arboretum.

“By the time humans are able to detect EAB visually, the infestation is usually well-established. We hope this wasp will serve as an effective monitoring tool, giving us an earlier read as EAB makes its way across the country,” says Miller.

Cerceris wasps nest in the ground, commonly in open areas of hard-packed sandy soil with ash trees nearby. Athletic fields, such as ball diamonds, volleyball courts, horse shoe pits, and even parking lots are common nesting locations. The nests are characterized by pencil-diameter holes on top of little mounds of sand. The wasps are most active during summer months, when they feed on a whole family of wood-boring insects called Buprestid, of which EAB is a member, according to Devin Krafka, Research Assistant at The Morton Arboretum.

“Cerceris is a parasitic wasp. It goes out to find a buprestid, or a wood-boring insect like EAB, stings it, and brings one back to its nest. Later, it will lay an egg on it and place it in its own chamber. When the egg hatches, the larva will eat the beetle,” said Krafka.

To help in the hunt for the wasp, The Morton Arboretum set up a new ‘biosurveillance’ program. The Cerceris Identification and Awareness program (CIA for EAB) enlists the help of park district staff and park users to look for wasp nests and EAB carcasses near them. The Cerceris wasp is a good candidate for this pilot program, as it doesn’t harm humans. This new program asks the community to be ‘Citizen Scientists’ to help fight invasive pests.

“We need park professionals and residents to watch ball fields for signs of ground-nesting wasp activity or the actual nests,” said Edith Makra, Community Tree Advocate at The Morton Arboretum, who leads the CIA citizen science effort. “We first need to locate and confirm the presence of Cerceris so that we can enlist ‘Citizen Scientists’ in future monitoring that can help manage EAB to protect ash trees.”

Once park districts alert The Morton Arboretum about possible nests, Krafka and other research assistants will confirm they belong to Cerceris wasp.

The Cerceris is different from the Oobius wasps the city of Chicago recently released to fight EAB. Cerceris is native to the area and can thrive in our environment. Tiny, almost invisible, the Oobius wasps are from China. Federal officials introduced Oobius wasps in hope they will reduce the number of EAB in the city. Whereas researchers hope Cerceris, a much larger wasp easier for biosurveillance, will help them locate EAB infestations early.