Tree care accident numbers are increasing, serving as a reminder of the dangers of tree care and the need for a focus on safety. 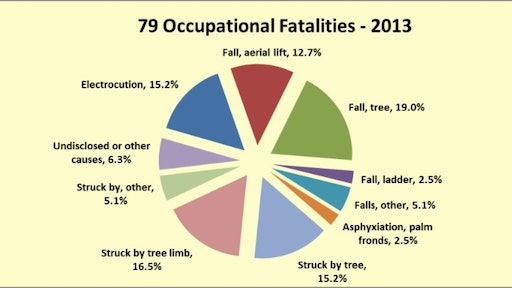 The Tree Care Industry Association (TCIA) reviewed 158 occupational tree care accidents reported by the media in 2013. Of these accidents, 79 were fatal. These findings are very similar to the 2012 findings, where TCIA recorded 84 fatal accidents. However, the number of non-fatal accidents increased dramatically to 79 from the 44 reported during the 2012 calendar year. These sobering numbers are a stark reminder of the dangers of tree care, and highlight the need for tree care companies, along with homeowners and the property managers who hire them to uphold the highest standards for worker safety.

An analysis of the fatal accidents categories revealed the following insights:

"Unfortunately for the industry overall, serious accidents seem to be increasing," said Peter Gerstenberger, senior advisor for Safety, Standards & Compliance for TCIA. "We need to transform the industry and create a safety culture that will keep all tree workers safe in an inherently hazardous occupation."