The award recognizes individuals for communication efforts regarding green space and environmental issues. 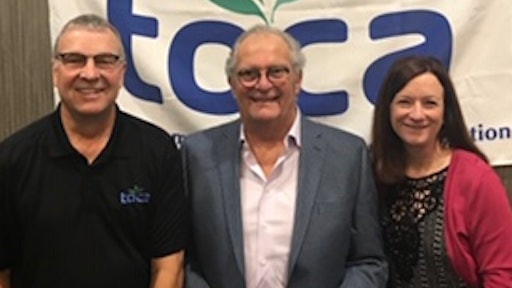 The award, which recognizes individuals for outstanding communications efforts regarding green space and environmental issues, was presented during TOCA’s 30th Annual Conference in Charlotte on May 1. He is the 21st recipient of this award.

For nearly 60 years, Goldenberg has been a mainstay in the professional lawn, landscape and professional pest management industries. His extensive government affairs expertise and acumen for working with regulators has helped businesses – big and small – successfully navigate the inherent challenges of working with pesticides both residentially and commercially.

Goldenberg is widely known for his daily e-mails detailing local, state and national news surrounding the use of pesticides and fertilizers. His extensive knowledge of regulatory affairs surrounding these industries has made him a sought-after speaker, advisor and committee and task force participant in state houses and hearing rooms across the country.

“This award caps off a long 57-year career. I respect and appreciate this award,” Goldenberg said. “Communications have and always will be vital to factually sharing the messages that represent our business. But don’t make the mistake of assuming your story has been heard; it’s an on-going process.”

Goldenberg has a bachelor’s degree in entomology from the University of Florida. He owned his own pest control company – Alert Lear Pest Control in Miami – before selling his business and starting an illustrious 28-year career at Terminix and TruGreen.

He formed Namron Business Associates in January 2014 with the goal of bringing his decades of experience in the lawn care and pest management industries to other companies and associates.

Clients, among others, have included Terminix, TruGreen and the National Association of Landscape Professionals (NALP), where he imparted dynamic knowledge and guidance in areas such as regulatory compliance, public affairs and legislative consulting.

“Norman is a true gem. His knowledge, energy and compassion make him a true industry champion,” said Cindy Code, executive director of Project EverGreen. “His tireless efforts to communicate factual and up-to-date information on vital issues impacting business owners and consumers are admired and appreciated by thousands nationwide. Norman is a natural environmental communicator and deserving of this prestigious award.”