Tree-hopping Insects are Spreading a Fatal disease to Florida 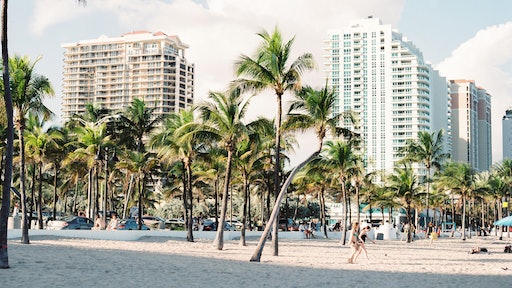 Trees associated with the state of Florida dying from an assault by fatal disease caused by an insect.

Lethal bronzing is spread by a plant-hopping insect and has become nearly a statewide problem in just over a decade in decimating the official state tree, the broad-leafed sabal palm. The disease dries out the state's iconic palm trees into crisps within months and leaves no chance for survival once infected.

To date, tens of thousands of palm trees have died from the bacterial disease, and the pace of its spread is increasing, adding to environmental woes of a state already struggling to save its other arboreal icon, citrus trees, from two other diseases.

“Getting this disease under control is essential because it has the potential to drastically modify our landscape,” Brian Bahder, an entomologist who studies insect-borne plant diseases told the Associated Press.

Bahder is a leader in the state’s battle against lethal bronzing. He believes if nothing is done all the palm trees will eventually die.

Some preventive measures can be taken, but once infected, uprooting the tree is the only practical solution.

The disease is transmitted solely by a tiny winged insect sometimes called the American palm cixiid or, generically, a treehopper. These specific treehoppers (there are other kinds) inject the bacteria through their saliva when feasting on the sap from a palm’s leaves. Any palm cixiid that later feeds from the tree will pick up the infection and pass the bacteria to more palms.

Lethal bronzing reportedly originated in Mexico, also has been found in parts of Texas and throuhout the Caribbean. There is concern that it could migrate to Arizona and California, infecting date palms and damaging the fruit crop. According to AP, the disease has already heavily damaged Jamaica’s coconut plantations, and Brazil is taking preventive measures to avoid invasion.

Bahder has been able to study the disease just outside his office at the University of Florida’s agriculture research station near Fort Lauderdale. A grove of the palms is a mix of dying and dead.

“To understand the disease, I need to watch it spread and see what it is doing,” he said.

The tree disease first struck Florida near Tampa in 2006 and has since been found from the Keys in the south to Jacksonville in the north.

Lethal bronzing’s first Florida appearance came near Tampa in 2006, but it’s now found from the Keys in the south to Jacksonville in the north.

To check the spread, Florida's state agriculture department regularly inspects palm nurseries and certifies those found free of the disease. If infected trees are discovered, they’re destroyed and the nursery’s remaining trees are quarantined for at least six weeks.

The T5000 is a scaled-up version of Turfco’s mid-sized riding applicator, the T3100 Spreader/Sprayer that has been a proven performer in the market since 2015.
Turfco Manufacturing
January 25, 2021