Speakers message at the meeting was consistent: Inescapable changes are coming that will impact everyone, no matter who you are. 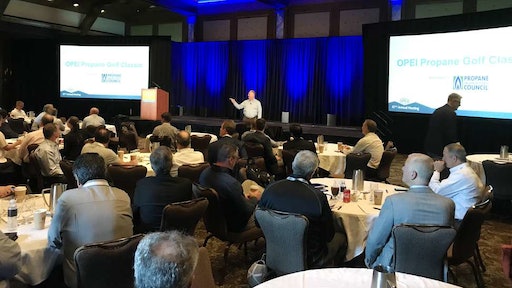 OPEI’s 67th annual meeting, open to all association members, was recently held in Park City, Utah where attendees got a peek into the future of the economy, technology and issues impacting the outdoor power equipment industry.

The speakers, which included Dr. Lior Zoref, with a Ph.D. in crowdsourcing, best-selling author, and TED speaker who has spoken at The White House, Google, MIT Media Lab and LinkedIn; Dr. Alan Beaulieu, president and principal at ITR Economics and a Senior Economic Advisor to numerous U.S. and international trade associations; and Paul Zikopoulos, named one of the “50 Big Data Twitter Influencers” by SAP, a consultant for “60 Minutes” and multiple universities, were consistent in their message: inescapable changes are coming that will impact everyone, no matter who you are.

The OPEI Board of Directors also met in conjunction with the annual meeting and mapped out strategic plans for the coming changes in business.

“In addition to what’s occurring with the economy and technological shifts, the industry is facing a number of pressing issues with the emissions changes in California, impact of tariffs on trade, and ongoing threats to the managed landscape,” said Kris Kiser, president and CEO of OPEI. “The board discussed these issues at length and mapped out a game plan.”

Kiser noted that the OPEI board also discussed the continued growth of GIE+EXPO, the industry’s signature trade show held annually in Louisville, Ky.

“New this year is a partnership with Louisville Tourism on a ‘Land in Louisville’ campaign designed to educate the fly-in audience that coming to the show is easy and affordable when planned in advance,” he said.

He urges all industry members to prepare for the next big meeting of the industry at GIE+EXPO, October 16 to 18, 2019, in Louisville, KY.

“We anticipate again, as we’ve seen the last few years, that this show will be larger, more diverse, offer more training, education sessions,  and showcase more new products than ever before,” he said. “With the addition of in-tree training, Hardscape House, a special area for the hardscape industry members, along with a second Mutt Madness pet adoption event, are some of the new features at GIE+EXPO. we should have record attendance – again.”

The next board meeting also will be held October 16, 2019, in Louisville, KY, during GIE+EXPO.

Ed Cohen, retiring OPEI board member from Honda, was thanked for his decade of service.

The OPEI board in recognition of the extraordinary success of the association’s TurfMutt education platform, now celebrating its tenth anniversary, also moved to create the TurfMutt Education Foundation, which will take the program to the next level.

Next year’s annual meeting for members will be held at the El San Juan Hotel, June 16-18, 2020 in San Juan, Puerto Rico.

OPEI has secured an extraordinary “hurricane-rate” for attendees as the hotel is now reopening after a major renovation following Hurricane Maria.