Knoxville was recognized specifically for its adoption of clean, propane-powered mowers, among other environmentally friendly programs 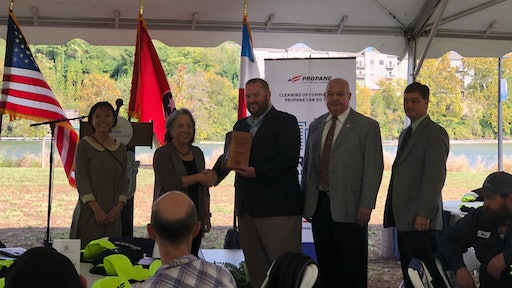 The city of Knoxville, TN, was recognized as the 2019 Green Leadership City, a distinction awarded by the Propane Education & Research Council (PERC) to one government agency in the United States each year.

Knoxville was recognized specifically for its adoption of clean, propane-powered mowers, among other environmentally friendly programs that support the city’s sustainability and emissions-reduction goals.

Mayor Madeline Rogero accepted a $5,000 donation from PERC during a celebration event at Suttree Landing Park with city officials and Public Service Department employees, who operate the propane mowers regularly. The donation will benefit Knoxville’s CAC Beardsley Community Farm, a non-profit based in Knoxville’s Malcolm Martin Park, which is dedicated to promoting food security and sustainable agriculture.

“The Green Leadership City Award is given to one community nationwide every year in recognition of a commitment to environmentally-friendly and sustainable practices,” said Jeremy Wishart, director of off-road business development for PERC. “Over the past few years, the city of Knoxville has worked to demonstrate environmental stewardship in its community by maintaining the city’s greenspaces with propane mowers — and we want to thank them for that.”

In an effort to reduce its carbon footprint, the city of Knoxville began transitioning its mower fleet to propane in 2015. As of September 2019, 18 of the city of Knoxville’s 25 commercial mowers were fueled by propane, making the city’s fleet one of the largest propane mower fleets in the state of Tennessee. The city plans to continue transitioning to propane equipment.

“This year we are on track to exceed our 20% reduction target in greenhouse gas emissions from city operations,” said Madeline Rogero, Knoxville Mayor. “We’ve reduced our fleet emissions by 10% from 2005 levels through strategic investments in fuel efficiency and alternative fuels. By maintaining local green spaces with propane mowers, we’re contributing to a healthier environment and providing the same excellent services our Knoxville residents expect.”

The propane mowers are being used by the city’s Horticulture and Public Service Departments to maintain 400 acres of parks, city right-of-ways, and an average of 1,947 overgrown lots annually.

Carries 500 lbs and allows you to travel at the speed of your mower
Mulch Mate
July 30, 2020
Follow Us