VMA Protesters Demand Clean Water for Newark, What Does Contaminated Water Mean For your Lawn?

Demonstrators outside the VMA's brought awareness to the water crisis in Newark. What does does lead-contaminated water mean for your landscape? 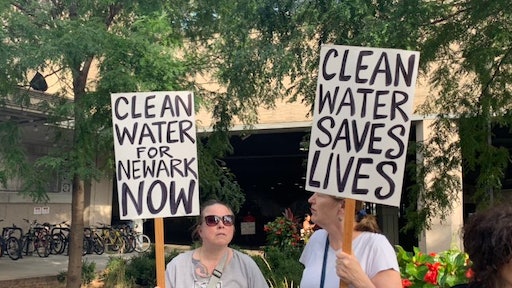 What the award show wasn't ready for: protesters demanding for clean water.

According to the New Jersey Star-Ledger, protesters gathered outside the arena chanting "Want our water free, we don't need no MTV!" Other signs included "Get the Lead Out" and "Fix Newark Now."

The #VMAs are in Newark, NJ this year. The same location as another #WaterCrisis like #FlintWaterCrisis. #NewarkWaterCrisis so a protest was organized to greet the awards show. The police came with horses as the protest took the streets. #WaterIsLife pic.twitter.com/RMbA4jWKoh

The VMA’s were in Newark and you can guarantee these celebs didn’t drink the water there bc * NO ONE CAN* I’d love to see how many bottles were used and how many people were in attendance ignoring the fact that the water contaminated. That’s the flipping tea. 🤯😤 #VMAs2019

The city has had high levels of lead in its water supply for over two years, Time reports. Decaying plumbing lines are blamed for the contamination, with some tests reporting lead levels far higher than the EPA 15 ppb limit. CNN reports that Newark showed lead levels of 76 ppb in 2018 - nearly five times the level that it's supposed to be.

Some Newark residents have had to rely on drinking bottled water, racking up expenses.

The water contamination in Newark has been compared to Flint, Michigan's water crisis - which hasn't had clean water since 2015.

Social media users were quick to point out the protests, also noting that the VMA's didn't mention it either.

The Newark administration even sent a memo to attendees of the #VMAs that the water is safe to drink.

According to  a study done by Michigan State University, lead naturally occurs in soils, ranging from 10 to 50 parts per million (ppm), making it safe to use garden produce grown in soils with total lead levels than 300 ppm.

Read Next: Committed to Customers and Water Conservation

According to the study, by calculating the square footage of the garden, the volume of water used over the growing season, the concentration of the lead in the water used for irrigating, along with previous lead level in the soil, it would found that lead newly added in the irrigation water had a minimal effect to soils that were already present in Flint soils. The demonstration saw 93, and the season’s irrigation water would increase lead in the top six inches of soil by just 0.0025% increase in the soil lead level of that garden.

Prior to the VMA's, Essex County Executive Joseph DiVincenzo Jr. announced a $120 million loan for Newark to expedite the replacement of 18,000 lead service lines that are causing the contamination, NJ.com reports. The work is predicted to take less than three years.

If you don’t grow fast enough, you can get stuck!
August 28, 2020
Irrigation & Water Management