7 things to focus on with your fall lawn care program, including fertilizer, overseeding, and insect, disease and weed control. 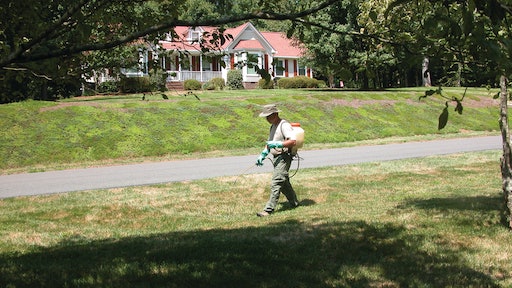 Last year at this time, the majority of the country was dealing with severe drought-like conditions. This year, most of the western half of the country is still fighting that battle. But the eastern half has had plenty of rain—in some instances, almost too much. One way or another, extreme weather conditions definitely complicate the science of lawn care.

"The Northeast and Upper Midwest have experienced a lot of rainfall this year—a stark contrast to last year's drought," says Jamie Breuninger, technical leader for Dow AgroSciences Turf & Ornamental. "As a result, we've seen incredible bloom of winter perennials and broadleaf weeds, which have produced a lot of weed seed. As summer turns to fall, be aware of broadleaf weed areas resulting from weed seed germination.

"Turf loss is also common in summer, and broadleaf weeds germinate very well in areas of thin turf," Breuninger continues. "Take note of these problem areas for planning broadleaf weed applications this fall or next spring."

According to Adam Manwarren, turf and ornamental brand marketing manager for FMC Professional Solutions, the cooler fall months present an optimum time period for controlling perennial broadleaf weeds such as white clover, wild violets, dandelions and plantain. "Weed control is better when plants are not under stress due to heat and drought," Manwarren says. "Plus, perennial broadleaves take in nutrients in the fall for storage during winter months. A fall-applied broadleaf herbicide will accompany the nutrients stored in the crown."

"With this year's rain, we're also seeing a lot of weeds in landscape beds," Breuninger adds. "It's a great opportunity to upsell bed weed control for the fall and upcoming spring."

Be sure to check out our "Top Late-Season Lawn Care Products for 2013" for a look at some herbicides that can help you gain fast control of a broad spectrum of perennial broadleaf weeds this fall and winter, including QuickSilver and SquareOne from FMC, Dimension 2EW and LockUp from Dow, and Tenacity from Syngenta.

Speaking of Tenacity, recently conducted research suggests that it can provide effective weed control on newly seeded turf, making it ideal for both new lawn installations and existing lawn renovations.

"One of the very unique properties of Tenacity that I really like is that we can apply it at planting and get very good broadleaf and most annual grass weed control," says Charles T. Golob, MS, supervisor of the Washington State University Turfgrass Research Facility in Pullman, WA. "We have tested it as a pre-emergent, at-planting and post-planting product, and easily get over 90% weed control." Golob tested Tenacity on Kentucky bluegrass, perennial ryegrass, tall fescue and fine leaf fescue.

"If a lawn care operator is establishing a new yard from seed, he can spray Tenacity when he plants, and it will do an excellent job of controlling weeds," Golob adds. "Also, for lawn renovations, operators could start out with a glyphosate, then overseed and apply Tenacity at the same time."

FMC's SquareOne herbicide can also be used on newly seeded lawns. "Unlike some other products that are harsh on new turf or require multiple applications, SquareOne can be applied just one day before seeding or as early as seven days after emergence on most cool- and warm-season grasses," Manwarren says.

The main thing to remember is that fall is a great time for lawn renovations. Soil is still warm, temperatures are lower, and timely rains help to aid seed germination. Using products such as Tenacity or SquareOne to minimize weed populations at the time of renovation allows for maximum turf density and, perhaps, the need for fewer herbicide applications and/or reseeding the following spring.

The red imported fire ant (Solenopsis invicta) is a stinging nuisance and potentially serious health threat in more than 13 Southern states, according to Manwarren. "Fall is an excellent time to treat for fire ants in customers’ lawns or on commercial properties because fire ants become more active when temperatures cool down (air temps between 70-85°). In addition, fire ant mounds don’t stay very deep in the ground in cooler fall weather, which makes them easier to control with a granular insecticide."

4. Dallisgrass (in the South)

Another persistent problem in Southern turf is dallisgrass. "A tufted, coarse-textured perennial, dallisgrass grows in a clump and slowly increases in diameter as its shallow, underground stems (short rhizomes) grow outward," Manwarren explains. Unsightly and hard to manage, dallisgrass is also drought-resistant and frost-tolerant. Fall herbicide applications give lawn professionals a jump start on dallisgrass control next spring.

5. Stink Bugs (in the North and Midwest)

Stink bugs don’t bite or carry diseases, but can be a major nuisance to customers in Northeastern and Midwestern states, Manwarren says. "Readily recognized by their shield-shaped bodies and mottled brownish-gray color, stink bugs enter buildings to avoid the onset of cooler temperatures. They generally hide out under siding, and around windows and doorframes.

"The best offense against stink bugs is a good defense," Manwarren continues. "An early fall treatment with a residual insecticide will help prevent stink bugs from entering your customers’ homes." FMC's Talstar Professional insecticide, for example, may be applied as a perimeter treatment to provide long-lasting control of stink bugs and more than 75 additional pests.

This spring and early summer's extensive rainfall, mixed with high temperatures, is a recipe for summer disease growth—particularly brown patch or large patch. "Be careful not to over-fertilize and, in doing so, stimulate disease problems," Breuninger says.

"Lawn care operators (LCOs) should also keep an eye out for large populations of Japanese beetles and white grubs this fall," Breuninger continues. "If there's a good egg hatch in the summer followed by a dry fall, conditions are ideal for Japanese beetle damage to turfgrass. We also may see high grub pressure this year."

Other things to keep in mind

Because of the ample rains the eastern half of the country had been experiencing into July, Breuninger says the stage had been set for a really good summer. However, as you well know, conditions can change quickly.

"If the consistent rains slow down, it will be setting up the turf for a horrible drought situation," Breuninger says. "LCOs should be managing fertility at this time of year to ensure that the turfgrass is not too succulent if dry weather occurs. Once the weather cools, LCOs should increase the fertility in September and October for cool-season grasses."

Along with closely managing fertility, contractors should also be paying close attention to proper mowing height and frequency in the fall months. Mulching and recycling of grass clippings can also be a good idea, Breuninger says. Proper irrigation practices should also be followed.

Finally, Breuninger reminds contractors to promote aeration in the fall months. "Fall is a good opportunity to open up the turf and let it regenerate. If a contractor plans to overseed turf, he should always aerate first."

How To Grow Your Lawn Renovation Business

The lawn renovation business is poised to rebound for the next several years. If you're one of the roughly 42,000 contractors looking to grow this line of business—or one of the thousands looking to break into it—here are some things you'll want to know as you establish your plan of attack.

√ It's a diverse, competitive market. But there is still room for more contractors. It's all about who promotes these services the best.

√ Look to your existing equipment dealer for help. Many lawn equipment dealers also sell and/or rent equipment like aerators and dethatchers. If they don't, ask them to. If they won't, look into area rental centers.

√ Many successful lawn contractors make aeration and dethatching part of a multi-step, year-long lawn care program. You should do the same, but don't hesitate to also aggressively sell fall aeration as a stand-alone service to other homeowners in your market. Remember, many homeowners might do their own mowing and fertilizing, but will still hire a contractor to aerate their lawn.

For more tips and insights, read the complete article FOR FREE online at greenindustrypros.com/10742667.

The myth of fall tree trimming