Is It Time to Flip Your Fertilizer Program on Its Head?

Maker of enhanced-efficiency fertilizers says less fertilizer use can be more, and there's a way to do it without jeopardizing your cash flow. 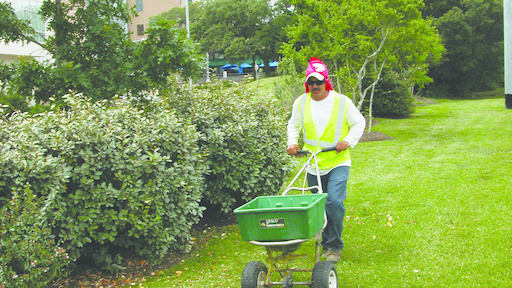 While some residential lawn care contractors have struggled with enhanced-efficiency fertilizers, many others have had considerable success.

Bi-weekly mowings. Two-plus-inch snowfall triggers. Fewer fertilizer applications. All a service contractor's worst nightmare—at least those contractors who are paid on a per-visit basis. OK, "worst nightmare" might be a little sensationalized. But requests for more infrequent servicing definitely do not help those contractors looking to generate as much revenue per customer as possible.

This has been the primary challenge where enhanced-efficiency fertilizers are concerned, according to Eric Miltner, Ph.D., turf and ornamental agronomist with Koch Agronomic Services. Miltner says many lawn care contractors have a hard time departing from the five- or six-application program that has become standard over the past 30 or 40 years.

"The standard program is a fertilizer application every six weeks, supplemented with herbicide and insecticide treatments as necessary," Miltner reminds. "But that standard program is based on six-week windows for fertilizer applications using urea or blends with sulfur-coated ureas, for the most part. So these numerous applications are built into how lawn care contractors route, charge and bill."

Enhanced-efficiency fertilizers may only require two or three, or perhaps just one, application per year. This spooks frequency-obsessed contractors, not to mention their customers who have been conditioned to believe that more is better.

"This has been our biggest challenge where our Spread it & Forget it product is concerned," Miltner relates. Spread it & Forget it is a controlled-release fertilizer that can feed turf for six months or longer, requiring just a single application per growing season. "This jump from five or six fertilizer applications to just one is just too big a jump for many contractors," Miltner says.

While some residential lawn care contractors have struggled with enhanced-efficiency fertilizers, many others have had considerable success. For example, contractors specializing in full-service commercial landscape management have often been able to successfully implement EEFs.

"With office parks, condos and even some HOAs, fertilizing every six weeks might not be that important to a client," Miltner points out. "We've been working with contractors over the past couple of years to help them take a slightly smaller jump, from five or six applications to three, as opposed to all the way down to one."

With three fertilizer applications, it's then just a matter of rounding out your program and teaching your technicians what they can be doing in between those three applications. Koch Agronomic Services has been working with a lawn care company in the Northeast that is getting it down to a science. Miltner outlines what this company's new EEF-based program looks like:

"What this company has found is that, since rounds two and four are nothing but broadleaf weed control, the specialists (technicians) are doing a better job of managing weeds, which has resulted in considerably fewer callbacks," Miltner explains. "Also, since they aren't fertilizing on rounds two and four, the specialists are able to service 20% more lawns each day."

"The economic model is what is really going to drive it for the contractor," adds John Kruse, Ph.D., research agronomist with Koch Agronomic Services. "If he has a contract where he gets paid a fixed fee for providing a certain service each month, EEF technologies work in the contractor's favor because labor often becomes his biggest cost. If the contractor can save a trip across his entire account base, all of that money goes straight to his bottom line."

Also on the topic of labor, Miltner says you should think about the extra work that goes into applying fertilizer. You have to load the fertilizer onto the truck and into the spreader. Then there's the physical act of applying it. But don't forget that you likely have to spend some additional time blowing granules off of hardscapes before you leave the site. All of this time can really add up.

Additionally, Miltner and Kruse concur, you should be thinking about materials use/cost. In the case of the Northeast lawn care company, quite a bit has been saved because these EEFs are more effective at getting nutrients into the plant, Miltner assures. This results in less material use over the course of a season.

Those are some of the economic reasons that should at least get more contractors thinking about the use of EEFs. There are environmental benefits too, Miltner and Kruse point out. Enhanced-efficiency fertilizers come in a variety of forms—each designed to increase nutrient uptake while reducing nutrient loss. There are three primary types:

Controlled-release fertilizers absorb soil moisture and gradually release nutrients over time. They are typically encased in either a sulfur or polymer coating. The speed and timing of nutrient release is influenced by soil temperature and coating thickness.

Slow-release fertilizers also release nutrients over time, but timing and speed are influenced by not only coating thickness and soil temperature, but also other factors including soil moisture and microbial activity.

To many lawn care contractors, products such as these are still "new". Using them also requires a "new" approach; a willingness to depart from the norm and really step up your game in the way of client education.

More contractors who are looking for ways to stand out from the competition, while also making significant contributions to the environment and their companies' bottom lines, are finding ways to make EEFs work. Whether they can work for you is for you to decide.

"The biggest thing for lawn care contractors is knowledge," Miltner says. "We've seen some mistakes because the contractor doesn't know how to effectively use the product. For instance, if you're putting down a controlled-release fertilizer that is designed to last for several months, you have to put down enough of it. You have to understand how the product works."

Not all aerators do the same work. Learn about aerator styles, productivity and application tips from Billy Goat.
Billy Goat Industries
June 9, 2020
Follow Us