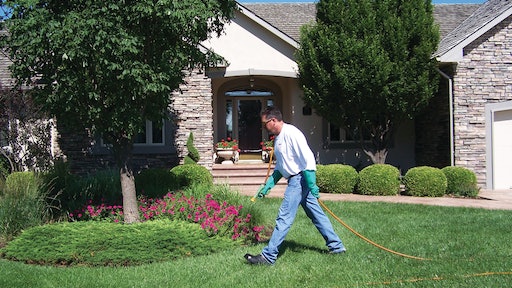 Lawn care contractors operating in Montgomery County, MD, have two years to figure out how they are going to provide lawn care services without the use of pesticides, including herbicides.

After months of deliberation and debate, the Montgomery County Council voted 6-3 to move ahead with Bill 52-14, which bans the use of pesticides on both county-owned and private lawns. The ban will be phased in as follows:

In addition to lawns, the bill also restricts the use of certain pesticides on public and private playgrounds, mulched recreation areas, and children's facilities such as child care centers.

The bill's restrictions do not apply to gardens, and they do not restrict pesticide use for the control of noxious weeds or invasive species, for human health or agricultural purposes, or to prevent significant economic damage. In other words, Bill 52-14 seeks to halt the use of pesticides for what many refer to as "cosmetic purposes", i.e. to make a lawn look nice.

Additionally, one of the amendments to the original bill allows the County's Department of Parks to continue using pesticides on playing fields as part of an integrated pest management (IPM) program. The amendment also requires the Department to develop a plan that leads to maintaining fields without the use of pesticides by 2020. The Department will now conduct a pilot program to begin studying the impact of maintaining fields without the use of pesticides.

Back in September, a substitute version of Bill 52-14 was presented by a council member opposed to the original bill. This version dropped the ban for private lawns and playing fields, and called for a five-field "organic pilot" to test the impact of minimal pesticide use. This substitute bill passed a three-member environment committee vote, but was ultimately struck down when the Council voted 6-3 on October 6 to move ahead with the original legislation.

Montgomery County has a population of roughly 1 million people. It includes the locales of Rockville, Gaithersburg, Bethesda, Silver Spring, and numerous others. Montgomery County is considered one of the wealthiest counties in the country, with a median household income well over $90,000.

Council president George Leventhal, the lead sponsor of the bill, said, "Countless studies have linked pesticides to a wide range of health conditions in children and adults. Since the bill was introduced one year ago, I have received hundreds of reports from constituents of children and pets experiencing adverse effects from the application of pesticides ... The science may never be conclusive since it involves complex chemical interactions, but the absence of incontrovertible evidence does not justify inaction.

"I am extremely optimistic about what the passage of this bill will mean for Montgomery County’s economy," Leventhal continued. "Now that this bill has become law and that harmful chemical treatments will be banned, I think it will foster an extraordinarily competitive industry for alternative lawn care options in the County."

So what's the alternative?

Alternative lawn care options are exactly what lawn care professionals will be in search of over the next two years. With pesticides taken out of their arsenal, many will first look to natural/organic-based products to help manage weeds, insects and disease. There's a big question mark where these types of products are concerned, many contractors will argue.

Hernandez, like most seasoned lawn care professionals, isn't holding his breath. Fortunately for him, though, lawn care (i.e. pesticide and/or fertilizer applications) represents just a small portion of his business. His company is more focused on landscape installations and maintenance.

Chad Stern, owner of Mowing & More in Chevy Chase, MD, is in a similar boat. He subs out all of his pesticide applications as existing maintenance clients request them. Lawn treatments represent just 5% of his overall business. That said, the pesticide ban still disturbs him.

"Whatever positive intentions are behind this bill are horribly misguided," Stern said. "The argument is that this is going to greatly improve public health and safety, yet they don't provide any credible evidence to prove that herbicide and pesticide use in residential landscapes poses any kind of risk. They can go around and say they are making us safer, but there's just no credible evidence to support that. And there are plenty of voices speaking out in opposition, but they seem to be ignored."

Montgomery County Council member Tom Tucker, who was one of the six who voted in favor of the bill, posted this on his Facebook page: "Our first concern cannot be protecting a homeowner's right to the cosmetic benefits lawn pesticides promise, especially when there are alternatives. Our first concern must be protecting public health—especially for our kids—and the environment."

But again, what those feasible alternatives are remains to be seen. "The gentleman who wrote this bill was talking about how everything has worked out great in Canada (where many provinces have also banned pesticide use), and how people are now using organic products to do exactly what herbicides had done," Stern said. "But that's just not true. He has provided no credible support for those kinds of statements."

In fact, earlier this spring, a Weed Man franchisee in Winnipeg said his operating costs have skyrocketed due to a lawn care pesticide ban there. "Our product costs have gone up 700%,” David Hinton, president of Weed Man Winnipeg, told CTV News. “That's a big change for everybody. And it's not just the product costs. It's the way we apply it, the equipment we need, the maintenance on that equipment. Everything changes."

Stern said he had been actively monitoring Montgomery County's Bill 52-14 from its early stages. "I sent an email to our clients explaining what was being proposed and how it might impact the lawn care services they receive, and included the names and contact information of the council members," said Stern, who added that he didn't want to advocate one way or another. "I just wanted to educate and inform my customers on the very impactful legislation that was being proposed."

Data provided by Montgomery County suggests that there was overwhelming public support for the ban. According to a September 15 memo to the Transportation, Infrastructure, Energy & Environment Committee, analysis of correspondence received as of September 11 showed the following:

Organic-based pesticide alternatives will be just one component to a Montgomery County lawn care contractor's new program, albeit a critical component. But overall, the lawn care model must now shift to a more soil health-based approach.

A white paper written in 2010 by Doug Wood and Charles Osborne was referenced during the debate over Bill 52-14. It examined the cost comparison when using a conventional chemical turf management program vs. a natural/organic program on athletic fields. According to the white paper's findings, the initial cost of the organic-based program was higher for the first two years, but then was less costly in years three, four and five. In fact, the organic program was roughly 25% less costly in year five.

Why did the organic program prove to be less costly over a three- to five-year period? The organic-based program worked to improve soil biology and water-retention capabilities, resulting in less fertilizer and irrigation needs over time. Additionally, the hardier the grass became, the less susceptible to weed infestation it was.

As part of the natural-based program, pesticide applications were replaced by aeration, topdressing and overseeding, along with applications of compost tea and liquid humate—all designed to collectively improve soil, and in turn, turn health.

Landscape contractors have already had success with similar programs. For instance, we reported how Sebastopol, CA-based Pacific Landscapes pioneered an Organic Soil Fertility Program back in 2011. Using similar methods as described above, the company saw reductions in water and fertilizer use, turf compaction and leaching, and an increase in turf root depth. Pacific Landscapes continues to push its organic soil fertility program today.

Whether you agree with a pesticide ban or not, there is no doubt that Montgomery County sets a precedent. As has happened in Canada over the past several years, could more locales across the U.S. begin to follow Montgomery County's lead?

Montgomery County Council member Nancy Navarro said, "As Bill 52-14 is implemented, the education campaign will be key. Educating the public on the intent to reduce major health risks and the effects of these chemicals will be a critical piece of enforcement. This bill will set the national standard for reducing pesticide use and creating a safer and cleaner environment for our communities.”

Tom Delaney, director of government affairs for the National Association of Landscape Professionals (NALP), also wonders if similar bans could emerge in other parts of the country. "NALP held a webinar for its members in May highlighting the threat of a ban in Montgomery County," Delaney said. "We asked our members to be diligent in defense of the industry and to continue to reach out to their customers in the area. Unfortunately, we expect that further local efforts to ban pesticide use on lawns may be possible in the future. NALP will continue to work with members and other stakeholders on any restrictions that may be proposed to ensure the industry is represented."

For a look at some natural and organic lawn care products that might fit into your lawn care offering, visit our online product guide.

Local restrictions and rules on pesticide use are at risk of being thrown out by the 2018 Farm Bill being reviewed by Congress.
September 10, 2018
Follow Us