The Year the World Was Right Again

The landscaping industry is back to its pre-Great Recession level, and bigger companies are the ones most benefitting from the recent growth. Now what about the next few years? 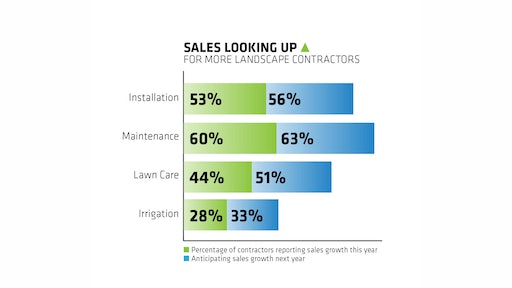 It took a while, but we're back. After a couple rough years followed by several more clawing our way out of a hole, the industry is now larger—and arguably healthier—than ever.

According to research firm IBISWorld, the "landscaping services" industry, when it's all said and done, will have racked up roughly $73 billion in revenues this year (2014). This marks the first year that revenues eclipsed the previous high of roughly $69.5 billion in 2007, just prior to the Great Recession when the industry took a 13% nose dive.

Several economic drivers that influence lawn care and landscaping expenditures are now lining up favorably. They include:

Going forward, IBISWorld expects the industry to continue growing at a steady, healthy pace of around 3% per year for the next five years. Next year, 2015, could even be a little stronger than that. As has been the case for the past several years, there are going to be companies that benefit from the growth, and those that don't. Make no mistake, the market is stronger, but it's still very competitive. More contractors and dealers are expecting to grow, but their growth will largely be at the expense of their competitors. As you wrap up 2014 and head into 2015, ask yourself: Am I poised to outmaneuver my competitors and grow with the industry?

Big landscape companies, with annual sales over $1 million, seem to be faring even better. Roughly 69% saw a bump in installation business this year, 63% saw a bump in maintenance sales, 51% saw an increase in lawn care, and 46% saw growth in irrigation business.

Looking ahead to next year, 75% of big landscape companies expect an increase in installation work, 71% expect to grow their maintenance business, 63% foresee a jump in lawn care business, and 52% expect to grow irrigation sales.

Prices moving in the right direction

Aside from the steadily improving market conditions, one reason many contractors might be looking to spend more on new equipment is because they're finally able to charge a better price for their services.

This rise in the number of contractors, during a time of slow market growth, put significant pressure on pricing. Thus, lowballers became especially villainous in recent years. The lowballer can come in many forms. According to our survey results, 59% of contractors said "little companies" are the bigger culprit, while just 26% said "large companies" are more to blame for lowballing.

Equipment dealers have also been striving to get their pricing in line. As the number of servicing dealerships has dwindled, and demand for equipment service has grown as contractors look to squeeze more life out of their equipment, it only stands to reason that good dealers would begin charging more for their services.

Business tycoons and TV personalities Donald Trump and Vince McMahon helped make the phrase "You're Fired" famous. These days, landscape contractors and equipment dealers have been more apt to say, "You're Hired".

Equipment dealers seem to have right-sized their staffs this year, settling in for what could prove to be a several-year stint of steady, controlled growth. At least three-quarters of dealers maintained staff size this year and plan to do the same next year. One exception is in the service department. Roughly 42% of dealers plan to increase service staff next year.

Again, as the number of servicing dealerships declines, and contractor demand for equipment service grows, the remaining dealers must focus on creating well-staffed, highly efficient service operations. Landscape contractors—many of whom are growing and looking to grow even more over the next few years—will certainly be relying on dealers who can do just that.