Texas Landscape Group has taken off like wildfire, growing to an estimated $4 million in annual revenue after just two years in business. 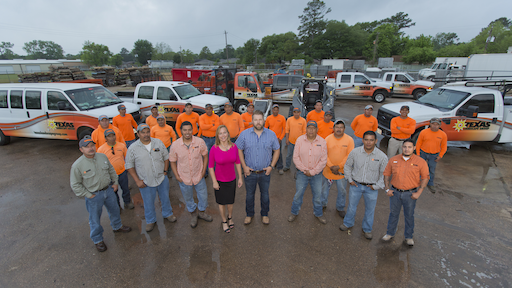 The Texas Landscape Group team has grown by leaps and bounds over the course of its first two years in business.
William Stewart Productions

Some business partnerships are destined for failure. One of the most common reasons why is because the two key principals are just too much alike; similar personalities, skillsets and responsibilities often end up clashing. You can't say that about Carla Sebesta and Jeff Washbrook, though.

Sebesta and Washbrook started Texas Landscape Group in April 2013. Sebesta oversees sales and business development. Washbrook is in charge of operations. That's exactly what the two had been specializing in when they met while working for TruGreen Landcare's Houston branch a few years ago. "We complement each other really well," Washbrook says.

Sebesta had already been with TruGreen Landcare as a key account executive for 10-plus years when Washbrook joined the company in December 2011. He had actually just sold his own full-service company, Crown Landscape, to someone else. "I'd received an offer to run Landcare's Houston branch, so I thought I'd let somebody else deal with the headaches of ownership for a while," Washbrook says. "I just wanted to focus on operations and learning more about the landscaping business overall. I thought that working for a large corporate entity would allow me to do that."

It did—for a while. Within a year, however, both Washbrook and Sebesta were feeling shackled by the typical nuances of a large, national corporation. They started to wonder if they could better serve their customers if they went off and started their own company.

As one of TruGreen Landcare's top sales reps, Sebesta had strong relationships with the majority of her clients—some of which stayed with her and allowed her new company to really hit the ground running. "Now that we've been in business a couple of years and people see what we're doing, we're getting a lot more new clients calling us," Sebesta points out.

"I've had a strong customer following from my early days with Crown Landscape," Washbrook adds. "Having customers follow you for multiple years with multiple companies speaks volumes about how we treat them.

"We're quickly establishing ourselves as a preferred landscape provider city-wide, based on the jobs we're doing and the magnitude of some of those jobs," Washbrook continues. "We've won some awards for our installation work, which helps. Our high retention rate also helps a lot; it's in the high-90s. We keep our clients and don't have much turnover. That's very important because most of our new business is from referrals."

Sebesta and Washbrook knew what they wanted their company to be from day one. "Our company was created to bring a premier commercial landscape management firm to the greater Houston market," Sebesta says. Texas Landscape Group would focus on landscaping practices that more efficiently utilized resources, helped conserve water, and overall helped protect the environment. "Our mission is to then take the time to get to know a client and their property, identify their objectives, and customize their landscape to fit their needs," Sebesta explains.

"We don't want to manage our customers just off a spreadsheet," Washbrook adds. "We want to make sure customer satisfaction is always number one—even if that means extra man-hours on a job."

That said, Washbrook and Sebesta certainly didn't go out on a limb and start their own company to not make any money. By keeping the focus on customer satisfaction and total client management, they're confident that sales—and profits—will inherently follow.

Case in point, "We lost an account to a big national company recently, basically because of price," Washbrook tells. "Within a couple of months, the client came back to us saying that the difference in 'management' was like night and day. So the 'management' of an account is something we really stress. We want to help take some of the work off of the property management companies we work for."

A good example of this is the monthly site report that Texas Landscape Group generates. "We have forms that go out to each client to report on the month's site conditions, along with proposals," Sebesta shares. "It's not in the contract that we provide this, we just do it to be proactive and keep clients informed. Then, our property management clients can turn around and give these reports to their clients."

"We also focus on internal communication at all levels within our company," Washbrook adds, in reference to operations. After all, having a team where every member is pulling equally hard in the same direction is the best way to achieve total customer satisfaction. "We've found that keeping an open dialogue is critical. We have open discussions at each morning meeting; this provides a good learning tool for someone to learn from others' accomplishments or mistakes. We celebrate individual and crew accomplishments. We give awards each week for employee of the week. We really try to make it a team environment.

"We then try to make it all fool-proof by providing forms for employees to use—be it daily, weekly or monthly—to help with any task they may run into," Washbrook continues. As he points out, much of what his employees do is repetitive. "It all comes down to anticipation, keeping organized, communicating, and trying to stay three steps ahead," he concludes.

Back on the account management side, Sebesta also tries to stay a few steps ahead. "It's super easy when you have a service you believe in and employees you know will follow through," she says. "I then make it a point to keep up communication with prospects and current clients—even if it's just sending a note or stopping by their office with no other reason than to just say hello or thank you. It's hard sometimes, but I try to designate at least one day a week to focus on nothing but contacting people by phone, email, or just stopping by in person."

Texas Landscape Group is on pace to generate roughly $4 million in revenue this year. Finding good employees is getting a lot easier now that the company is more established. "Good people who want to work in this industry are seeking us out more and more now," Sebesta says. "We want to treat our employees just as well as we treat our customers."

"We also tend to start employees at a little bit better pay rate," Washbrook adds. "We want to show them that we're serious and that there's a future with our company. They see how we're growing and constantly trying to improve. We show them a career path and how we like to promote from within. It wasn't easy at first, but it's getting a lot easier now."

Nothing was very easy at first. When Washbrook and Sebesta broke out on their own in April 2013, they started out in a small, rented, one-bay building with six employees. Within two months they were up to three bays, and then five with four crews. Within eight months they had grown so much that they had to move into a full-yard setup with an on-site building for offices and storage.

"Now we're close to 40 employees," Washbrook points out. "This includes division-specific managers and account managers who report to both myself and Carla."

Texas Landscape Group has built up a diversified book of commercial business. Roughly 60% of sales comes from construction work, the other 40% from maintenance-related services that include mowing, seeding, lawn care and irrigation repair. Maintenance clients primarily consist of HOAs, hospitals and multi-family facilities. On the construction side, the company does a lot of high-end custom homes, along with some government work.

"Getting this (WBE) label took nearly a year and required a ton of paperwork," Washbrook points out. "But now that we have it, doors are opening that probably would not have otherwise. It has been a big asset to our future growth."

Now entering its third season in business, Texas Landscape Group is launching a sister company this spring. "We are in the process of hiring one of the top irrigators in the country to oversee the development of this company," Sebesta points out. She knows a thing or two about irrigation as well. Before working for TruGreen Landcare, Sebesta had her own irrigation and landscape lighting company. She is a licensed irrigator in the state of Texas.

This new sister company, however, will go beyond just landscape irrigation in the traditional sense. It will be a "water management" company. "We will be able to diagnose a current irrigation system and offer a cost-saving, and more importantly, water-saving plan to customers through a 'smart' water management system," Sebesta explains. "This will be a completely separate company—but it will then outsource any irrigation system repairs to Texas Landscape Group.

"We feel strongly that 'water management' is crucial to the future of our country and all people," Sebesta continues. "Water is a finite resource. Soon 'smart' water management will be a government requirement in Texas, and we want to be part of that movement toward water conservation."