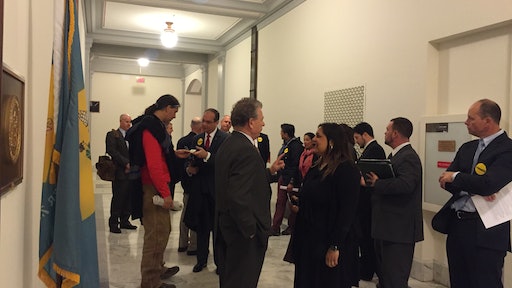 The NALP led an H-2B fly-in back in May in Washington, D.C.

The National Association of Landscape Professionals (NALP) is urging members to weigh in with their elected officials to ensure that Congress renews the H-2B returning worker exemption that is currently set to expire on September 30, 2016.

NALP points out that it is already working with the Department of Labor (DOL), the United States Citizenship & Immigration Services (USCIS) and Congress to ensure that the H2-B program works as intended next year. But there is strength in numbers, and individual landscape companies can help with some of this heavy lifting.

NALP is asking its members to call their elected officials and ask to speak with the staff member who handles H-2B issues. Tell them how important the program is to you and your business. Invite your colleagues and other users of the H-2B program to do the same thing. If you do not know the number(s) of your elected official(s), you can sll the Capitol Switchboard at (202) 225-3121 and ask.

You can also tweet your elected officials using #SaveH2B.

Again, there is strength in numbers. Encourage your employees, co-workers, suppliers, and other industry colleagues to reach out to their elected officials.

Why timing is critical. Prior to the August recess, the House Appropriations Committee passed its version of the fiscal 2017 Department of Homeland Appropriations bill, which would renew the H-2B returning worker exemption for another year. The Senate Appropriations Committee passed its version of the Department of Labor Appropriations bill that would extend the H-2B regulatory relief for another year and provide additional resources for H-2B processing. While Congress is not expected to complete work on these appropriations bills before the start of the fiscal year on October 1, it is expected to pass a stop-gap spending measure called a continuing resolution that will keep the federal government running. "It is essential that the continuing resolution extend the H-2B returning worker exemption beyond September 30," a NALP statement reads.

Landscape Professionals Take to the Hill on H-2B

Approximately 200 people from the H-2B Workforce Coalition, 30-40 of whom were landscape industry professionals, traveled to Capitol Hill in Washington, D.C. on May 18 as part of a coordinated H-2B fly-in. The National Association of Landscape Professionals (NALP) helped to coordinate the effort.

According to a statement from NALP, the H-2B seasonal guest worker program is once again under attack, this time from Senator Jeff Sessions (R-AL), a chief supporter of Donald Trump.

NALP is encouraging landscape professionals who value the H-2B program to call their state's senators and house representatives and advocate for the following:

You can find the twitter address for your Senators and Representative at the links below:

How to Thank Your Employees and Customers

What Will the Landscape Company of the Future Look Like?