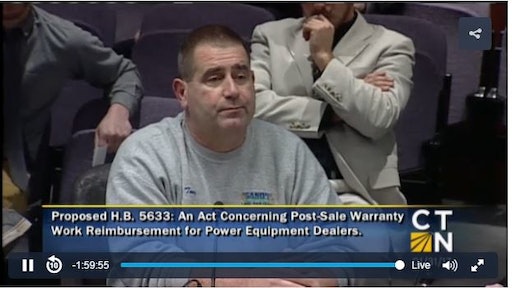 Second-generation dealer Tony Gargano, manager of Gano’s Power Equipment in Colchester, CT, testified on January 31 to the Connecticut General Assembly as to why outdoor power equipment servicing dealers should be better reimbursed for the warranty work they do on behalf of the manufacturers they represent.

Gargano, who was joined by Tim Wentz from the Northeast Equipment Dealers Association (NEDA), was asked to testify as the Assembly took up proposed House Bill 5633, “An act concerning post-sale warranty work reimbursements for power equipment dealers.” The bill was proposed by Linda Orange, a state representative.

HB 5633 requests that the general statues be amended to require suppliers of power equipment containing wheels and transmissions, including, but not limited to, lawnmowers, to reimburse retail dealers of such equipment the full retail cost for parts and such dealer's posted shop labor rate for post-sale warranty repairs to such equipment. Text of the proposed bill also states that these warranty reimbursement stipulations are already granted to automobile dealers.

Gargano pointed out that, presently, manufacturers determine the repair times. Furthermore, those repair times fail to take into consideration the significant amount of time dealership personnel must spend on diagnostics, administration and customer service. “We’re only paid for the time it actually takes to physically repair the piece of equipment,” Gargano said. “That is leaving a lot of money on the table.” Gargano estimates it to be in the tens of thousands of dollars per year.

Wentz added that, in many instances, an end customer bought the warranted piece of equipment from another retailer, perhaps online or from a big box store. Sometimes the end-customer even buys the equipment from another dealer that does not have the staff, training or tools to adequately service equipment. Then, well-intentioned dealers like Gargano are there to handle warranty claims, and they are on the hook because they are not properly compensated.

Carlo Leone, a Connecticut state senator, questioned how this bill could ultimately impact a manufacturer’s thinking. For instance, if a manufacturer would be faced with having to pay dealers a considerably higher warranty rate, might that manufacturer decide to quit doing business in the state of Connecticut?

Wentz pointed to recent legislation in the nearby states of Vermont and New Hampshire which also provide for warranty reimbursement protections for power equipment dealers. “No manufacturers have up and pulled out of those states,” Wentz said. “So the fact is, dealers should not have to subsidize the sale of a manufacturer’s equipment.”

Representative Daniel Rovero wondered if all equipment and engine manufacturers paid the same warranty rates. “No, they don’t,” Gargano answered. “And with few exceptions, most do not pay for diagnostic times.”

Wentz pointed out that some manufacturers are now promoting extended warranty periods, sometimes as long as five or six years.

Representative Linda Orange, who introduced this bill, told a story of how she bought a leaf blower from Gano’s Power Equipment—also purchasing a case of a special kind of engine oil that added another two years onto her warranty. “Now I’m on the hook for another couple of years,” Gargano said with a chuckle.

Senator Tim Larson wondered if, by being a warranty service center, a dealer might look at warranty repair as a “loss leader” in order to get customers into their stores so they can sell them other products. “A dealer has to perform warranty repairs; we must agree to that in our dealer agreement in order to also be able to sell the product,” Gargano explained. “Even on that special oil that adds another two years onto a warranty, I make about 20% on that $13 or $14 case of oil.” To those who don’t like math, that’s a whopping $2.80.

Senator Kevin Witkos asked if higher warranty reimbursements could lead to higher equipment prices in a given state. “I don’t think so,” Wentz said. With the internet, it’s easy to find out how much a piece of equipment is selling for at dealerships in neighboring states. This encourages manufacturers to keep pricing relatively uniform, at least throughout a given region like the Northeast. One concern is that manufacturers could charge dealers in a given state a higher wholesale price, forcing dealers to either raise their retail price or eat some margin.

As the hearing concluded, Orange asked Wentz to provide the committee with copies of the recent laws that passed in Vermont, New Hampshire and Maine, so the committee can further study this issue and determine how to move forward.

Check back for updates as this story unfolds.

Laying Down the Law

Hidden Costs in Your Service Department