Ontario contractor is all battery, all the time – and both his customers and bottom line are thanking him for it. 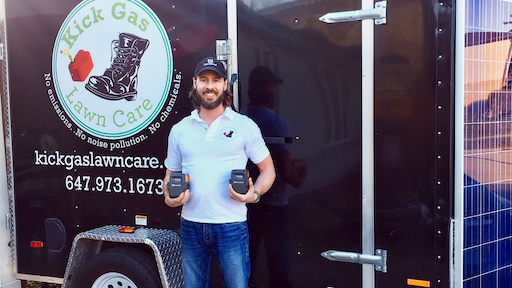 Demian Trudeau was earning a living as a member of a school board when an idea for a new business started to fester. “I was around children and younger parents a lot,” Trudeau says. “I remember driving around seeing people doing their lawn work, smelling the exhaust fumes and hearing the noise coming from the equipment. I knew there was both electric and battery-powered equipment that was available, and was just curious why more professional contractors weren’t using it. It seemed like a really good opportunity.”

The idea for a gas-less lawn business continued to gnaw at Trudeau for a couple of years. “My wife kept talking me out of it because I had a good job with a good pension and benefits,” he says. Eventually, though, Trudeau secured his wife’s blessing and decided to go for it.

Trudeau is the owner of Kick Gas Lawn Care in Mississauga, Ontario, Canada. This will be his fourth year in business. The first year presented quite a learning curve. Lithium ion battery technology was nowhere near where it is today. Trudeau, through a lot of trial and error, had to figure out which equipment was best up to the task. He also had to develop systems for keeping batteries adequately charged. It has all been a work in progress. This year, though, Trudeau feels like his company is on the verge of becoming a well-oiled machine—minus the oil, of course, because battery-powered equipment doesn’t require it.

Kick Gas Lawn Care is using Husqvarna battery-powered equipment almost exclusively, from hedgetrimmers and string trimmers to chainsaws, pole saws and leaf blowers. “Right now I’m also using a 58-volt push mower from Echo,” Trudeau says, while adding that he has learned to not get too jazzed up about volts, which many manufacturers like to tout as a measure of battery performance.

“One company, Greenworks, likes to promote its 80-volt battery,” Trudeau shares. “But 80 volts is kind of overkill. What really matters is the amp-hours, which speaks to run time. Right now I’m primarily using 4.2-amp-hour batteries from Husqvarna, which gives me solid run time.”

Voltage still matters to a degree, Trudeau adds. Husqvarna’s battery, for example, is rated at 36 volts, which Trudeau says is more than adequate.

One of the benefits of battery power is the fact that operators can use the same battery on several pieces of equipment. Trudeau has learned a lot about this, too, during his three years in business.

“I like to keep all of my batteries as close to fully charged as possible,” Trudeau explains. “So I’ll use a battery on a couple of properties, and then switch it out with one that just came off the charger fully charged. I never completely kill a battery. I want fully charged batteries in use while the others are charging back to 100%.” That said, Trudeau does point out that this is really a matter of personal preference, as lithium ion batteries do not have a memory effect.

Trudeau has six batteries and six chargers. He also has a backpack battery which is the equivalent of six or seven regular batteries, which provides all-day performance with no headaches on large properties.

“I knew right off the bat that I was going to need a system for bringing power on the go,” Trudeau tells. “So I’d designed a special trailer with solar panels. At first I simply had two panels on the top of the enclosed trailer. Then I got to thinking about how I could make a bigger impression on people who saw my trailer around town. So I’ve added two more panels to the front.”

The 6x10 trailer now has four 250-watt solar panels, along with a 10,000-watt sine inverter connected to deep-cycle batteries. “Then I just run my battery chargers off of a power inverter,” Trudeau explains. “So basically, the sun is charging the deep-cycle batteries which, in turn, charge the batteries used to power my equipment.”

A fancy rig like this does cost money, as do the batteries and chargers you need to power your equipment. Trudeau says his upfront investments showed a fairly quick ROI, though.

“I don’t have to buy gas and gas cans, oil or filters,” he says. “Another thing I’ve noticed is when I stop at Tim Horton’s for coffee in the morning. It’s right next to a gas station. I see one landscape company after another pulling in to fill up gas can after gas can. They’re filling up cans for 20 minutes or longer sometimes. That’s a lot of money when you’re paying employees to do that. That’s something I don’t have to worry about, which is great because my company is growing.”

Trudeau employed five part-time employees last season. This year he hopes to add a couple more. “We’ve been realizing about 30% growth in customers and profits every year,” he adds.

Trudeau is hoping that some of those customers will show interest in a new service he’s going to begin testing this year: robotic mowing. He’s looking to finance a couple of Husqvarna Automowers and offer customers two options: 24/7 mowing, or shared use with a series of other homes. “With the second option, I would just establish a route for the Automower, and then stay on top of moving it from one property to the next.”

Regardless of which option is chosen, Automower customers must share one commonality: Their property must have some kind of passage from the front yard to the back—or they must be willing to make some modifications.

“I’m just going to offer this service and see who seems receptive,” Trudeau says. “There are certain consumers who really love technology and will probably be more interested. But when you get down to it, everybody needs their lawn mowed—whether there’s a person operating the mower or not. These Automowers are not cheap. Still, I think I’ll be able to offer the service at a very competitive price. It will be a premium service, but the customer is getting service every day as opposed to just once a week.”

This summer we’re offering our award-winning gps tracking system with no up-front cost, starting at just $8.75 /month on a 12-month contract. Find out more.
July 7, 2020
Latest

How to stop being the bottleneck in your landscape company and get your employees to help systemize your essential business operations.
Steven Cohen
June 12, 2020
Follow Us