Battle of the Batteries

Impressive voltage may make marketers feel all tingly, but that’s just one factor end-users should consider when shopping for battery-powered lawn equipment. 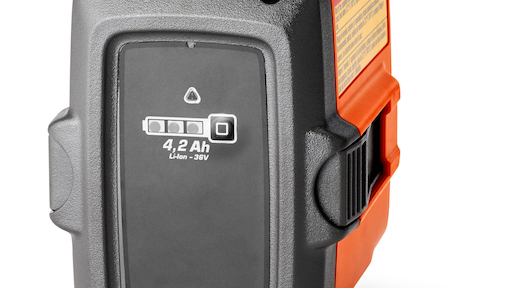 Ah x V = Wh, the vital spec that tells you how much power the battery can discharge and for how long. Pictured is Husqvarna's BLi20 battery.

There is no mistaking the convenience of battery-powered lawn equipment. Convenience is a big reason why shipments of “electric-powered outdoor power equipment” grew by 10% last year, according to Outdoor Power Equipment Institute (OPEI) market statistics.

There are a number of things driving growth in the battery category. “For some, battery power represents an opportunity for a more environmentally friendly tool,” says Ross Hawley, senior marketing manager at The Toro Company. “For some, there is just a genuine interest in technology. For most, we believe, people are migrating to battery-powered tools because it maintains tool portability but eliminates the hassles associated with engines (fuel, ethanol, oil, air filters, spark plugs, etc.). Electric units also simplify starting and start the first time, every time.”

Those benefits resonate not only with everyday consumers, but also professional users. Still, many pros view this product category skeptically, as they do most new technologies and overall approaches to doing business. They have questions, and don’t want to find out that the answers don’t suit them in the middle of the season.

“Battery-powered outdoor power equipment that could be considered for professional use is a more recent development,” Hawley adds. “Much of the battery cell development is actually being driven by demand for electric vehicles both in the U.S. and abroad. We expect commercial users to embrace battery power as it develops to the right combination of performance, durability, weight and run time to meet professionals’ needs.”

Some manufacturers have already grown comfortable in promoting certain battery-powered models as being “on par” with their gas-powered equivalents—and definitely up to the commercial task. That comfort level is reinforced by key performance specs such as mph on a leaf blower or strokes per minute on a hedgetrimmer.

The number don’t lie – at least not always

When it comes to batteries, voltage seems to be the sexy spec. But it is only one part of a more critical equation. The watt-hours spec determines actual power output over a given amount of time.

Wayne Hart, communications manager for Makita U.S.A., explains: “Consider voltage as the size of a car’s gas tank. Ampere-hours, Ah, is the amount of gas in that tank. Watt-hours, Wh, is the distance you can drive your car over the course of an hour, or how fast you can cover that distance.”

If a manufacturer does not disclose its watt-hour spec, you can calculate it yourself by taking voltage x amp-hours (V x Ah). But we’re still not done. One must also consider how the manufacturer is promoting voltage.

For instance, Snapper’s new XD 82V Max battery is just that: 82V. However, the company adds a footnote saying that 82 is the maximum initial battery voltage (measured without workload). Thus, unless you want to use the battery as a paperweight, that 82 mark is pretty much irrelevant. The nominal (working) voltage is 72. That’s what matters. In this case, Wh on a 2 Ah battery swings from 164 down to 144 (82V x 2 Ah vs. 72V x 2 Ah).

NOTE: Several other manufacturers also tend to promote “max” voltage. Be on the lookout for that when comparing product—and be sure to hone in on the really important spec, which is Wh.

That’s one reason why you see so many 18V and 36V batteries out there. When you see random voltage ratings like 20 or 58, for instance, ask the dealer or manufacturer why they opted for that voltage. Regardless, ask if the voltage rating is maximum or nominal.

“For any battery, what’s important is how much power it can discharge and for how long,” reminds Kevin Guerville, global product line manager for outdoor power equipment for Oregon. “This is called ‘work’ and is measured in watt-hours (Wh). All batteries have the Wh shown on the case. It’s important to look at how a given manufacturer gets there—because the watt-hour rating of a battery is simply the nominal voltage (V) multiplied by the ampere-hour rating (Ah). A lower-voltage battery with a higher Ah rating could actually produce more Wh than a higher-voltage battery with a lower Ah. Wh is the only measure of how much work you can do with a battery-tool combination.”

“When you look at the watt-hours on some of these really high-voltage batteries, it’s really not much higher than many other smaller-voltage batteries that are out there,” adds Brian Manke, Stihl’s product manager for battery. “There is also one big problem with a high-voltage platform: There’s no getting around the number of cells needed to get to that voltage—and that adds weight.

“The problem arises in a low-amperage application,” Manke continues. “Take hedgetrimming, for instance. Look at something from Stihl’s consumer line, the HSA 56, which comes with a fairly small 50 Wh battery. But it will run for 40 minutes straight on a charge, which is really good. This battery weighs just 1.8 pounds, which is what you want for something like a hedgetrimmer. Weight is key.”

In other words, think about the tools you’ll be using and in what applications. Just like a gas-powered engine, you want a battery that is right-sized for what you’re needing to do, helping you to maximize the power-to-weight ratio.

Just like with any piece of equipment, it’s important to understand total operating costs. With battery-powered equipment, voltage, amp-hours and watt-hours help paint a picture of equipment performance and the effect on your productivity.

Another good thing to think about is charge time, especially relative to run time. Run time will vary by tool and working conditions, but your dealer or the manufacturer should be able to give you a general idea of what to expect. “The real key here is that once your overall working time is at least an hour, that’s more than enough time to charge a second battery,” Manke explains. That eliminates downtime, which is always a key for contractors.

You’ll also want to investigate things like power drop-off, memory effect and typical battery lifespan, along with the number of times a battery can be charged before it starts to fail.

As Stihl’s Manke points out, “It’s important to look at the whole package: the battery in conjunction with the motor and the tool being used, along with the ergonomics and overall engineering. It’s not simply a matter of how big the battery is.”

That’s for sure. It’s a matter of how well the tool is going to perform—and how much it can help add to your bottom line.”

Check out our battery-comparison chart

Powering Your Equipment with Lightning