Lover of Dogs – and Trees

Jonathan Stewart had an idea, and it's blossomed into a unique product and new company called Dawg Tree LLC. 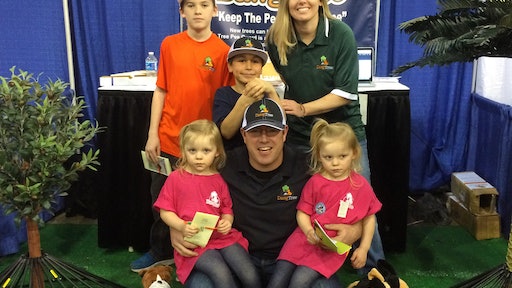 Jonathan Stewart with wife Andrea and children at the Super Pet Expo this past March.

Stewart started his company, Dawg Tree LLC, in March. The company's flagship product, the Dawg Tree Pee Guard, forces a dog to plant its leg away from the base of a tree before marking its territory—providing 360° protection for newly planted and established young trees. The cone-shaped device, made of sturdy plastic rods that are 20 inches long, secures around a tree with a weatherproof bungee that allows for tree growth. Stewart says it will work with any tree up to 17 inches in circumference.

"When I got this idea, as a homeowner with my own dogs, I couldn't believe that nothing like it existed," Stewart shares. "Aside from chemical sprays to protect trees from dog urine, or maybe building a little fence around a tree to keep dogs at bay, nothing seemed to work. I got my idea when I'd cut up a bunch of branches and built a kind of briar patch around one of the trees in my yard. It looked terrible, but it worked. Then I realized, why don't I manufacture something that did the same thing?"

Stewart experimented using metal, wood and fiberglass. He finally discovered that plastic worked the best. He spent the following six months laying the legal groundwork for his invention. "I now have a utility patent pending on it," Stewart points out.

Thus far, Stewart is exclusively selling the product on his website. He's had investors approach him, and has mulled over the idea of partnering with a big retailer. Right now, though, he doesn't want to over-extend. "I haven't taken one bank loan, and I'm 100% owner," Stewart adds. That said, finding retail distribution—especially through partnerships with smaller retailers such as independent lawn and garden dealers—is something he's interested in exploring.

"I basically see two primary markets for this product: the pet industry and the horticulture industry," Stewart explains. "My big goal is to land city, state and federal contracts for public landscaped areas, dog parks and rest stops. I also see landscape contractors and tree care professionals as having a real need for a product like this."

On that note, Dawg Tree LLC has recently become a member of the Tree Care Industry Association (TCIA) and will be exhibiting at its annual show this November in Pittsburgh. Dawg Tree also had a booth at the Capitol Pet Expo in May, and made its big debut at the Super Pet Expo in March.

"The response I got at the Super Pet Expo was amazing," Stewart shares. "The response I've gotten from TCIA members and other horticulture professionals has also been really encouraging. It's given me the confidence that I might really be onto something."

Stewart very well could be. Those looking to cost-effectively protect young trees from the potentially damaging effects of acidic canine urine could benefit from a product like this. Right now, Stewart is focused on consumer education, which is right up his alley as a professor of criminal justice at American Military University.

Dogs are right up Stewart's alley, as well. He was a canine handler for the Secret Service's Emergency Response Team for nearly a decade. He loves dogs and understands that they have to do their business from time to time. Now he's making it his business to help protect valuable trees in the process.