The majority of Houzz users renovated their yards, and between different age groups importance of outdoor renovation was similarly popular. 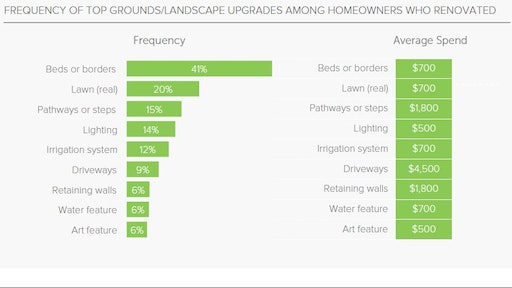 The graph shows the most common projects that home renovators took on in 2014 and the average money that was spent. Note that the average spend includes both major and minor projects and those who hired a pro and DIY to complete all or part of their project.
2015 Houzz & Home Report

The 2014 fourth annual Houzz & Home survey found that three out of five homeowners made upgrades to their yards and outdoor structures. The report also found that despite an age gap, (between ages 25-34 and ages 55+) millennial homeowners were just as likely to renovate their homes as other age groups. The survey included 260,000 respondents globally, with three-quarters (170,000+) of the respondents in the U.S.

More than half of Houzz users (62%) made outdoor renovations which includes making upgrades to the ground and outdoor systems as well as updating outdoor structures. While only one in 10 homeowners on Houzz is 25-34, relatively the popularity and spending was similar to that of baby boomers.

The most popular outdoor renovations were landscaping of garden beds or borders which was tackled by two in five homeowners. One in five upgraded their natural lawn, and one in 10 upgraded their irrigation system.

The survey also discovered that, not only is there a bridge between ages, the popularity of outdoor projects is also consistent across income levels.

Projected in the year 2015 more than half of Houzz users plan to continue renovating or to tackle new renovations, with four in five users looking to hire professionals.

Below the Surface—Renewing Tired Lawns

Creative Ways to Work With a Sloped Lot