Once competitors but now partners, John Creasey and Michael Phillips are focused on building a profitable, high-end design/build company that favors quality over quantity. 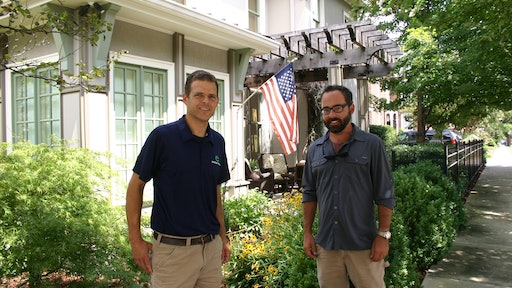 John Creasey and Michael Phillips were friendly competitors for 10-plus years in Chattanooga, TN. Their landscaping companies, Creasey Horticultural (founded 1998) and Fiddleheads Native Landscaping (2001), were actually a lot alike—from the services provided and parts of town they typically worked in, to the high standards their employees were held to. Creasey and Phillips also shared a mutual respect for one another, each having graduated from the University of Tennessee with degrees in ornamental horticulture and landscape design.

Like many landscape contractors across the country, both Creasey and Phillips rode the housing bubble, each cruising toward that million-dollar mark. Then 2009 happened. Each company saw its sales sliced nearly in half. The following year wasn't much better. The two started talking about the possibility of merging toward the end of 2011.

Creasey and Phillips had actually been collaborating for a few years before that. Creasey's maintenance division had grown beyond his desires. In hopes of keeping his focus on design/build while letting some of his maintenance customers down easy, Creasey needed a reputable contractor to pass some maintenance work along to. He immediately looked to Phillips. "I'd always been a little bit heavier into maintenance with my company, even though I also did a lot of design and installation," Phillips points out.

In 2011, with the economic recovery lacking the vitality many had hoped for, Creasey and Phillips started talking about taking their professional cooperation to another level. "I called John (Creasey)," Phillips recalls. "We each had a vision of how our companies could grow as this area grew and the economy came back. We talked about what that growth might look like and how much further we might be along in a certain number of years—if our companies joined together."

The more the two talked, the more joining forces seemed to make sense. Creasey Horticultural and Fiddleheads Native Landscaping began operating as a joint venture in 2012. Once all of the paperwork was in order, they officially merged in mid-2013.

"The merging process was by no means a nightmare, but was a little drawn out because we wanted to make sure everything was 'crossed off the list,' so to speak," Creasey says. "It actually seemed fairly easy, but just took time; merging two companies is not going to happen overnight," Phillips adds. "That's why we operated as a joint venture for a year; doing so gave us time to really think things over and make sure every little detail was in place."

One such detail was defining the roles Creasey and Phillips would assume once they were partners. "We talked about our strengths and weaknesses, and what we liked doing," Creasey tells. "The more you can outline this type of thing going in, and really think through how things are going to operate on a daily basis, the fewer surprises there are going to be."

On that note, it was decided that Creasey would oversee operations while Phillips, whose college minor is in business, would handle the financial side of the company. The two would jointly spearhead the sales effort.

The new company, Phillips|Creasey, would operate out of Phillips' facility, primarily due to its high-visibility location and adjacency to a gas station. All employees were retained and melded together quite well. "It was a very smooth transition with our customers too," Phillips adds. "It wasn't like I went away and he took over, or vice versa. The fact that both John and I were still here made a big difference."

The art of the tweak

The company has grown roughly 20% in each of the past two years. They now employ 13-15 during peak season, which includes an office manager, an operations manager, and an equipment mechanic who splits his time making deliveries to jobsites.

With the way things are booming in Chattanooga, which was recently named "America's Best Town Ever" by the readers of Outside magazine, everything is shaping up exactly as Creasey and Phillips had hoped it would. Nonetheless, these business owners are in search of constant improvement.

On the operations side, Creasey is always tweaking things. "You have to identify those repeated patterns that cost you time and money, and then put systems in place to remove those patterns," Creasey says. "That's what we're constantly trying to do."

For example, each crew now has its own color-coded everyday tool set that it is responsible for. Then, with other tools and equipment that aren't used every single day, it's as if the crew is renting something from a rental store. "They have to check it in and out, and do a damage assessment," Creasey tells. "By doing these types of things, once they get in practice, morale gets so much better because everything is organized, you operate more smoothly, and these little frictions don't constantly come up between crews."

On the financial side, Phillips looks for smart investment opportunities, such as the diesel fuel tank he's had installed in the back of the shop. Even though they're located right next to a gas station, that gas station does not offer diesel fuel. So crews often spent quite a bit of time driving around to gas stations that did offer diesel. Once Phillips put pencil to paper, he was able to determine that putting in an on-site diesel tank would pay for itself in short order, which it has.

Phillips is also constantly analyzing P&L's—project by project—especially when it comes to maintenance. "I've been looking at how long our crews have been spending on properties, if we're profitable on those properties, and if we might need to think about raising our price or even dropping certain accounts," Phillips explains.

Always part of the right conversations

Phillips|Creasey is not the biggest landscape company in Chattanooga, but that doesn't matter. "Our focus is on high quality and high service," Creasey says. "We try to offer a premium service, and therefore get a premium rate. That's our business model. We're certainly not against growth, but massive volume is not our focus."

Prospective clientele seem to be taking notice. "When a landscape architect's client asks for the top three landscape companies that could do the project, we seem to always be on that list," Creasey cites as an example. "We're always part of the conversation, and that's all we've ever really asked for."

Roughly 80% of Phillips|Creasey's revenue comes from design/build, with the remaining 20% coming from high-end residential maintenance, which includes fertilizing and pesticide application as part of an overall landscape management program. The company doesn't get involved with commercial maintenance. However, more commercial installation work is presenting itself as the revitalization of downtown Chattanooga, breathtakingly nestled between various mountains and along the Tennessee River, continues to ramp up.

That ramped-up revitalization is a big reason why Phillips decided to earn his general contracting license earlier this year. Considerable time was invested in taking a prep course and studying for the eventual four-hour exam. It's already proving to have been well worth it. "There's a lot of work out there—projects with bigger retaining walls or more expansive outdoor living spaces, for example—that we can do now," Phillips says. "There are definitely doors opening now that wouldn't have."

Phillips|Creasey can also oversee new construction and remodeling projects. Creasey explains, "This all really started by taking some cues from our existing customer base. We were doing pretty involved landscaping projects. We'd notice, in some cases, that the client may have had a bad experience with a general contractor. The client wanted a high value to their project management, and we already had a built-in trust. So we saw an opportunity where we could bridge that gap and be more than just their landscape contractor."

"Landscaping is still our focus," Phillips points out. "But we're making sure our landscaping clients know what else we can do for them. If we have to pull a permit to put in a driveway, for example, we can do that now."

Lessons from the past

Truth be told, neither Phillips nor Creasey thought things would turn out as they have when they started their companies more than a decade ago. "We were both young guys who had growing companies, and growing was what really mattered," Phillips says. "But I'll tell you, I learned more about business and running a company during the recession than I ever did in college minoring in business."

With those painful, recessionary days behind them, Phillips and Creasey are now partners in a company that's focused on quality and service as opposed to just volume. That's how things have turned out—and they couldn't be happier.

With respect to the company's biggest opportunity going forward, Creasey says, "We just want to have a certain identity as a company; a high-value, high-quality company. More people are having architects design their houses around here, and then hiring high-end builders and wanting to pay a premium for a high level of service. We want to be in the mix when people are looking for that high-quality company."

With respect to the company's biggest challenges, Phillips adds, "You have to resist the urge to grow into something you're not. We have all of our systems in place and have a great team. As long as we focus on being efficient and profitable, we'll be OK. I think our biggest challenge could be trying to expand too quickly—at the expense of quality and profitability. We just need to stay focused on our business model."

Creasey and Phillips each say they'd learned some valuable lessons from the recent recession. One might question if putting such emphasis on design/build again is a bit risky. Phillips says it could be, but not for them. "We have maintenance equipment that is bought and paid for sitting in storage should we need it. Right now our focus is design/build, and the work is there. But if the market changes again and we have to ramp up our maintenance business, we'll be ready."