E-Verify is now mandatory in 19 states, and that number could grow as the spotlight on legal labor intensifies over the next year. Are landscape companies prepared? 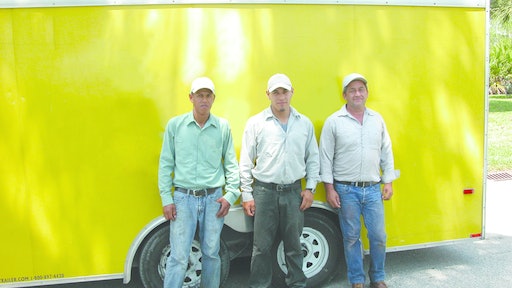 11/22/2016 - Well it's a reality: Donald Trump is going to be the next president. Immigration reform is high on his agenda, which would include the "turning off of the jobs magnet" for illegal immigrants.

Check out the below story we published a little over a year ago when Trump started to emerge as the Republican frontrunner. It talks about the E-Verify program and how small business owners can use it to guard against the hiring of illegal workers.

10/1/2015 - Another election cycle is in full swing, which means topics like immigration reform and job creation are front and center once again. Those two topics are generally viewed as interrelated, as well. In other words, illegal immigrants take jobs away from U.S.-born workers. Now, whether or not all of those jobs are jobs that U.S.-born workers are willing to take is open for another debate. But here are some facts:

In other words, the landscaping industry seems to be a magnet for both Hispanic and illegal immigrant workers. And for a variety of reasons—including being so hard up for employees—many landscape company owners end up hiring illegal workers, either knowingly or otherwise (that’s a separate discussion too). Regardless, the reality for landscape companies is that there is an intensified spotlight on this issue for the next year.

Protecting yourself with E-Verify

Some landscape companies are taking extra measures to ensure that they are hiring legal workers. They are using E-Verify, and internet-based system that compares information from an employee's Form I-9 (Employment Eligibility Verification) to data from U.S. Department of Homeland Security and Social Security Administration records to confirm employment eligibility.

A voluntary program in most states, E-Verify has been getting considerably more media attention as of late. Republican presidential hopeful Donald Trump, as part of his controversial immigration plan, calls for the mandatory use of E-Verify in all 50 states. At this point, 19 states have enacted legislation mandating the use of E-Verify: Alabama, Arizona, Colorado, Florida, Georgia, Idaho, Indiana, Louisiana, Minnesota, Mississippi, Missouri, Nebraska, North Carolina, Oklahoma, Pennsylvania, South Carolina, Tennessee, Utah and Virginia.

The United States Citizenship & Immigration Services (USCIS) says that around half a million businesses use the program. Some, naturally, are landscaping companies. For instance, the industry’s largest landscaping company, Brickman Group (now called BrightView), states on its website: “We are proud to be voluntarily enrolled in E-Verify in all states in which we operate.”

E-Verify is also being used by the more typical landscaping company—one with 50 or fewer employees—to varying degrees of success and satisfaction. As one contractor in Arizona, who spoke to us anonymously, said, “I can't really say I am a fan, and part of that is because it is forced on us by Arizona law. But also, it is unreliable. I have had employees who are accepted, but I didn't feel good about hiring them because everything seemed suspect. On the other hand, I have had natural-born citizens get rejected, and have to go through a process before acceptance. If state ID's were given along with a designation on a driver’s license, I would feel that the government was doing its job and I didn't have to do it for them.”

In Kentucky, where E-Verify is still voluntary, contractor Roscoe Klausing has been using the program for the past year or so. “We see it coming down the pike, and it’s not coming down in such a way that it’s just going to be landscapers fighting for landscape laborers,” says Klausing, who is the president and CEO of Klausing Group, a landscape, irrigation and snow management services company with offices in Lexington and Louisville. “The entire service and retail industries will eventually be fighting for the same legally documented workforce. So we thought it was best to get out in front of it.”

To that end, Klausing does not regret his proactive utilization of E-Verify. In fact, it’s giving him one more unique selling point when talking to clients. Still, it’s been a bit of a hardship. “In the short-term, it stinks,” Klausing relates. “It’s slowing us down and putting us at a competitive disadvantage. We went from a 50% Hispanic workforce to about 5%, and our turnover has been much, much worse. But it’s the best way for us to be compliant. And hopefully, the competitive disadvantage is just temporary.”

That would definitely be the case if and when E-Verify becomes mandatory in the state of Kentucky. In the meantime, Klausing and his team are making the most of it. They’ve put processes in place so that, on average, they know if a new hire is E-Verified in roughly five minutes. That’s important because companies are required to hire and begin paying a new employee before running the new hire’s information through E-Verify. That’s designed to protect employees and guard against discrimination. “We offer the applicant a job, they accept, we clock them in and start filling in their I-9 Form,” Klausing explains. “Then we run the I-9 through E-Verify to see if the employee is authorized.”

Klausing echoes what the contractor in Arizona had said. Sometimes, often due to clerical errors like name mis-spellings, an authorized employee actually gets rejected. In those instances, you have eight "federal government workdays" to try and get the clerical error straightened out. But again, much of the onus is on the employer. That hardly seems right, many would argue. After all, if the federal government has failed to properly secure our borders and overall deal with the issue of illegal immigration, why should employers be responsible for determining who is and isn’t authorized to work for them?

“Overall I think E-Verify is a good tool, but I don’t like the responsibility being shoved onto the employer,” Klausing says. “I can also see how some employers can abuse it, using it as a way to make sure immigrants are legal to work for them before they actually hire them. But that’s discrimination. So we’re trying to do the right thing and use E-Verify the right way, even though it’s slowing us down and making things harder for us.”

1. Complete I-9 form with employee

2. Punch that same info into E-Verify

3. E-Verify compares the information to records available to the U.S. Department of Homeland Security, including:

E-Verify sometimes displays a photo for the employer to compare to the photo on the employee’s document to ensure the document photo has not been altered.

If the information matches, the case will receive an Employment Authorized result almost immediately.

If the information does not match, the case will receive a Tentative Non-confirmation result.

How companies/employers can enroll

When you enroll your company in E-Verify, you need to provide some basic information about your company and agree to the rules of the program. During the enrollment process, you will:

Grow Your Bench with GrowTheBench.com