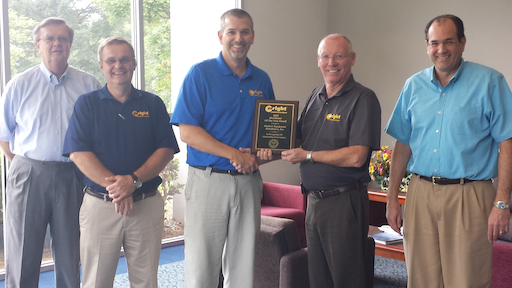 Outdoor Equipment Distributors, Inc. (OED) has been named 2015 Distributor of the Year by Wright Manufacturing. The award recognizes OED’s outstanding performance as a distributor of Wright’s full line of commercial lawn mowers and accessories.

Established in 1931 as Raleigh Auto Supply, OED is in its third-generation of family-ownership. It became Outdoor Equipment Distributors in 1969 and has distributed Wright products for 20 years. The distributorship serves more than 500 independent dealers in seven states – North Carolina, South Carolina, Tennessee, Virginia, West Virginia, Maryland, Delaware and the District of Columbia.

Wright Manufacturing invented the stand-on mower in 1997 and now has expanded the line to also include commercial walk behinds and mid-mount zero turn mowers. The name of a local dealer can be obtained by visiting www.wrightmfg.com or calling 301.360.9810. Wright Manufacturing is headquartered at 4600X Wedgewood Blvd, Frederick, MD 21703.