Musings from the republican debates, and the distorted discussion over the H-2B seasonal guest worker program. 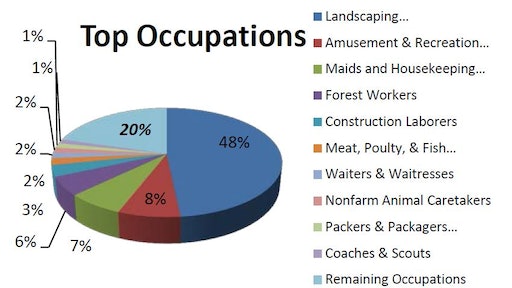 I was half-watching the March 3 republican debate when I'd overheard a potentially interesting conversation begin to emerge from the shouting and non-stop idiocy. It was about the hiring of temporary foreign guest workers, primarily via the H-1B program for skilled specialty occupations such as aeronautical engineering. The H-2B program for lower-skilled workers, which has proven to be a vital employment tool for hundreds of landscape companies, was also invoked by one of the candidates.

H-2B seasonal guest workers appear to be needed on a fairly even basis across the country. Nearly half of the visas are spread out across more than 3/4 of the states, with no one state's companies obtaining more than 2% of the visas. Ten states each utilize between 3% and 6%. One of those states is Florida (5%), which is interesting because that's where Marco Rubio is from. Texas companies are by far the biggest users of the program (17%), which is interesting because that is where Ted Cruz is from. So when they hammer one of their opponents for his use of this legal H-2B program, can we attribute it to confusion, ignorance or flat-out dishonesty? Well, both are lawyers/politicians, so it's probably a little bit of all of the above.

Our industry, thanks in large part to the National Association of Landscape Professionals, is helping to lead the charge against the confusion and ignorance some people have about the H-2B program. Sound, consistent messaging can help to make inroads here.

Case in point, a reader called me a year or so ago when I'd previously written about H-2B. He said, "I don't agree with you. I think they all need to get thrown out of the country." He clearly doesn't quite understand what the H-2B program is. He's confusing legal guest workers with illegal immigrant workers who are working for cash and not paying taxes. He just needs to be presented with the right information.

On the other hand, when politicians are willing to suggest that the hiring of H-2B workers is synonymous with the hiring of illegal workers, as Ted Cruz did on March 3, that's a problem. It's even more troubling when they appear to be willing to do so for temporary political gain.

Landscaping has by far been the industry most in need of seasonal guest workers. That is not likely to change. Temporary relief came in the form of H-2B provisions attached to the federal government's omnibus spending bill this past December. However, a more permanent fix is going to be needed. For that to happen, politicians are going to have to stop playing games with this issue.

Hispanics Find Their Strong Voice in the Landscaping Industry