40 Years of Old-World Workmanship with a New Twist

It’s only natural that the second-generation owners of DeMelo Brothers Inc. continue to enhance the natural beauty of Cape Cod. 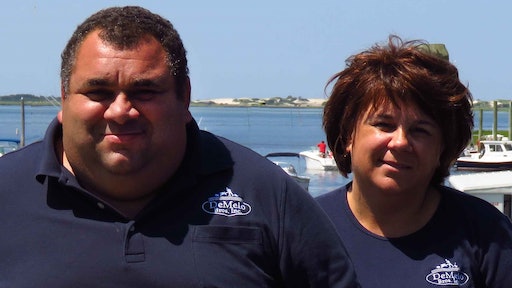 DeMelo Brothers Inc., nestled among the natural beauty of Cape Cod, is a family-run landscaping business located in Marstons Mills, Massachusetts. The 41-year-old company was founded in 1976 by Jose DeMelo, his brothers, Norbert and David DeMelo, and his brother-in-law, Angelo Medeiros. By the 1960s, the family all immigrated to the U.S. from São Miguel Island—also known as the Green Island—of Azores, Portugal to build a better life.

The family first found their calling working for a construction company—John Lebel Construction—and much of the work they did was in Cape Cod. At the time, the family resided in the city of New Bedford, Massachusetts, and commuted daily. As the commute began to take a toll, one by one, the family inched closer to work, which was a win-win as Jose DeMelo was reluctant to raise his children in the city. Recently hailing from the Green Island, the DeMelo and Medeiros brothers noticed there was a demand for landscaping services in the Cape Cod region, but a lack of supply. That’s when the brothers decided to form their own business closer to where they wanted to raise their families.

Jose DeMelo and his fellow DeMelo Brothers Inc. co-founders prided themselves on the old-world workmanship they brought from Portugal. Jose’s son, Rob DeMelo, and daughter, Lisa DeMelo Lamminen, who took over in 2001, now operate on the same principles of quality craftsmanship as their father and uncles. According to DeMelo, his father Jose “instilled that in everybody that worked for him, including me and my sister. It’s mainly, be honest with your customers, do an honest day’s work and get rewarded for it. Knowledge is important and that was also a key factor with him. He made sure we both were well-educated.”

Their father is still involved in the company, but the day-to-day grind is attended to by Rob DeMelo as president, and Lisa DeMelo Lamminen as vice president of customer relations and marketing. While the business is constantly evolving, the more things change, the more they stay the same with the new-generation co-owners. The siblings’ new motto is still old-world workmanship. The twist is that the old-world quality is now served up by modern-day equipment and techniques.

Especially as a family-run business, reputation is important for DeMelo Brothers. “I prefer quality over quantity. Yes, money is important, but my name is more important,” DeMelo says. “So is one-on-one contact with the people who run the company. I know every customer, I know every property, I know everything we do, I know everything that happens. I learned how to memorize what goes on where and how, so when somebody calls me, I can answer any question.”

DeMelo’s skill was not achieved overnight, however. “By the time I was 12, I was running my own crew. To this day, I can repair all the equipment for the most part. From lawn mowers to heavy machinery, I learned it all. Then I went to college. I have an associate’s degree from the Stockbridge School of Agriculture, a landscape architecture degree from the University of Massachusetts Amherst. I brought all that to the company.”

DeMelo Brothers offers a wide range of landscaping services. It wasn’t always the case, however. The company started with landscape maintenance, but over the years, its expertise grew more diverse. Construction was the next natural leap for the business as its reputation grew amongst the larger local contractors. Now the company operates with around 20 employees divvied up between specialized divisions, some of which were only added since DeMelo and Lamminen took the helm, including:

Some of this diversification of services grew out of DeMelo’s frustration with waiting for other contractors. Rather than having to depend on other experts, he educated himself on whatever topic arose. He elaborates, “We were getting a lot of calls with problems in lawns—diseases, insects, whatever the case may be—and [the fertilization contractor, for example] would take a few days to come out. People want instant gratification. Whether you’re fixing it or not, they want to see you there, talking to them and knowing that you are going to fix it. So, again, I educated myself and got my license. Now we can service customers usually the same day they call if there’s an issue.”

DeMelo and Lamminen agree that expanding their organic business is on the horizon because customers new and old are demanding it. They say the surrounding community is becoming ever more environmentally conscious. DeMelo and Lamminen have to forewarn customers who are leaning toward organic lawn care, however, that it is a process. Lamminen cautions, “The majority of people require instant gratification. They want it done yesterday. If you want organic, though, you’re going to have to be patient.”

Additionally, if fertilizer is ever banned, DeMelo Brothers can be ready for it in advance. “I’ve been saying for years, it’s going to happen. We don’t know when, but it’s going to happen,” says DeMelo. He thinks the media is overzealous when it attacks the landscaping contractor. “Whether it’s a fertilizer, herbicide or rodenticide, it doesn’t matter, homeowners think more is better when it’s not. I try hard to educate people that it’s not going to look the same, it doesn’t happen overnight and it takes about three to four seasons for organic to work because you’re virtually taking the turf off steroids. But nobody wants to hear it. It’s all about instant gratification.”

The company differentiates itself from the competition by not only employing organic products, but also doing all of its own recycling, composting and soil-making. DeMelo notes, “Soil-making benefits us and my customers because I can control what goes into the soil. I can custom-make it however I want it— whether I want a sandy soil, a rich soil or 100 percent organic soil. It all depends on what the situation may be. For example, sandy soil allows nutrients in the water to flow through easier and allows roots to grow deeper. When you have a real heavy soil, the roots aren’t going to penetrate.”

DeMelo Brothers works with customers on financing because Lamminen really strives to reach those customers who think they can’t have—or more accurately, can’t pay for—a nice yard. She says, “We’re very easy to work with. We offer payment plans ... I just want everybody to feel like they can have a nice landscape if they want one.”

When she’s not drumming up new customers, Lamminen is busy trying to determine how to not only best service regular customers, but also accommodate those who are potential customers. A particular family dwelling in a neighborhood in Kingston, Massachusetts, desperately sought DeMelo Brothers’ landscaping services. The problem was the residence was 40 minutes away, outside the typical purview of the company. Since Lamminen hated the thought of turning down a new customer, she brainstormed. Eventually, she reached out to a marketing company DeMelo Brothers uses to acquire a list and send out a mailing to the neighborhood.

“Now we have enough clientele that we’re able to service several properties in that area, making it more worth our while. Maybe next year we’ll run another marketing campaign ...” says Lamminen. DeMelo’s marketing campaigns typically offer an incentive, such as a free week’s worth of landscape maintenance if customers sign a one-year contract. If customers refer friends and they sign a one-year contract, they receive a free shrub. Lamminen is also a social media expert, conducting Facebook promotions for $25 gift cards to nice restaurants. “We’re trying to get 1,000 likes,” she explains.

As of press time, DeMelo Brothers is at 947 likes. It won’t be long now before the company crushes that goal and goes on to pursue many others in the name of old-world workmanship with a new-world twist.

Everything to Everyone: A Holistic Approach to Landscaping