The Right Tool for the Right Job at the Right Price 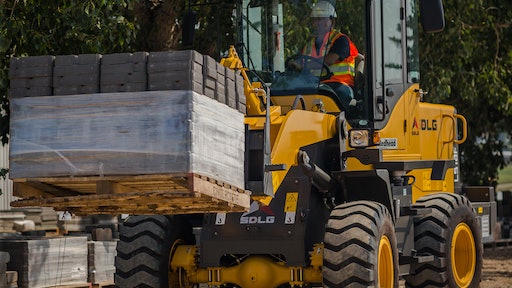 Budget-friendly compact wheel loaders can be a great solution for a variety of landscaping and snow removal applications, especially if you have a nursery or materials yard where a lot of loading and hauling takes place on a regular basis.

Whether it’s plants, pavers, mulch, fertilizer, etc., your job as a buyer is to find a product that helps maximize both customer satisfaction and profitability. That goes for the equipment you operate too. The ultimate goal is to get the job done as quickly, safely and cost-effectively as possible.

That is why a Chinese-based construction equipment manufacturer decided to brings its lineup of wheel loaders to North America in 2013. There is a large market of contractors and other users—including landscape contractors and nurseries—that could benefit from using a wheel loader, but have a tough time justifying the typical wheel loader price.

The company is Shandong Lingong Construction Machinery. Its “value” brand of loaders is simply marketed as SDLG. Four models are currently offered in North America: the larger LG958L/LG959 and L948F, and the smaller L938F and L918F.

The company itself was established in 1972. “They started out with wheel loaders,” says Nick Tullo, sales manager for SDLG North America. “The company has since expanded into seven different product lines and more than 200 models. Wheel loaders continue to represent the company’s main product. In fact, Shandong Lingong is the No. 1 wheel loader manufacturer by volume in the world. They have the ability to produce up to 40,000 wheel loaders in a year—which is almost inconceivable for some of our industrial footprints we’re used to seeing.”

Tullo says the SDLG loaders are no-frills and budget-friendly. For example, the L918F has a suggested retail price of $54,500. According to Tullo, that’s about 30 percent less than a comparably sized premium wheel loader. It’s also comparable to a value-branded skid-steer loader.

“The SDLG machine is de-spec’d to lower the cost,” Tullo says. “The main reason we introduced it in 2013 was because there was a position in the market that wasn’t being filled. Many of the premium construction equipment manufacturers were going in one direction with more features and more cost. On the other hand, the loaders offered by the value brands had matured so their costs increased. That left a void for users who just needed a good loader that met their budget and got the job done.”

SDLG engineers focused on a handful of key areas to pull cost out of the machine without sacrificing performance.

One is the axles. It’s a 4x4 machine with no differential locks. “That covers 95 percent of the applications someone would want a wheel loader for,” Tullo says. “The axles are also dry disc brake. Yes, that’s pre-1990 technology, but it brings the cost of the machine down by nearly $10,000. If you look at the type of customer who wants a budget-friendly machine, he is simply going to ask: Will the brakes stop the machine? Yes they will.”

Does old technology mean more maintenance more often? Not necessarily. As Tullo points out, the brake pads are $500 and need to be replaced every 500 hours or so. That’s $1 per hour. A wet disc brake system might last 10,000 hours, but having it serviced could cost upwards of $10,000. That’s also $1 an hour.

Additionally, replacing dry disc brake pads is much easier. That can be important if you have on-staff technicians or are inclined to do basic machine maintenance yourself. For landscape contractors who are using a wheel loader just two to four hours a day, one or two brake pad replacements per year are all that will typically be necessary.

Another area of cost reduction is the transmission. SDLG transmissions are manual two-speed power shift. “This means the customer can go between first and second gear by turning the shift lever on the steering column,” Tullo explains. “Better yet, they can achieve both direction control and gear shifting in the joystick used for the boom and bucket. For a landscape contractor, this is a great solution because it’s so simple. Simple operation results in increased efficiency. And at the lower price point, you’re talking about the potential for a much lower per-hour operating cost.”

This is why SDLG engineers focused so much attention on bottom-line performance and ease of operation. The L918F, SDLG’s newest and most compact model, has the operating capacity and hydraulic system to handle most landscaping applications. A third-function hydraulic system is standard, allowing for easy operation of things like augers, brooms, grapple buckets and snowplows.

SDLG loaders also come with a skid steer coupler. “Any other attachments you have can be hooked up to this loader,” Tullo points out. “This is a turnkey machine, which is what a lot of landscape contractors are looking for.

“We’ve seen appreciation for the simplicity of these machines,” Tullo continues. “Much of today’s equipment is fairly complicated and in need of a lot of operator training. Owners like that these loaders are easier to operate and easier to maintain. It’s a niche market, but it’s a very important part of the market.”

Landscape and nursery is an important segment of that niche. Tullo sees some applications where a skid steer or track loader is probably the best option, such as backyard landscaping on existing properties where a smaller footprint and tighter turning radius are needed. But on new construction, a compact wheel loader powering numerous attachments could be a highly productive option. Snow removal is also an ideal application, especially if servicing properties where you want to use a 10-foot blade or 6- to 8-foot pusher.

The best-suited application for a compact wheel loader is hauling and loading. “If you have a mulch yard or nursery, for instance, this is where a wheel loader really comes into play,” Tullo says. “At the SDLG price point, you can afford to go from a skid steer, which has a lower ground speed, into a compact wheel loader where you have faster speeds, a working cab, a bigger bucket and more productivity.”

Speaking of productivity, one area of the SDLG loader that has not been de-spec’d is the engine. That said, some complexity and cost has been removed.

The L918F uses a 74-hp Deutz Tier 4 Final engine. “That means we don’t have to put any complex emissions technology on the engine for that rated horsepower,” Tullo says. “We don’t have to worry about diesel exhaust fluid or a diesel particulate filter. With this engine, you have passive regen through a diesel oxidation catalyst. This is great because contractors do not have to regen the engine, which results in fewer parts and more reliability.”

Service support is a key factor for equipment-shopping landscape contractors. SDLG has an established network of dealers that knows how to serve the construction and landscaping industries very well. SDLG has been in a joint venture with Volvo Construction Equipment since 2007. Volvo dealers throughout North America are exclusively representing the SDLG wheel loader line.

Parts support is a second consideration. Some Chinese companies have earned a reputation for poor parts fulfillment. Tullo points to an important distinction with respect to SDLG.

“SDLG parts are actually out of Columbus, OH,” Tullo says. “This is always the first question you hear from contractors when talking about a Chinese or even Korean brand. There is a natural concern about getting parts. Right now, we’re running at a roughly 98 percent availability. Plus, we direct ship to either the dealer or end customer overnight. I think those are two very important points.”