Report details the impact of Covid-19 on outdoor service companies 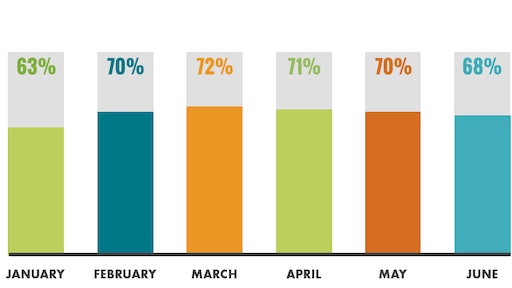 SingleOps, a leading business management software for outdoor service providers, has released its quarterly report tracking the health of the green industry. A key takeaway from SingleOps’ Q1/Q2 2020 Green Industry Economic Report is that outdoor service companies, including tree care and landscape specialists, have weathered the pandemic fairly well so far, despite some volatility along the way.

The SingleOps Green Industry Economic Report includes data from hundreds of thousands of one-off commercial and residential jobs performed by outdoor service companies in North America using the SingleOps platform between January and June 2020. Examples of one-off projects in the SingleOps system include the removal of a fallen tree, a storm clean-up, a flower bed installation or construction of a retaining wall.

For the first six months of 2020, 56% of one-off tree care and landscaping jobs totaling over $256 million were accepted* by outdoor service companies using SingleOps’ system. The proposal acceptance rate was 45% for tree care companies and 66% for landscapers. Digging deeper, the tree care acceptance rate was 52% in January before plummeting to 32% in February, only to rebound to 54% in March and 53% in April; the months of May (50%) and June (48%) weren’t as strong.

Despite the global pandemic, proposal acceptance rates for landscape companies held steady over the course of the last six months. Among landscaping companies, January’s acceptance rate was 63%, February jumped to 70%, and March (72%) and April (71%) were stable, to 70% in May and 68% in June.

“Over six months have passed since we published our first Green Industry Economic Report, and despite all the chaos wrought by Covid, our industry has proven resilient,” said Sean McCormick, CEO of SingleOps. “With people now spending more time than ever in their yards, home improvement projects are popping up everywhere. While we understand that tough times may yet lie ahead, we remain confident that the green industry will weather the storm and pull through stronger than ever.”