Two new engines, a better understanding of Kawasaki, and helping to fee the hungry 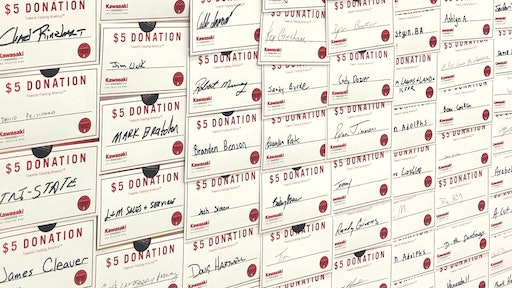 With an existing broad line of engines found in the chassis of more than 40 industry OEMs, Kawasaki used this year’s indoor display at October’s GIE+EXPO to highlight two about-to-be-released new powerplants and educated attendees about key parts of  the company’s development process.

To top things off, visitors to the display got to participate in the donation of more than 103,000 meals to food-insecure families.

The new engines slated for 2020 release included the FX1000V EFI and the FT730V Carbureted units, which were given prime position at GIE and attracted attention from all facets of the industry. Detailed information, nor photos have been released on the new engines. The company did post the horsepower ratings for the FX1000V EFI, rated at 38.5HP.

“They represent another stage in a continuing roll-out of new engines that are developed to fit the needs of the OEM community, our dealers, and landscapers,” According to Karen Howard, director, dealer sales support and marketing,

These were communicated in ways both educational and fun.

Among the displays were two that actively involved visitors.  One allowed them to hold different parts of engines and then use their fingers on a touch-sensitive table video display to graphically move parts in and out of a complete engine.

The other let them see how Kawasaki utilizes 3D printing as a culminating step in the R&D development process; a handheld scanner provided the first step—followed by a unique 3D printer demonstration—as an example of how production part quality is created.

And, after making their way through areas of the display addressing the four key characteristics, visitors were provided a Kawasaki hat and signed a donation recognition card signifying a $5 donation in their name made by Kawasaki to Feeding America, the nation’s largest domestic hunger-relief organization.  It works through more than 200 local food banks in the U.S.

The cumulative donation to Feeding America will provide 103,000 meals to those in need.  This is the second year that Kawasaki has partnered with the charity to help reduce the incidence of food-insecurity and exceeded last year’s initial effort which raised enough funds to provide 88,000 meals.

The donation marked the company’s new membership in Feeding America Enterprise Society, a group of businesses committed to the hunger relief organization’s vision of a hunger-free America.

“We’re all heartened by the support shown by the industry and take great pride in the contributions we have collectively made,” Howard said.  “This represents a very fulfilling way for Kawasaki to use the GIE platform to educate show attendees about our engines, accessories, and programs.”

Last year was Kawasaki’s initial involvement with Feeding America, prior to joining the organization’s Enterprise Society.

“Our broadened commitment to Feeding America means that Kawasaki will continue to integrate the values expressed by the organization as we play a role in helping to generate financial support on a long-term basis,” she added.

As it does at each GIE, Kawasaki gave attendees an opportunity for hands-on experience with a number of different Kawasaki-powered units.

A major highlight of the outdoor display was the learning experience attached to Kawasaki’s new wireless KEI diagnostic tool for use with its growing line of EFI engines, the newest of which is the FX1000V EFI, which was shown indoors.

This summer we’re offering our award-winning gps tracking system with no up-front cost, starting at just $8.75 /month on a 12-month contract. Find out more.
August 11, 2020
Latest

This summer we’re offering our award-winning gps tracking system with no up-front cost, starting at just $8.75 /month on a 12-month contract. Find out more.
August 11, 2020

How Much Should Outdoor Power Equipment Mechanics Make?

Outdoor power mechanics and other small engine mechanics earn an average of $25,000 to $55,000. How much should you be making or paying your technicians?
Brenda Echeverria
January 20, 2020