In 2015, Hustler announced its plan to sell zero turn mowers through Home Depot and Lowe’s in a test run 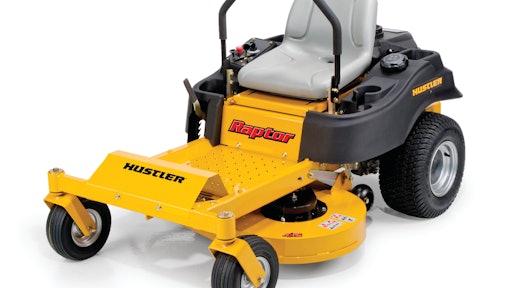 In a letter to their dealers on February 21, 2014, Excel Industries announced it will sell select Hustler zero-turn mower models at Home Depot and Lowe’s. The Raptor and Raptor SD mowers will be part of the test run. The majority of sales will be online-only, with in-store sales limited to the Hustler Raptor 60 SD.

In the letter, the company cited the move to Big Box as a means to build name recognition for the brand while reaching zero-turn buyers who shop at stores like Home Depot and Lowe’s. Ideally, the Big Box will build better brand awareness among consumers than just manufacture and co-op advertising.

“There is a reason why Cub Cadet, Husqvarna and Toro are all household names,” says Adam Mullet, director of marketing for Excel Industries. “They are all sold in dealers and mass retailers. There are just so many more eyes looking at your product and it becomes a household name.”

Excel is positioning this move as a “win-win” for the manufacturer and dealers, saying the brand awareness and equipment purchases will drive consumers to their local independent dealer for parts, service and future sales.

A plan that was in the works

Green Industry Pros contacted several dealers across the U.S. to get their take on the news that Excel Industries will be selling select Hustler mowers through Home Depot and Lowe’s. One dealer we spoke with said he was not at all surprised. He was already feeling disheartened by the manufacturer and says he saw the strategic move coming.

“I talked to them about my concerns when they first started building the low-end equipment and introduced BigDog (another mower brand),” the dealer shares. “Anytime any company starts integrating cheap equipment into their commercial stuff, it’s a sign. I saw the same thing with Snapper.”

Excel does not deny that was their plan. “We made the decision several years ago to look at retail outlets outside of the dealer,” says Mullet. “We looked at our main competitors and they are all selling in one mass retailer or another. We felt that to be competitive we needed to be there as well. There is a chunk of customers who were going to buy from that store no matter what brand they are selling. At least we have a shot at that customer. If we are not there, we lose the sale to a competitive brand and the dealers lose that customer for service or an upgrade.”

The dealer wouldn’t say what his future plans were regarding his relationship with Excel but said he does feel somewhat trapped in it all.

“It’s hard to do anything about it because you know you have so much product out there and you want to support it.”

Lonnie Bohrer of Mowers Inc. in Sarasota, FL, has been a Hustler dealer for 10 years and says he also anticipated the move and sees it as a smart one for the mower manufacturer. “In the back of my mind when they introduced the Raptor line, I thought this was what they might do because it is was what any smart manufacturer would do,” says Bohrer. “If all the other small manufacturers were able to do it, they would do it, too.”

The sales manager at one dealership has felt the blow from Snapper and Ariens already and was not happy to hear Hustler is taking a step in the same direction. “I am surrounded by Home Depot and Lowe’s and to know that Hustler is going to have their product there is really disappointing. It will definitely keep people from coming into our store.”

For dealers who don’t have a Lowe’s or Home Depot in their area, the new competition may still be an issue. “We don’t have a lot of Big Box stores close in my community, but people will travel to buy it.” And those purchases will be made even easier considering the online availability of the equipment.

Dealers are concerned that this step shows Excel doesn’t view the dealer as an important partner. “It sounds like Hustler doesn’t value the dealer very much and is looking to hurt the dealer,” says a dealer. “Why would you want to be a dealer for that brand if they are going to undercut you at the Big Box where they are probably going to sell it for 10% less than the dealer because they are buying at an enormous volume?”

Mullet assures there will not be a pricing difference. “We do have a policy for the minimum advertised selling price and that price is the same whether you go to lowes.com, homedepot.com or your dealer,” explains Mullet. “If they advertise selling prices below those prices, there are ramifications. If the dealer can sell his service and knowledge, then he should win out every time if the price is the same. Dealers by far and away sell more product than mass retail in my opinion ever will.”

Bohrer sees the move to Big Box not only putting the Hustler brand on the consumer’s radar but also the independent dealer. With a customer base that is mostly commercial cutters, he says he hopes to now see more homeowners in his dealership.

“The homeowner was going to shop there regardless,” says Bohrer. “There is a chance they will leave there looking for another Hustler dealer and that opens up their eyes to independent lawn equipment dealerships. A lot of homeowners do not know we even exist. Don’t focus on that one homeowner customer. You aren’t going to lose them because you never had them.”

Some dealers aren’t buying Excel’s spin on the “win-win,” with one saying: “They are telling us we are going to have more service, but we won’t. If a customer goes out to buy a cheap zero-turn mower and then brings it in for repair and the shop labor rate is around $80 an hour, they will walk out and buy a new mower before paying $500 in repairs.”

Speaking to the same issue, another dealer said he would gladly offer service and parts, but as he sees fit. “Sure you can make it up on the repair side, but I won’t be so anxious to make that customer a priority. I’ll fix them, but they are going to sit.”

Bohrer, who also sells Toro, says he has already seen a lot of traffic from Big Box store customers who are seeking warranty and service work for their Toro mowers. He is ready for the same opportunity with the Hustler line.

“If I have to I’ll hire another 10 mechanics. If I am getting more people through the door and see an increased workflow, I can get more help,” says Bohrer. He encourages other dealers to work with their local Home Depot or Lowe’s on a service referral plan. “Talk to the manager and give them a stack of cards to give their customers,” he advises. “Think of the positives and how you can make money off of it, rather than the negatives and lose money on it.”

The test run of selling product through Home Depot and Lowe’s will be for the 2014 sales season. Mullet says they anticipate a successful test run and will evaluate the line and the retailers’ performances when the season ends.

“I expect it to go really well because we have a great product for the customer considering the price, a Kawasaki engine and the fabricated deck,” Mullet explains. “We will just need to evaluate with those retailers after the season is over how it went and if it met or exceeded their expectations, and we will decide where to go from there."

After a successful test run, the in-store availability would increase. Currently, the mowers are only seen on the sales floor of a few locations in the southeastern section of the U.S. with a strong concentration in Texas.

Taking Control of Your Growth Potential