Who mows the land on the National Mall and when do they do it?

Landscaper Fredy Umana, 33, is one of the few people responsible for mowing the lawn on the National Mall. 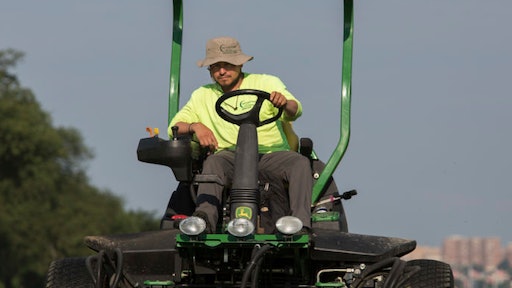 The grass on the National Mall stands up to the foot traffic of roughly 36 million people a year. Tourists, protestors and recreational sports leagues trample the emerald turf on a regular basis. It’s the most visited national park in the U.S. But have you ever caught a glimpse of the people that cut the grass?

Emily Fuji of Rockville, Maryland, hasn’t either. But she’s always been curious about who mows the lawn on the National Mall and when they actually do it. So, she decided to reach out to WAMU via What’s With Washington.

“I keep having a vision of a guy in one of those residential riding mowers mowing the lawn in the middle of the night or something,” Fuji says.

“This landscape is not about our ability to mow. It’s not about our ability to make patterns. You don’t want to detract from the overall grandeur of the landscape by busying it up with a bunch of lines going a bunch of different directions,” says Michael Stachowicz, turf management specialist with the National Park Service, about the simple vertical pattern seen in the National Mall’s turf.