New powertrain technology is expanding the limits of efficiency and performance 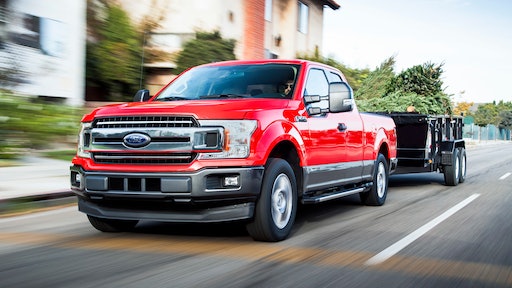 The Ford F-150 with the 3.0-liter Power Stroke diesel engine is targeted to return an EPA-estimated rating of 30 mpg highway.
Ford

The three best-selling vehicles in the United States are full-size pickups: Ford F-Series; Chevrolet Silverado; Ram Truck. This makes dominance of the ½-ton pickup truck category a true battleground for the manufacturers.

Increased fuel economy ranks near the top of customer demands. Unlike their larger ¾-ton relatives that are primarily used for towing applications, the ½-ton pickups are often used for commuting. This places a greater emphasis on the cost of operation.

According to Consumer Reports 2019 Automotive Fuel Economy Survey Report, 88% of American adults agree that automakers should continue to improve fuel economy. Drivers of large SUVs and pickup trucks are almost twice as likely (55%) as drivers of small or mid-size vehicles (30%) to select fuel economy as a desired improvement. Seventy three percent of people driving a large SUV or pickup truck express an interest in getting a vehicle that is more fuel efficient regardless of their assessments of their current vehicles fuel efficiency.

There is a contradiction between the truck manufactures’ efforts to increase fuel economy and the perception by consumers. According to the report, only 34% of Americans agree that automakers care about lowering fuel costs for their customers. The reality is that the competitive landscape demands that full-size pickup truck manufactures address pressures to increase fuel economy.

Manufacturers have stepped to the plate with several new product offerings. These include diesel engines, advanced controls for gasoline engines, hybrids, eight- and ten-speed transmissions, start/stop technology and more.

Even a few years ago it would have been hard to imagine a full-size pickup achieving 30 mpg. Now there are several options that exceed this mark. The diesel engine is the most significant technology driving these impressive fuel economy gains in the full-size pickup market.

Diesel engines are typically more efficient and provide more low-end torque than similar-size gasoline engines. Diesel fuel also contains 10 to 15% more energy than gasoline does. These two factors mean a diesel-powered vehicle can travel 25 to 35% further on a gallon of fuel than its gasoline-powered counterpart.

Think of a traditional internal combustion engine as a large air pump. The pump that moves the air more efficiently will get the work done with less effort. A higher compression ratio allows the engine to extract more mechanical energy from a certain quantity of fuel.

In the past, a downside to the diesel engine was the ‘dirty’ image and cold-weather start ability issues. Pre-emission control diesel engines tended to produce black smoke at startup and when pulling heavy loads. And since there is no spark plug, they rely on the heat of compression to ignite the fuel. When it is cold out, this fuel condenses on the cylinder walls, making it more difficult to start.

The negative perceptions surrounding the diesel engine still persist, even though the reality is quite different. This may partially be due to the fact that diesel engines typically have long lifespans and many of the older technology diesel trucks are still on the road.

Modern diesel engines with Selective Catalytic Reduction (SCR) technology have cleaned up the tailpipe emissions. More than one truck manufacturer has held a white cloth over the tailpipe of a running diesel to prove that diesel smoke is a relic of the past. Sophisticated electronic controls and a steady improvement in glow plug technology. have pretty much eliminated cold-weather start ability issues. Just make sure the tank is filled with winter blend fuel so it doesn’t gel when the temperature drops.

Prior to the introduction of the Ram 1500 EcoDiesel in 2014, diesel engines were pretty much limited to 3/4-ton and larger pickups. Now all of the three major North American full-size pickup truck manufacturers offer a ½-ton pickup with a diesel engine option. The main driver has been to increase fuel mileage without decreasing performance.

Ford introduced the 3.0-liter Power Stroke diesel F-150 for the 2018 model year. At that time, it led half-ton fuel economy with an EPA-estimate rating of 30 mpg highway, 22 mpg city and 25 mpg combined. This was accomplished without sacrificing capability. The 3.0-liter Power Stroke pumps out 250 hp and, more importantly, 440-lb.-ft. of torque. The torque helps the F-150 achieve 11,400 lbs. of towing capability

The company targets performance with 277 hp and 460-lb. ft. of torque in addition to focusing on fuel efficiency. This engine is capable of delivering 95% of peak torque at just 1,250 rpm. It then offers a flat torque curve that sustains peak torque from 1,500 to 3,000 rpm.

The third generation EcoDiesel is not a warmed-over version of the previous offering. It is a fresh design with over 80% new components. This includes revolutionary technologies such as a low friction Diamond Like Coating (DLC) on the piston pin and piston side skirts to reduce friction and a 0.3 mm piston pin offset to reduce piston noise caused by piston slap. Piston slap is a major contributor to that classic “diesel sound” many of us have grown accustomed to over the years.

Diesel engines are not the only options for increasing fuel efficiency. Gasoline engines typically have a lower purchase price than their diesel counterparts and have been the mainstay of the ½-ton pickup market. Engineers have spent considerable R&D to offer more fuel-efficient gasoline engine options for full-size ½-ton pickups.

Ford has expanded upon its EcoBoost philosophy to increase the efficiency of the company’s gasoline engines. EcoBoost engines combine turbocharging, direct fuel injection and twin independent variable camshaft timing (Ti-VCT) for power and efficiency. This allows smaller-displacement engines to pump out more power than some larger displacement engines, increasing the overall efficiency.

For the 2018 model year, Ford put its second-generation 2.7-liter EcoBoost gasoline engine, mated to a 10-speed SelectShift automatic transmission into its F-150. This resulted in an EPA estimated rating of 20 mpg city, 26 mpg highway and 22 mpg combined. Despite its small displacement, this engine pumps out 325 hp at 5,000 rpm and 400 ft.-lb. of torque at 2,750 rpm. For customers who need more performance out of their gasoline powerplant and still want to maximize fuel efficiency, Ford also offers a 3.5-liter EcoBoost and a 3.5-liter high-output EcoBoost.

General Motors recently rolled out a more advanced cylinder deactivation system called Dynamic Fuel Management. It temporarily shuts off between one and seven cylinders in a variety of different configurations depending upon needs of the customer and the load that the pickup is experiencing. Dynamic Fuel Management works by controlling engine oil flow via special valve lifters on each cylinder that activate or deactivate each cylinder via a software algorithm. The system operates in concert with the throttle system and provides only the power required, thus dramatically improving efficiency.

Ram Truck has taken half-ton pickup gasoline powertrain technology in a new direction - hybridization. But this technology is much different from past hybrid systems from the various manufacturer.

eTorque increases the pickups’ launch performance as well as fuel efficiency. It adds up to 90 lbs.-ft. of launch torque to the 3.6-liter V6 and up to 130 lbs.-ft. to the 5.7-liter HEMI V8. The eTorque system results in a 2 mpg city and 2 mpg combined fuel economy benefit.

The V6 and V8 engines with eTorque retain a conventional 12-volt starter motor, used for cold starts and first start of the day due to its greater efficiency in extreme temperatures.

In addition to spinning the engine for restarts, the eTorque recaptures energy during deceleration and braking to feed charge to the battery pack. eTorque also enhances the vehicle’s driving experience by adding torque to the crankshaft during gear changes to minimize noise, vibration and harshness.

Stop/start technology helps optimize efficiency in city driving. The engine automatically restarts when the driver takes their foot off the brake. All of the Big Three offer start/stop technology on their 2019 pickup offerings. These systems are most effective in stop and go traffic.

Some of these systems are automatic and some can be switched off at the preference of the driver. For those that don’t like the system, it usually turns on every time the vehicle is started, therefore it must be disabled every time the vehicle is started. Driving a pickup with start/stop for the first time can be a little unnerving as you hear nothing but silence at the stop light and the engine rpms drop to zero. Taking your foot off the brake immediately brings the engine back to life.

Ford has made start/stop standard across the F-150 lineup. In its applications, Auto Start-Stop deactivates when it wouldn’t be needed, such as when you’re towing a trailer or running in four-wheel drive.

By having more gear ratios, it is possible to keep an engine near its ideal operating speed most of the time. The transmission’s wider overall ratio enables a lower numerical top gear ratio, an attribute that reduces engine speed on the highway and results in increased fuel economy.